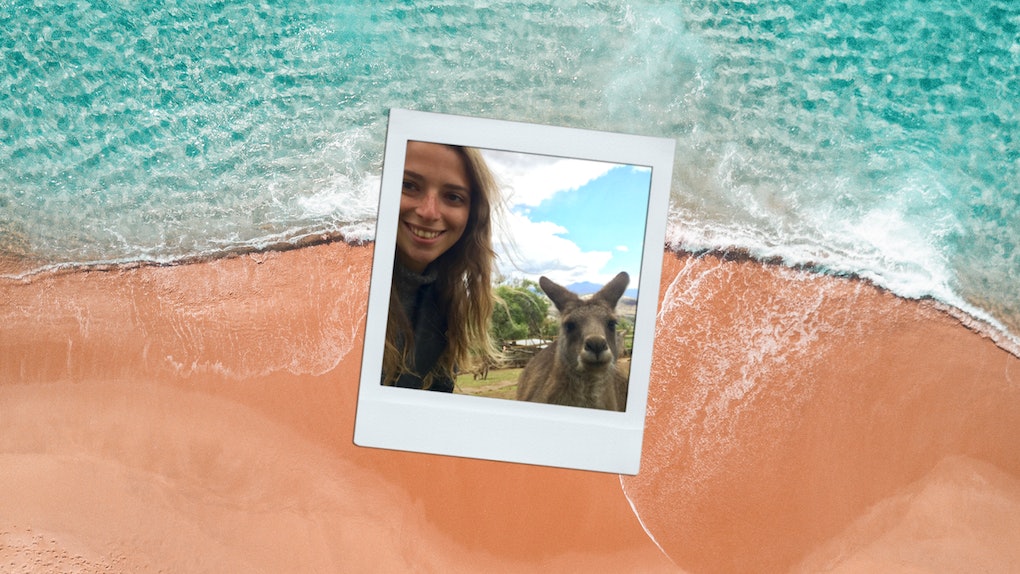 I Moved To Australia Alone, Without A Plan & It Changed My Life Forever

After spending my junior year abroad in Florence, Italy, all my carefully laid plans to live in New York my whole life were upended. Suddenly, the idea of only living in one place forever seemed inconceivable. When it became clear that my post-grad fellowship at a website wasn’t going to turn into a permanent position, I took it as a sign to leave the city I’d called home since I’d moved there for college at 16. I applied for the working holiday visa in Australia and bought a one-way plane ticket to Sydney. I was going to move to the other side of the world alone, and I couldn’t wait.

I felt ready as the time got closer. The visa application had been a breeze with my acceptance coming in almost immediately after I'd submitted the paperwork. If you’re not familiar, a working holiday visa is a type of working visa geared toward people whose primary purpose of visit is to travel and explore. The visa also allows you to work when needed to support your travels. I was choosing between Australia and New Zealand, both places I had visited briefly seven years earlier. My plan was to go as far as I could — to somewhere I wouldn’t want to move to when I was older. In the end I chose Australia due to its size, knowing New Zealand would be more manageable as a visit.

What would Australia offer me, considering I knew no one there? Everything, it turned out — but I had no way to know that at the time.

It wasn’t until maybe a week and a half before the move that my anxiety began to act up. I have a panic disorder, and it really hates change. Even on 10 mg of Lexapro, I faced episodes where my brain was convinced I shouldn’t go and that this whole plan was a huge mistake. Why was I leaving New York, a safe and familiar place I knew and loved, filled with friends? What would Australia offer me, considering I knew no one there? Everything, it turned out — but I had no way to know that at the time.

I set up a gig where I could work remotely as a part-time writer while also lining up some freelance jobs. Combined with the money I’d saved up from writing, this meant I didn’t need to find work in Australia right away. I had seen a therapist every week in the month or two before I left. So, with her guidance, some serious meditation, and reassurance, I boarded a plane to Sydney in December 2017, just a few months after I had turned 21 years old.

I had planned to live in Sydney, using it as a base while I traveled around Australia, just as I'd used Florence as a jumping off point to visit other cities in Europe. However, I hadn't realized how far each city was and how costly the flights would be to get to them. That, combined with the fact that I didn't end up liking Sydney very much, convinced me I needed to change my plan.

I ditched my suitcase, bought a 55-liter backpack, shipped most of my clothes home, and bought a plane ticket out.

All I Needed Was My Backpack

On the last day of January 2018, I headed to the Sydney airport and flew to Hobart, Tasmania. I had always wanted to go to Tasmania. It's south of mainland Australia so it's very cold unless you go in the summer — and this was my chance. I went from being someone who once took two overweight suitcases to Florence to someone who now carried only a 35-pound backpack and a small bag for my laptop, and had nothing planned beyond a one-way ticket to Tasmania and a hostel booked for three nights. I had no idea how long I’d stay in Australia or what I’d do next. All I knew was that it was all up to me. That’s the beauty of solo travel — you very seriously get to just do you.

I Made Lifelong Friends During My Travels

In the months that followed, winging it somehow paid off. Almost everyone I met was also traveling alone, making it easy to connect with people as I moved around. I'd sit next to a stranger at breakfast and by lunch, we'd be off on an adventure together. I wish making friends in New York was that seamless.

There are two friendships from my time away that stand out to me. While visiting New Zealand, I boarded the first bus of many I'd take over six weeks and struck up a conversation with the guy across from me. We bonded immediately and traveled around the northern island together. A few weeks later, when I fell and hurt my back and was unable to carry my bag, he helped me and carried my stuff to and from the bus. After I'd moved to Brisbane, he came to Australia for the last month of his travels and it felt like an old friend coming to visit.

When I left Brisbane, I was so sad, having truly learned how home and family can be created anywhere.

Two weeks after I arrived at a hostel in Brisbane, a girl from London moved into the bunk across from mine. We both planned to stay for a few months and quickly became friends, spending evenings cooking meals in the shared kitchen and staying up late into the night, chatting in one of the lounges. It felt like a never-ending sleepover. Although I had come alone, I quickly forgot that. She and I made friends with other people staying at the hostel long-term, taking day trips to nearby beaches, going to events in Brisbane, or just staying in and watching a movie. With the number of non-native English speakers we befriended, I quickly got used to watching Netflix with subtitles.

When I left Brisbane, I was so sad, having truly learned how home and family can be created anywhere. After heading up the coast — notably seeing koalas in the wild — I flew to Perth at the end of July, my last move.

While at first I worked for accommodation in a hostel, I quickly moved into an apartment. (Perth hostels are better for the short-term stay.) This, combined with the fact that fewer people visit the west coast, meant it was harder for me to meet other travelers. Through my work managing a store, I made friends and was lucky to have a great roommate. I also used Tinder for the first time, hoping to meet friends on it. Spoiler: I fell in love instead. (Yes, with someone I met on Tinder. It's better there, I swear!) Through my relationship, I met even more kind locals. While I'd mostly been interacting with fellow travelers up until that point, in Perth I was fortunate to see the other side of things and meet so many people who called Australia home.

My Visa Had To End At Some Point

The working holiday visa lasts for a year in Australia, with the option to do a second year if you complete 88 days of farm work. My first week there I decided I would only stay up to a year, knowing there were so many other places in the world I wanted to explore.

I never expected to stay an entire year and certainly didn't know how hard it would be to leave. I felt ready to head back to New York to see my friends and work more consistently as a writer, but I had created a home in Australia and, honestly, was devastated to leave my relationship behind. On top of all that, the idea of heading to a cold, dark place when weather like Australia's existed seemed impossible.

Yet, nine days before my visa expired, I left. It took almost two days to get back to New York — Perth is the farthest city in the world from it, after all. Transitioning back was harder than I imagined and the first week I barely got out of bed thanks to a combination of jet lag and depression. The guy I fell in love with is now my ex, but having to end a relationship due to circumstance has been harder than I could have imagined. Still, I couldn't be more grateful that I met him.

Almost four months later, the sun is out longer, I'm working more than ever as a freelance writer, and I'm happy again. I hope to one day visit the world down under again — and I'm thankful to have another place in the world to call home.