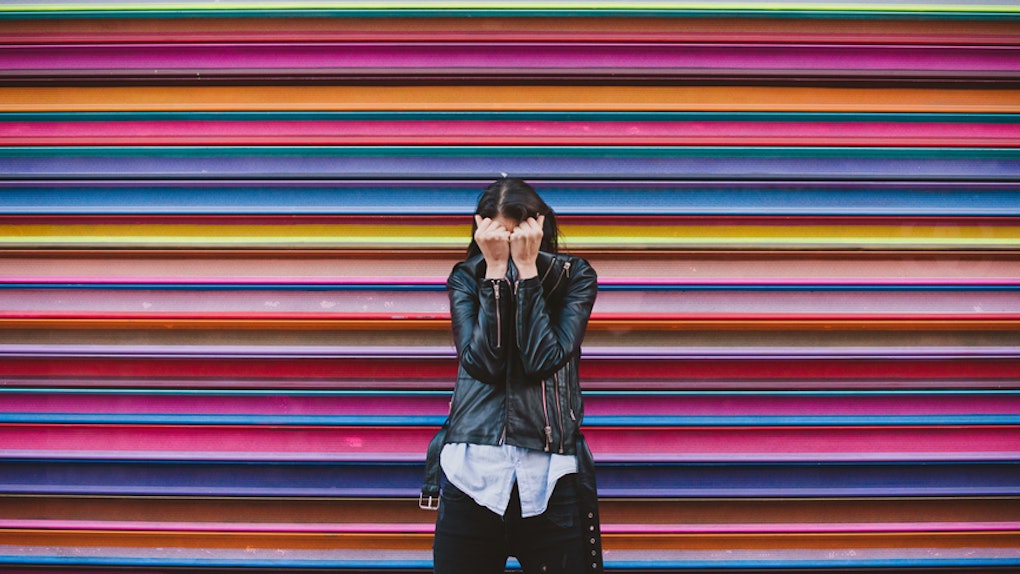 I woke up with cake in my hair, a prescription bottle of Xanax on my bedside table, and murky memories of the night before: The pacing. The frustration. The deep breaths I forced myself to take, over and over and over again. "All over a stupid boy," I think. "Anxiety and dating make a great freaking combo."

Why, you ask? Well, you see, a boy I'd had heart eyes for since I was 14 had drunkenly kissed me at a wedding. About a month later, he flew to New York to hang out with me for a long weekend, and I fell as deeply in love with him as a person can in just four short days. Fast-forward another month or so, to the moment he'd ignored my third text in a week — a week marked by stress in every other facet of my life, no less — and I noticed a new girl in his Instagram photos.

And I started having a full-blown anxiety attack.

"He hates me and who is this girl and why does he like her and why the hell doesn't he like me? Why is everything so out of control? Why can't I keep anything in check?" I asked myself, blaring Beyoncé and practically sprinting around my studio apartment.

My head started spinning, breathing felt impossible, my face became sticky and salty from the sweat and tears. That's when I decided that Xanax might be a good idea (my psychiatrist had instructed me to "take it as needed," and this definitely felt like one of those moments). Not long after that pill kicked in, cake seemed like a good idea, too.

Now, before I jump into how this all came to be, I want to clear up a few misconceptions.

Misconception Number One: "Being anxious" is not the same as "Having an anxiety disorder." Everyone gets anxious every now and again, especially when it comes to modern dating. But when I talk about anxiety, I don't mean the "I get a little jittery and sweaty when I talk to strangers" kind. I mean the "I just threw up and broke out in hives on the middle of the sidewalk because the world feels like it's ending" kind. It goes by many names and diagnoses. In my case: General anxiety disorder, depression, and obsessive compulsive tendencies. And while it impacts pretty much everything about me, for the sake of this essay, let's zero in on how it affects my love life. Um, Not positively.

Misconception Number Two: Having anxiety does not automatically place me — or anyone else, for that matter — into the "crazy girlfriend" box. I've got my quirks, don't get me wrong, but my anxiety is also fairly well-managed and monitored. (Shout-out to the psych professionals and modern medicine to which I've been privileged enough to have access! Why this is a privilege and not an inherent human right is beyond me! That's another essay for another time!) In other words, I don't run around with mascara dripping from my lashes, wielding knives and throwing appliances, when a guy ignores my call. In fact, I've never thrown anything at a boyfriend! Or at any man!

What I have done — what I am, unfortunately, wont to do — is come to the realization that a person I'm interested in is not, in fact, interested in me and lost my cool. Not because I'm convinced that they're the *Romeo to my Juliet*, but because my self-esteem and stress levels sit on a razor's edge. And sometimes, it's 3 a.m. on a Wednesday and there's a lot going on at work or at school or at home and I haven't slept in a week and an obnoxious, uninterested text (or lack thereof) is the last thing I f*cking need.

Which is where the cake hair and Xanax come into play.

Anxiety manifests itself in many ways, and though mine is ever-present, it hits most aggressively at moments like the one above: Moments when everything already feels a little out of control, and then a quick spout of rejection (or what I interpret as rejection) sends me into a tail spin.

Given that modern dating culture is filled with these spouts — via ghosts, left swipes, and Instagram posts of girls who aren't you — I'm sure you can imagine how much fun it is to date with an anxiety disorder.

Friends have suggested that I "care less," or claimed that they can relate because they, too, get nervous before dates. And while I appreciate that their advice and "Me, too" echos are well-intentioned, the truth is that understanding what this is like is an impossible experience unless, or until, you're in it.

So, if you're not experiencing the above, well, thank your lucky stars (and maybe stop claiming you're "Having a anxiety attack" before every date?). And if you are experiencing it, just remember to give yourself some grace. You're not crazy, and you are absolutely not alone.