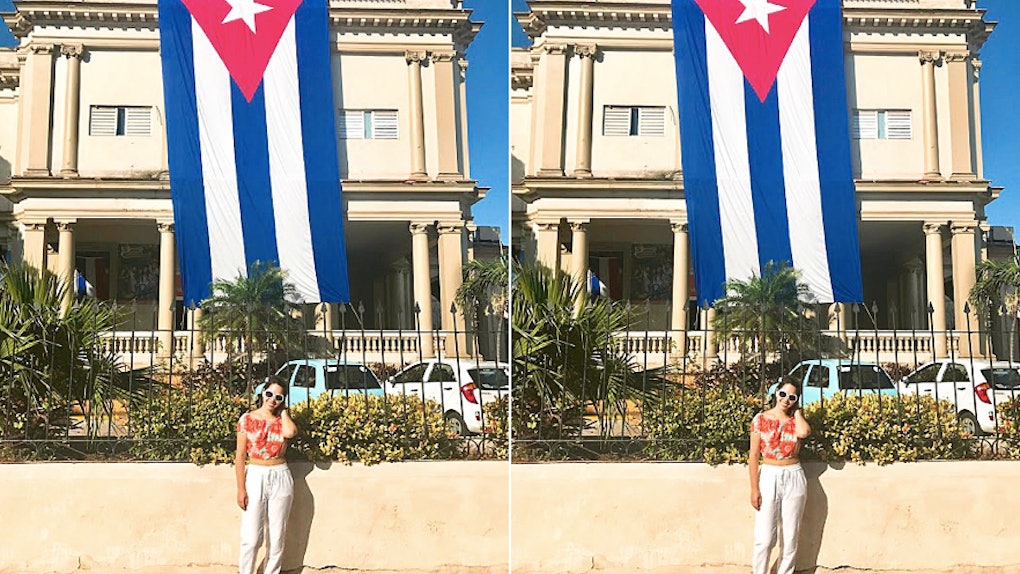 I Grew Up Not Feeling Latina Enough — Then, I Went To Cuba

This essay is part of Más Que Suficiente, More Than Enough, an Elite Daily series that celebrates the parts of Latinx culture that make each writer proud of their identity. In this piece, Elite Daily Senior Experiences Editor Kaitlin Cubria explores how a trip to Cuba helped her discover her Latinx identity after growing up not feeling Latina enough. Para leer este ensayo en español, desliza hacia abajo.

For as long as I can remember, my facial features have confused people. My sometimes olive, sometimes tan skin and my not round, but not fully almond-shaped eyes have often led people to ask me the invasive question: “What are you?” For the record, I’m Cuban, Puerto Rican, and Chinese. My maternal grandparents both immigrated to Chinatown in New York City from Taishan, China in the 1950s. My paternal grandmother was born in NYC, but her parents emigrated from Puerto Rico. Even though none of them are around anymore, I still have my memories. Unfortunately, I never met my paternal grandfather — and that's the main reason why I traveled to Cuba in April 2017.

Very little is known about my dad’s dad, Eduardo Cubria, whose last name I share. All I really know is that he immigrated to NYC from Cuba in the 1950s, before Fidel Castro came into power, and died shortly after my dad was born in 1956. Since my father never knew his father, it was difficult to find out much more, which should’ve discouraged me. However, it only fueled my thirst for more information.

At family events, when my grandmothers were still alive, I stood out as either the only Chinese grandchild, or the solo “halfsie” grandchild, on the receiving end of microaggressions even from people who love me. Things weren't any better at school; if anything, they were worse because I didn't have my parents around for support. From the ages of 6 to 18, I attended the same predominantly white school. My seven best friends in high school all checked off the White/Caucasian box on standardized tests, while I usually had to check off a box marked Two Or More Races, or simply Other. I was always "The Chinese One"; my other ethnicities were irrelevant.

If I looked more ‘Latina’, would people take me seriously?

It was easy to brush it off, at least on the surface. My mother is the product of two Chinese immigrants, who worked multiple jobs to provide for their four children, ensuring they were fed, sheltered, and well-educated. I’m damn proud of that. But that's not all that I am. I continuously asked myself variations of the same question: "If I looked more ‘Latina’, would people take me seriously? If I spoke Spanish fluently, would I be welcomed into the Latinx club? If I showed my ancestral DNA, would that be enough?" Dwelling on this felt useless — I couldn't change everyone's minds. Plus, I'd never seen a picture of my Cuban grandpa, let alone visited the island he left behind.

Then, the unexpected happened: In January 2015, the Obama Administration lightened restrictions on travel from the U.S. to Cuba. This felt like the opportunity I'd been waiting for, the piece of the puzzle I needed to secure my self-dubbed Cubanity. I knew I'd find a way to the motherland soon. But when then-presidential candidate Donald Trump announced his plans to reverse President Barack Obama's Cuba policy in 2016, I knew the window to visit Cuba and discover my family history was at risk, and after Trump's election, it felt even narrower. So I brushed up on the Spanish I hadn't utilized since 11th grade and bought my roundtrip tickets to Havana, Cuba. It felt like it was now or never.

I know traveling to Cuba as a tourist is fraught with feelings, and I can understand why. The amount of influencers taking pictures in low-income areas of the country to post colorful, trendy photographs on their Instagrams for likes irks me to no end. But as a person with Cuban heritage, visiting Cuba was an opportunity for me to explore my own identity. (I’m not against people without familial connections traveling to Cuba, so long as they acknowledge the Cuban people have been ruled by a Communist government for decades, and that those visiting try to spend their time — and, more importantly, money — benefitting the Cuban people, like I hope I did.)

I flew to Havana with my non-Cuban husband in April 2017. I had no plans to find records about my Cuban grandfather — since I had so few details to go off of in the first place — but I had high hopes that being in his homeland would give me that connection I'd always been missing.

Rather than check in at a government-run hotel, we opted to stay at an Airbnb in Vedado, a neighborhood west of Old Havana. Our host, Jaime, who was born and raised in Cuba, helped us map out a potential itinerary, even organizing a trip for a fellow local to pick us up the next morning to take us to Viñales, a small town in western Cuba known for its brightly colored, colonial-era wooden houses and sprawling botanical gardens.

Traveling to Viñales was like being transported back in time — almost to the era when my grandpa still lived in Cuba. We made our way there in a 1957 Chevrolet Bel Air. Though the old-timey cars make for great photo opps, according to our tour guide, a majority of Cubans still drive them due to restrictions imposed in the '50s, which banned the import of foreign cars.

Hours after we were picked up, we got to experience one of the less "Instagrammable" sides of Cuba while visiting a local tobacco farm. I discovered that workers only get to keep and sell 10 percent of what they grow — a fact I still have a hard time processing more than two years later. On a separate excursion, we ate an enormous seafood dinner that cost nearly nothing — an incident that showed us how prices on the island are intentionally suppressed by the government with the dual currency system. Both of these events drew a line in the sand for me, showing how vastly different the American way of life is compared to the Cuban way of life. Needless to say, we left a large tip at the restaurant.

Despite ongoing reminders of how Cubans have continually been oppressed by their government, I began to feel at home. Steps away from the restaurant is an area called Barrio Chino de La Habana, aka Chinatown of Havana, and seeing Chinatown in Cuba tugged at my heartstrings. It's a combination of two of my deepest identities. All I needed was a Little Puerto Rico next door, and I would've been set. Even though I had no clue how to find new information about my grandfather while I was in Cuba, I wondered if he felt as at home here growing up as I felt just visiting.

Despite never meeting Grandpa Cubria, I now feel a deeper connection to him than I had before my trip to Cuba. I'll never know if I walked down the same roads he did, or ate at the same places, or if I rode in the same kinds of cars. Still, it felt like it was possible — and that was more than I'd ever been able to say before. Now, my dad, who had previously never shown interest in visiting Cuba, wishes to take the trip to hopefully find our ancestral connections.

Less than two months later, Trump directly opposed Obama's efforts to foster friendlier relations with the Cuban government, outlining a policy that makes it, once again, tough to visit the area as a tourist. Traveling to Cuba now feels like the trip of a lifetime in more ways than one.

Being in Cuba showed me how being Latinx — or any other ethnicity — isn’t just about speaking a particular language, being born in a specific country, or looking a certain way. It’s about your roots — not necessarily knowing everything about them, but embracing the culture, the food, the people, and connecting with them. Even if I never find out what my grandpa looked like or if we walked the same streets, I'll never stop trying to find ways to connect to him, and to this side of myself. You can’t spell Cubria without Cuba, and I wouldn't be me without being Latina.