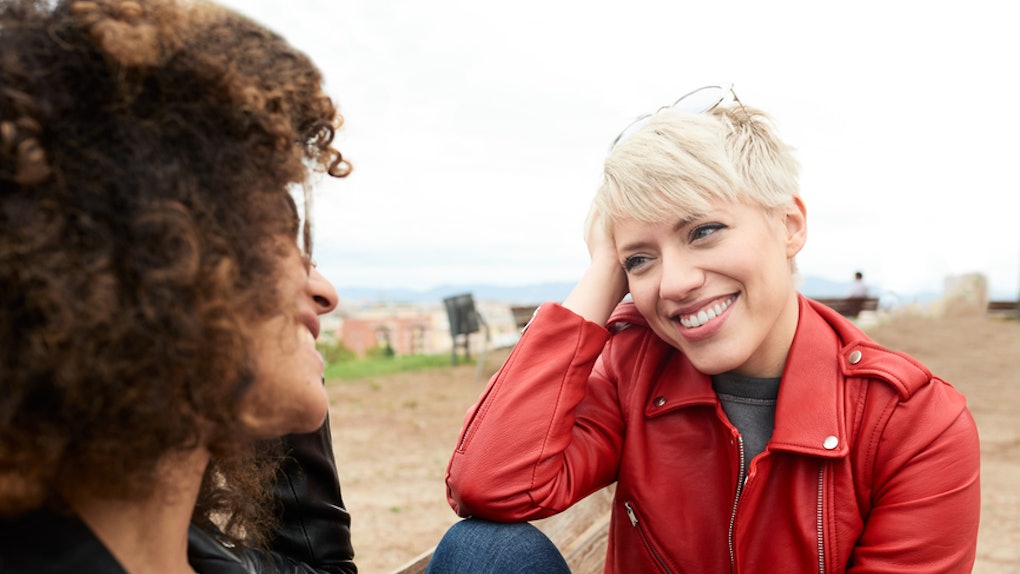 Max was my single-minded high school obsession. She wore safety pins as earrings and had super short platinum hair, often styled into a faux hawk. She had big blue eyes — like freakishly huge — when she looked your way, you could feel it. She was thin and brooding and always wore leather jackets and skinny jeans. She sang in a band (I can still remember the lyrics to one song called "Stop, Drop, and Roll"). I was practically Helga from Hey Arnold with my secret, all-consuming crush. I was in love with her.

She wasn’t gay (yet!), so I could only admire her from afar. Even if she was out, I would have been too scared to hit on her. All of the punk kids like Max used to hang out at this open mic in a bowling alley (ah, counterculture youth on Long Island — so weird, so strange). I would beg my Guidette friends who had absolutely no interest in punk music to come with me. So as not to look too obviously obsessed with Max, I’d bowl instead of dancing in front of the bands. In between gutter balls, soft pretzels and Cherry Pepsis, I’d steal glances at Max, pouring her voice into the microphone, her fist raised to the rickety ceiling. My heart would skip a beat.

My junior year, Max and I were in the same dance class. Before class, we were required to take our shoes off prior to stepping on the dance floor. I actively avoided her until one day, she walked right up to me and said she liked my jeans (yay!). And then I took my shoe off and cut her with my toenail (boo!). Like, literally sliced her foot with my toenail. Could you just die!!!! I don’t even know how it happened exactly. I think I blocked it from my mind. After the toenail incident, we still made small talk in dance class. After high school, we fell out of touch.

In the years between high school graduation and the advent of Tinder, I forgot about Max. I dated and hooked up with lots of women — instead of admiring them from afar and stalking their bands. One night, after a particularly bad breakup from my college girlfriend, my BFF (read: a bottle of rosé) coaxed me into making a Tinder. I liked Tinder just fine, mostly from the intense surge of power I’d get from seeing the words, "It's a match!"

One mundane afternoon, as I was chilling on the toilet furiously swiping my life away, I saw what I thought was a mirage – Max! In the four years since she graduated high school, her style had evolved from angsty teenager to grungy-chic hot girl. She had traded Hot Topic for All Saints. Plus, she was still in a band, and she was even on tour! The real deal. I took a deep breath, chanted, "Please be a match, please be a match," and bam, we matched. Now we’re happily married.

Just kidding. It was a disaster and we didn’t even go on a date. Our initial conversation went something like this:

I was looking at your profile, thinking, this chick is so hot, then I realized I know her.

So I guess now would be an appropriate time to tell you I had the biggest crush on you in high school :’)

Well, that was easy and normal! We talked about her music, my writing, how incredibly gay we both are, etc. All my teenage dreams were coming true. We exchanged a few more texts of which I labored over endlessly, sending screenshots to my friends' group chat with questions about how to answer. I agonized over whether to say "lmao" or "haha." I know I write about sex and dating, but that doesn’t mean I’m not an anxious, overly-analytical mess.

Max initially asked me to dinner for that Friday. I booked an eyebrow, nail, and hair appointment, feeling very pleased with myself. That’s when it got weird.

That night, after what I thought was a seamless conversation planning our date, she texted me.

"Want to come over tomorrow for cocktails and Mean Girls?"

I was a little turned off that she changed the original plan of taking me out to dinner but, like, cocktails and Mean Girls is a perfect date.

I frantically calculated if my pubes were long enough for a Brazilian wax.

Then I got another text from her.

"I shaved my whole body! I’m on fleeeeek!"

I thought, you know, that was a little bit weird, but I tried to think of a response. "I guess that means you’re ready for tomorrow," I teased with a tongue face emoji. Then I got no response.

Later, I was awoken at 4 a.m. to my phone buzzing. She sent me lots of texts in a row.

"Sorry I sent that same text to like 12 people."

"I was really drunk."

Then a bunch of question marks and sh*t. Kinda weird. Then she asked if I smoked weed and I was totally over it. I’m a lady. Buy me pasta and wine. Don’t ask me to come over and smoke like we’re in high school. That is not an acceptable date! Especially if it isn’t a sex date!

I hate to put Max on blast like this, but those texts were just straight-up weird. I have anxiety too, and I like drunk texting just as much as the next gal, but, like, I still have social skills.

The next morning, I texted her back, saying it was okay. I didn’t care if we had sex or not, or if her shaved legs were fleeky or un-fleeky — I was just excited to hang with her. Then she straight-up ghosted me. I'll never know what my high school dream of dating Max would be like, but I do know that I have certain requirements from the people I’m dating. One of those requirements is not blowing up my phone, then disappearing.

Two years later, she seems to be thriving: she has a fab job, she's still in the band, and she's engaged to a v cute girl (yes, I still occasionally do some Facebook-stalking). We were both in weird places when we had a chance, and then that chance passed. That’s life.

But matching with her on Tinder taught me a lot. Dreams do come true! (Kind of.) I’ve written before about my intense impostor syndrome and thinking literally everyone is cooler than me. This taught me that the person that I once obsessed over could actually like me too — and is just as real, weird and troubled as I am. I learned that you’ll never know if you don’t try. I also learned sporadic behavior is something I won’t tolerate in the future. And most of all, I confirmed that will always swipe right for rocker chicks.