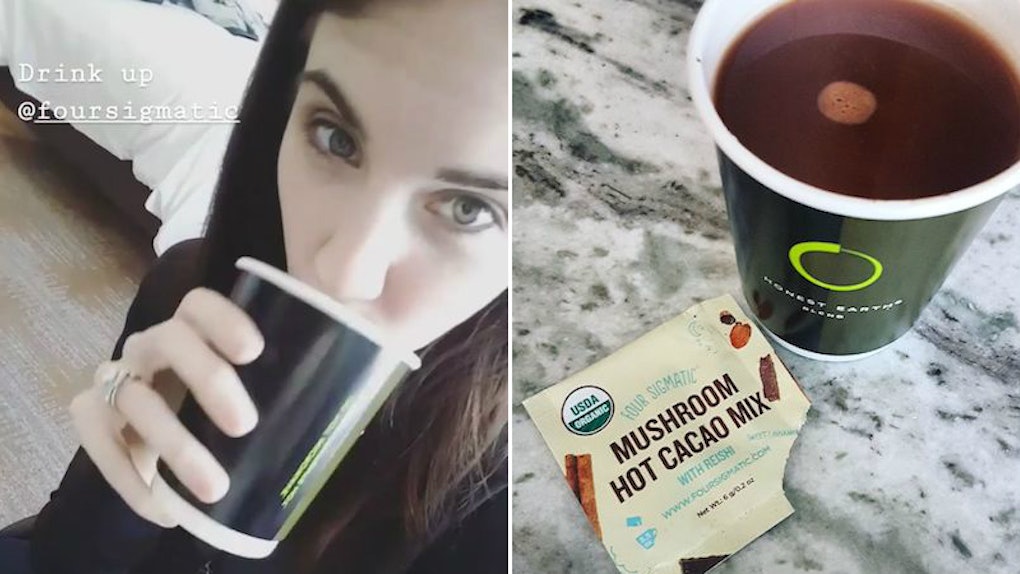 I’ve been keeping a close eye on health and wellness gurus like it’s my job since, well, way before it actually was my job, so I like to think I’m relatively tapped into the latest foodie trends. When superfood-accented everything started popping up on my social feed over the last several months, I made it my business to get on the bandwagon, especially considering the fact that many of these products are advertised as anxiety relievers. Putting the trend to the ultimate test, I drank Four Sigmatic’s Mushroom Hot Cacao to ease anxiety during a hectic few days of travel, when my husband and I flew out to Austin, Texas, for his six-day work conference. I didn’t realize just how much I needed reishi-spiked chocolate therapy in my life until I was sipping on a cup full of this tasty bev.

Let me just clarify something here: I love to travel. I love exploring new places with my husband, spoiling my palate with mouthwatering delicacies from all over the world, taking touristy pictures — the whole nine. This time around, though, we'd just gotten back from Sweden only three weeks prior, and Easter celebrations had taken place smack-dab in the middle of our two trips. Needless to say, I was thrown for a total loop by the time we were preparing to go to Austin.

It was as if I blinked, and it was suddenly the morning of our 11 a.m. flight. Cue a frenzied Julia still trying to figure out the right jacket to wear and what shoes to pack. It sounds like a scene straight out of Home Alone, but I am extremely type-A, and being so chaotically unprepared is very, very unlike me.

Luckily, we made it to Austin without so much as a minor flaw in our travel plans — and yet, I was still pretty anxious after our first night there.

Once we touched down in Austin, I was so relieved that any travel stress I was feeling was put on hold. The reason we were traveling in the first place was for my husband’s work conference, but it was also our first wedding anniversary, so we decided to make a whole weekend out of it. While Saturday night was everything I could have hoped for in our first wedding anniversary, the next day was a whole other story.

I woke up the next morning with a jumble of emotions rattling the cages of my stomach. My husband had received an email from a colleague saying that, unbeknownst to him, there was actually an event he’d have to attend in the middle of our Sunday together, leaving me all by my lonesome. Now, I knew coming into this trip that I’d be spending a lot of time solo, which is perfectly fine, since Monday through Wednesday I’d planned on clocking into my normal work schedule, anyway. I wasn’t prepared to be alone in an entirely new place on a Sunday afternoon, though.

Fortunately, I had a few things to keep me busy, but there was also the anticipation that I’d be meeting said colleague of his at some point. It’s not that I’m not a social person, but I am very much an ambivert. I’m extroverted when I want to be, but also extremely introverted at times, and I tend to feel especially anxious when meeting new people.

In an attempt to easy my anxiety ASAP, I boiled hot water, mixed in Four Sigmatic's Mushroom Hot Cacao powder, and prayed for a miracle.

While I’d definitely consider myself an emotional eater, I’m even more of an emotional drinker, and by that I mean, when the going gets rough, you can bet your bottom dollar I’ll be pouring myself a large mug-full of something hot. My go-to is usually tea, but for the sake of this experiment, I figured I’d try my taste buds (and stress levels) with Four Sigmatic’s adaptogenic hot cacao.

If you’re unfamiliar with the term, adaptogens are herbal, all-natural supplements (usually in powdered or pill form) used to nurse a variety of ailments from insomnia to stress. I’ve experimented with a few different adaptogenic brands, adding Moon Juice’s adaptogenic protein powder to smoothies, and drinking a pretty glass of moon milk with turmeric and ashwagandha powder to make me sleepy. But Four Sigmatic was one item on my list I’d yet to check off, and this was the perfect opportunity to not only see if the brand lived up to the hype, but if the combination of reishi and cacao could put me at ease. The product description promises stress reduction and restful sleep, so I was hopeful for some good results.

Before taking my first sip, however, I wanted to make sure these key ingredients could actually help my anxiety.

According to Dr. Josh Axe, D.N.M., C.N.S., D.C., founder of Ancient Nutrition and DrAxe.com, cacao is excellent for mood-boosting effects. It stimulates your body's production of something called anandamide, which leads to “induced feelings of bliss,” he tells me in an interview with Elite Daily, while the polyphenols in cacao “may also have a mood-boosting effect, and can help increase feelings of calmness.” Plus, cacao's essentially just the healthiest version of chocolate. If nothing else, the piping hot formula I was about to consume would, presumably, taste pretty good.

Reishi, on the other hand, I was unfamiliar with. The buzz-worthy ingredient is an herbal mushroom that, according to Reishi.com, is commonly known as Ling Zhi in Chinese, and has been used for its incredible immunity benefits for years.

In terms of its stress-relieving qualities, Tero Isokauppila, president and founder of Four Sigmatic, tells me in an interview with Elite Daily that reishi, as well as other mushrooms, are "anti-viral, antibacterial and adaptogenic," and it's that adaptogenic nature that can reduce bouts of stress. These mushrooms do this, Dr. Axe explains, by "blocking the secretion of histamine," which, in layman's terms, basically means the mushroom stops chemicals in your body from flaring up anxiety symptoms and feelings of stress. This all sounded pretty good to me, so I poured a cup, pinkied up, and sipped until I'd drank it all down.

It turns out, the superfood hot chocolate did dial down my anxiety levels — and yes, it tasted pretty excellent, too.

I am thrilled to report Four Sigmatic does, in my opinion, live up to the hype it’s garnered on social media. While I wouldn’t go as far as to say each sip was identical to a Dunkin' Donuts hot chocolate, I’d consider it one of the healthiest versions of the stuff that you could drink.

You really can’t taste the mushroom at all, which is definitely something I was hesitant about going into my first sip. And, unlike a lot of flavored teas I’ve tried that taste fantastic hot, but disgusting cold, I actually found that the mushroom hot cacao mix tasted even better as it cooled. This time around, since I was stuck in a hotel room, I was limited in culinary resources, but if I were to make it again at home, I'd swap hot water for steaming almond milk instead to see how it would influence the taste.

As for my anxiety levels, I wouldn’t describe the effects as an instant change in the way I felt. It was more like a slow, gentle ease; the more I drank, the better I felt. I leisurely sipped on my hot cacao for about a half hour or so, writing emails and listening to slow jams by Kina Grannis in the process. It could be that the combination of Grannis’ soothing vocals, the distraction provided by my busywork, and the adaptogenic benefits of reishi mixed in with cacao, all worked together to lower my anxiety levels. Either way, though, I definitely wouldn’t hesitate to grab a sachet of Four Sigmatic’s powder mix when I’m feeling super stressed in the future.

More like this
The TikTok Recipe You Should Try, Based On Your Zodiac Sign
By Chelsea Jackson
The Trendiest TikTok Recipes Of All Time That You'll Want To Taste With Your Buds
By Kelly Pau
12 Best Mother's Day Brunch Delivery Gifts That Mom Will Love A Waffle Lot
By Rachel Chapman
Stay up to date