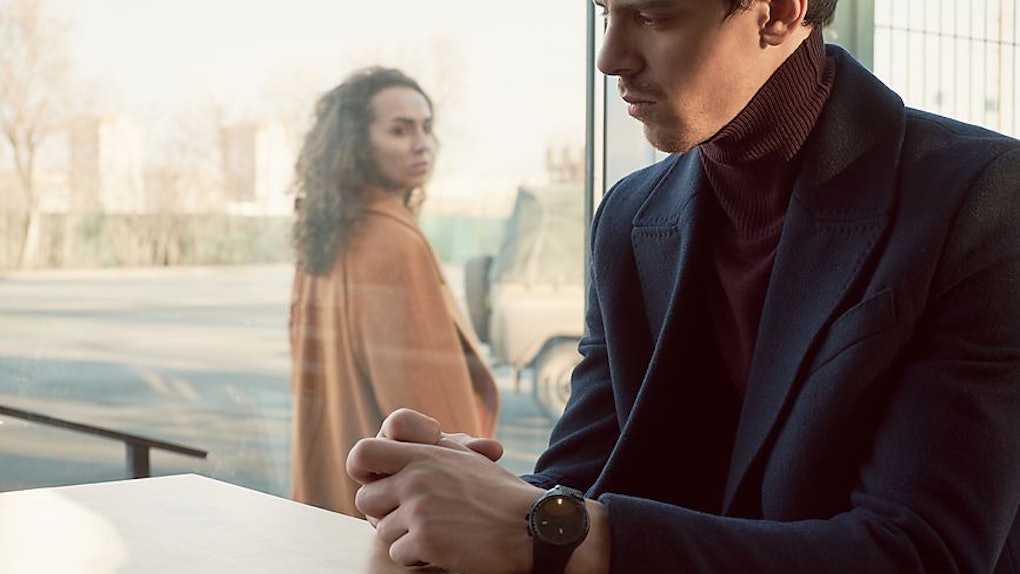 My dating life thus far has been... sticky. And complicated. And, like many women, filled with moments that leave me thinking, "But what went wrong on our date? Why don't boys like me?"

My first-ever boyfriend cheated on me with one of my closest friends, which had me obsessively asking myself (and anyone who would listen) what I'd done to drive him away. My next ex and I broke up on pretty amicable terms, but then completely fell out of each other's lives a few months later, which left me wondering why he didn't want to have anything to do with me. And then, throughout college and my post-grad career, I've been on about a million and one dates with guys I thought I really connected with, only to be ghosted or turned down days later.

But as my personality has evolved and my behaviors have shifted, answering that classic "what went wrong?" question has become increasingly complicated. For years, I was convinced that my "no drinking, no cursing, yes to dresses with bows" lifestyle was a turn-off — guys wanted a "bad girl," and that definitely was not me. But even when I developed a taste for gin and tonics and rule-breaking, I seemed to run into the same kinds of dating conundrums.

Like so many people, I was convinced that there was a rigid dichotomy between "good" and "bad" girls — guys preferred one over the other, and neither could exist on a sliding scale. Of course, no matter how you define these titles, they're both marked by insanely unrealistic and narrow expectations. And by throwing women into buckets like good or bad, innocent or promiscuous, we're just setting ourselves up for failure. No one is ever completely one thing, and qualities like virtue and rebellion aren't mutually exclusive. But the more time I spent reflecting on my own dating history, the more I realized that guys must have been dropping me into these exact buckets, and writing me off as a result.

So, I decided to ask some of the fellows I've dated — from long-term exes to guys I only saw a few times — what went wrong, and the answers were crazy interesting. But here, I'll let the guys explain it.

Like all great teenage romances, Joey* and I met while working at a frozen yogurt shop. I was a shift manager at the time, and my no-nonsense management style and his very laid-back attitude had us at odds from the start. But with time, we both loosened up a little and became an item a few months after meeting. (OK, we became an item like a year later because I acted very Zooey Deschanel in 500 Days of Summer and refused to call him my boyfriend at first. Teenagers, am I right?)

Labels or not, we were together for the better part of two years, during which time I baked cupcakes weekly, wore A-line dresses daily, and had exactly one alcoholic beverage (that I guiltily sobbed about for like an hour). Near the end of our relationship, we'd started fighting a ton about whether or not it was cool for him to spend weekends chugging vodka with strangers (at the time, I definitely didn't think it was). We eventually broke up for a variety of reasons, including the facts that Joey loved the house party culture I despised, and that I was transferring to another college.

Things ended amicably, and we stayed in touch post-break-up, but about a year later, Joey kind of vanished. He stopped following me on every form of social media, his tags and comments on all of my photos had disappeared, and our occasional texts back and forth had ceased.

Why did he suddenly hate me so much?

I finally got the answer last week, when I reached out to get some brutally honest feedback about what dating me was like during my so-called "good girl" days. Funnily enough, it turned out that he didn't hate me. He'd had to make new accounts for professional reasons, and apparently thought I hated him.

I always felt like I had to be on my best behavior around you, but eventually, that was just the way I was.

All he really said was, "I mean, everyone's a little judgmental, I think... I always felt like I had to be on my best behavior around you, but eventually, that was just the way I was."

I had worried that he felt I had judged him during and after our breakup, and that's why he had created distance between us. But I guess that wasn't the case after all — at least, not as much as I'd thought.

Now, in the five years between breaking up with Joey and meeting a fellow American named Peter* in Paris, I'd basically undergone a full Sandra Dee to leather pants-wearing Sandy transformation. I mean, Pottermore placed me in Slytherin instead of Gryffindor... and I'd always been in Gryffindor, you guys.

I like to say that New York corrupted me (I spent nearly two years living and working in the city after graduation), but regardless of the cause, I was cursing and drinking like a sailor by the time I met Peter.

And I was in rare freaking form on our first date.

Like, I rolled up an hour late with a half-drunk bottle of wine in my bag and low-key forced him to chug it while I tried to hop the fence around Sacré-Cœur. And he still went out with me a few more times. Before Peter headed back to the States, we even met up in London, and I spent the entire weekend drunk and jet-lagged (a terrible combination, by the way).

When I asked Peter for dating feedback, he said he didn't think he could be "brutally honest" with me, but I remembered there being a few things he didn't love while we were together.

I mean, you did force me to chug rosé on the street... But I thoroughly enjoyed it.

Like, um, I may have aggressively tried to set him up with my friend Christina. They live in the same city and would be perfect together. Perfect, I tell you! I remember him saying things like, "Are you seriously trying to set me up on a date while we're on a date?" and "Why do you keep bringing your friend up in my bed?" Whoops!

I think the problem was, in trying to seem mysterious and chill, I came across as insultingly uninterested. TBH, I was hardcore interested. But Peter lives in New York, and I live in London, and the easiest way for me to keep myself from catching feelings was apparently pimping my friends out. While nothing really went wrong on our dates, I'd say they didn't exactly go right.

Just last month, Jake* and I went on a couple of dates in London and had a pretty good time, but then I never really heard from him again. So I texted him to find out what went wrong.

I don't trust myself to read signals correctly... I feel like we got on and enjoyed each other's company, but we were both kind of second-guessing each other all the time.

He was right — we were second-guessing each other a whole lot. I was thrown off when he'd asked if I could handle another pint of beer, and he seemed confused when I didn't want to hold hands and cuddle up in a booth (or, you know, when I responded to that pint comment with "The f*ck? Of course I can."). He'd also mentioned that he felt pressured to drink a lot on our date, which just bummed me out in general.

Once again, I was trying so hard to play that nonchalant, bad-girl role that I'd come off as completely uninterested, even though I was definitely into Jake (did I mention he had a British accent?).

It's just... there's so much pressure to be one thing, right? So much pushing us to be cool without seeming apathetic. To be provocative without acting promiscuous. To be ladylike and still fulfill guys' sexual fantasies. And, in my failed attempts to balance all of that, I've just ended up looking aggressive and uncaring. I don't know whether to blame '80s rom-coms or the patriarchy or both, but I'm over it.

So, heading into the new year, my goal is to stop being what guys want. It's an impossible task, anyway. I'm not chill or cool, nor do I need to fulfill anyone's fantasies but my own. I'm caring, and sometimes forward, and often crass, and I'm just going to own that. New year, same old me — the real me this time.