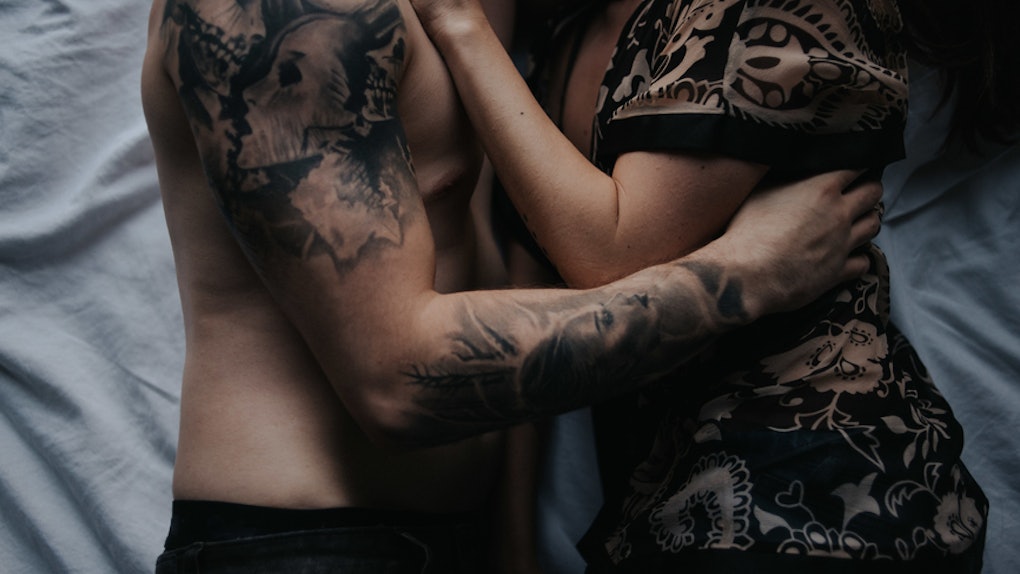 Long before the written word was a thing, body language was one of the primary forms of communication between pre-historic baes. Figuring out how to tell if your partner loves you solely based on physical cues might sound a bit far out — but it actually isn't.

Just think about the times we've all seen those couples that can't seem to keep their hands off of each other. If you're in a relationship, it can be totally cute, but if you're single it can be pretty nauseating. Spotting two people who are in love from the outside isn't so difficult.

This is not to say that we are all the same when it comes to how each of us shows love, but for many people, physical affection and love are intrinsically linked. According to the best-selling book The 5 Love Languages by Gary Chapman, there are five main ways that people give and receive love: with words (i.e., I love you), with acts of service (i.e., running errands), by receiving tokens (i.e., gifts, romantic gestures), by spending quality time together, and last but certainly not least, through physical touch.

When talking about the connection between body language and love, it's important to also remember that everyone's love profile is slightly different —thus, there are certain cultural and conditioned reasons why we all love the way we do. Here are some ways to tell if your partner loves you.

1. They Touch You Softly And Pull You Close

According to author and relationship expert Alexis Nicole White, someone who's in love — particularly men — will most likely spend plenty of time caressing you softly, sometimes even in a non-sexual way. Chances are when you are having an intimate moment, they will also try to pull you as close as possible.

This need for physical closeness often parallels the emotional closeness that they're feeling, which is a pretty big part of being in love.

2. They've Learned To Touch You How You Like To Be Touched

It can be all too easy to get caught up in the storybook ideas of romance, which tells us that our "true love" should essentially be able to read our minds and and anticipate our every need. Any one whose ever been in a relationship knows that oftentimes, this is far from the truth.

Just because someone might not instinctually know how you like to be touched doesn't mean that they don't love you.

According to Three Day Rule Matchmaker Michal Naisteter, the most important thing is that your partner takes the time to figure out exactly how you like to be touch if you aren't automatically in sync: "A person who’s in love will touch their partner in a way that feels good to their beau – by listening to what they like and watching their response. If you are in love, that feedback cycle with your partner and their response is what will show their investment in you and your pleasure."

3. They Caress You With Their Eyes

Naisteter also says that how they use their eyes — also difficult to interpret as love without taking into account other factors — can also mean that they are emotionally invested. "A good sign of a passionate couple is prolonged eye-gazing, an activity that activates a dopamine release from your brain," explains Naisteter.

Having doubts about whether or not your partner loves you based on their body-language alone? Don't panic. Both Naisteter and White say that just because your partner isn't touching you in a certain way doesn't mean that they don't love you.

"A partner who is not physical is not always a sign that love is not there. There are many instances of people who fall in love online which demonstrates the power of emotional connection and communication in love," says Naisteter.

Remember the five love languages I mentioned earlier? It's very possible that the person you're with simply doesn't speak the same love language as you. This is where the importance of communication comes in. If, for whatever reason, you're not feeling the love either because of a lack of sufficient physical affection or any other reason, then making that known in a clear and non-hurtful way is key.

In the end, how someone touches you and what it means varies from person to person. As long as your partner respects you and meets your needs, then there is no reason to measure your relationship against anything other then your own contentment.