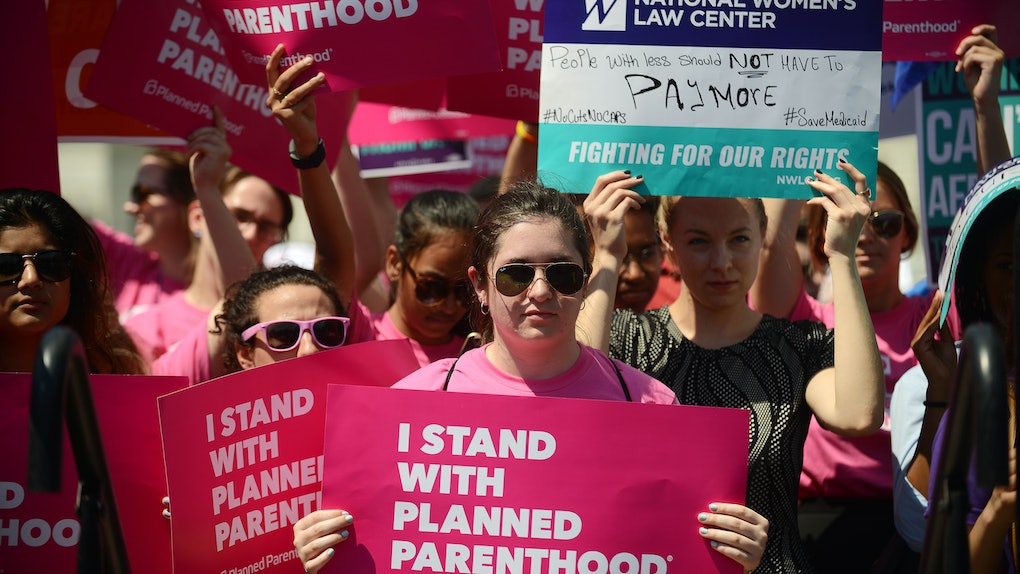 How To Submit Comments On Trump's Birth Control Rule, Because Time Is Running Out

In early October, the Department of Health and Human Services (HHS) announced interim rules allowing employers to refuse to cover contraceptive care for their employees. Tuesday, Dec. 5 is the last day of the public comment period before the changes become finalized. Time is running out, but you can still submit comments on Trump's birth control rule. Here's what to know.

The HHS's interim rules undid an important provision of the Affordable Care Act (ACA), otherwise known as Obamacare, that required employers to provide contraceptive care for their employees under their health insurance. The change exempts employers from this responsibility given they have a moral or religious objection to birth control. But the key word to all this is interim. The changes took effect right away, but it's not too late to tell the administration what you think.

I spoke with Chelsea Vargas of Iowa and Yulisa Vega of Florida, both patient advocates for Planned Parenthood who have their own personal stakes for the change. Vargas and Vega made the journey to show up at the HHS doors in Washington D.C. on Tuesday as part of a demonstration by a number of advocacy groups, where they presented the loads of public comments citizens nationwide have submitted on the rules.

Why is birth control coverage so important?

According to Planned Parenthood, more than 62 million women have gained contraception thanks to the ACA. Obamacare has allowed women who otherwise couldn't afford it to receive copay-free access to birth control.

"Birth control is not necessarily something that’s available out of pocket for everyone, and it shouldn’t be your employer’s choice whether you have access to birth control or not," Vega says.

Vargas had been receiving birth control from Planned Parenthood until her state's program was defunded. She was left with two weeks to find another method, she says, and was faced with a bill of upwards of $150 to continue using her method, even with a sliding scale.

"I was able to get the implant, but it put me in a really scary position," Vargas says. That's why she came out to protest. "I’m coming from a place of knowing how scary it can be. A lot of people are not going to be as lucky as me."

And contraceptive methods aren't just a pregnancy thing. Many people use birth control to manage other health conditions, such as acne, chronic menstrual pain, and endometriosis. So the change didn't just affect those who are sexually active, but anyone who needs these doctor-prescribed medication for medical reasons. Vega is one of them.

"I take birth control for medical reasons," Vega says, explaining they don't use it for pregnancy prevention. "As a student, right now is not the time for me to be having children. And it’s unfair that I might get that choice stripped from me, because I now have to rely on other forms that aren’t the best option for me." They were motivated to show up at the HHS on behalf of others like them, who are in jeopardy of losing their medication.

A coalition of educational advocacy groups, including the Center for American Progress, also co-signed a letter to the HHS explaining why the changes would hurt women academically. "[A]ccess to free contraception can mean the difference between completing high school and college and not," the letter read.

If you're shaking with rage as you read this and want to take action while you still can, here are a few quick and easy ways to flex your activist muscle before the deadline expires.

Write to the HHS.

Go directly to the source by submitting your comments to the department.

PRO TIP: Because the rules affect both "religious" and "moral exemptions," there are two separate issues on which to comment — here and here.

Many advocacy groups have automated letters you can send to make your voice heard. Check out these ones from Human Rights Watch, Planned Parenthood, and Keep Birth Control Copay Free.

FUN FACT: You can also send Trump your birth control invoice if you want to really stick it to the man.

The more the merrier, right? If you want to garner a larger response, start with your own circle. Peer pressure your friends to join the cause on social media (no, it's not just for women!) using the hashtag #HandsOffMyBC. Make your post super inspirational by explaining why birth control is an important cause for you, why it's important for women in general, or why you're choosing to make your voice heard. Even if you don't win over any converts, at the very least, you'll probably educate some people on your feed about the nuances and implications of policy on women's reproductive rights.

Feeling helplessly alone? It might give you comfort to know that thousands of people have submitted comments. According to Planned Parenthood, 250,000 of their supporters have voiced their opinion, and a tweet by the Center for Reproductive Rights suggests half a million people submitted comments. The official government comment pages have received 38,000 and 37,000 comments respectively.

(Side note: If birth control is something you care about, it's worth noting that this decision is separate from provisions in the tax reform bills that are now working their way through Congress that would jeopardize healthcare for millions of people — further putting women's reproductive coverage at risk.)

Vargas was inspired by the turnout and citizens making their voices heard — a crucial component for change. But it's not enough. "[U]ltimately we need the people at HHS and the Trump administration to have this better understanding," she says. "What’s going to come next? Are citizens like us going to be heard or are [Trump and the HHS] going to do what’s in their own best interest?"