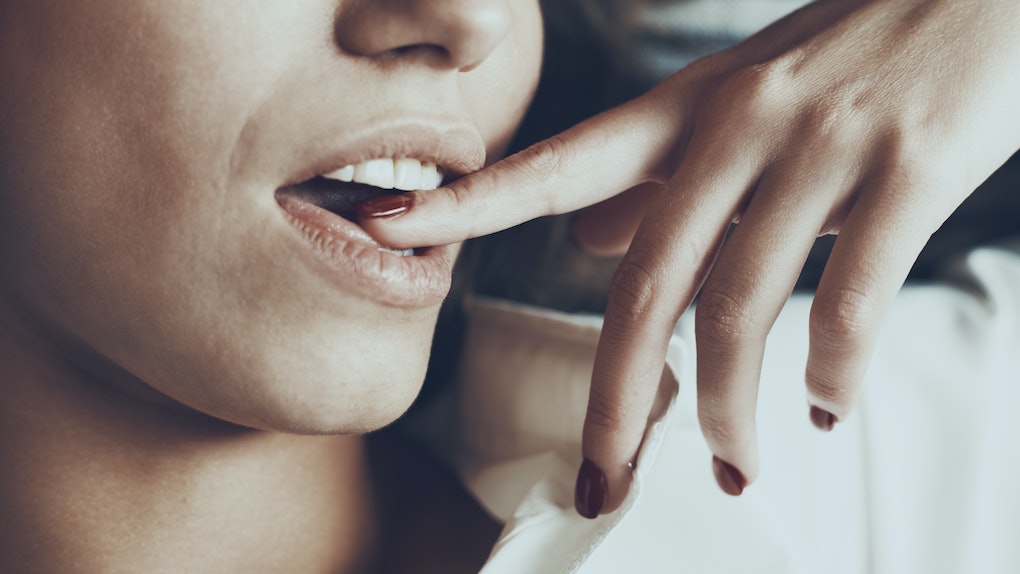 Orgasms are awesome. I know, what a controversial statement. Waves of pleasure followed by a sense of relaxation and contentment is practically the definition of amazing. But have you ever wondered if it's possible to orgasm without sex? “Very [possible]!,” Lola Jean, sex educator and mental health professional, tells Elite Daily. “Our bodies are very smart in that if we trust them and let them run on autopilot they can amaze us.”

Back in Sex Ed, you might have learned about men having wet dreams, but did you know that women can also orgasm in their sleep? This occurs during the REM cycle where your mind is at its most active. According to Women’s Health Magazine, during REM (rapid eye movement, a portion of your sleep cycle), your body "experiences autonomic fluctuations." In other words, the blood flows throughout different parts of your body — including your genitals. In men, this translates to erections, but in women, it can cause clitoral engorgement.

“The brain is definitely a powerful sex organ,” sex expert and Good For Her founder Carlyle Jansen tells Elite Daily. “We often wake up from intense dreams with the sense that we had just been experiencing what happened in the dream. If that is so, then why would we also not have intense sexual experiences that feel real as well?”

Need some inspiration to hit the gym today? What if I said you may experience a "coregasm"? It may sound like a new workout fad, but it’s actually an exercise-induced orgasm. “Exercises that engage both more core work as well as activating the pelvic floor are not only beneficial for controlling your pleasure and stamina in certain sexual movement but can sometimes result in orgasm,” explains Jean. “Leg raises or leg lifts where your back is pressed against a surface and your arms are parallel to the ground using your core to lift your lefts to your chest or straight up perpendicular to your core is a popular one,” she says.

3. Just By Thinking About It

Some women (including Lady Gaga) report that they're able to think themselves to orgasm. Does that sound like a pipe dream? Well, there is some science to back it up. Dr. Barry Komisaruk, co-author of The Science Of Orgasm, told the Daily Mail, "The pleasure centers of the brain associated with orgasm light up in women who think themselves to orgasm in exactly the same way as in women who orgasm through more conventional means."

I don’t think I could come up with a scenario less sexy than childbirth, but, as it turns out, labor and orgasms can go hand in… well… you know what I mean. It’s called "orgasmic birth," and Dr. Christiane Northrup, a board-certified OB-GYN, explained to ABC News how it works:

When the baby's coming down the birth canal, remember, it's going through the exact same positions as something going in, the penis going into the vagina, to cause an orgasm.... Labor itself is associated with a huge hormonal change in the body, way more prolactin, way more oxytocin, way more beta-endorphins — these are the molecules of ecstasy.

And here you thought orgasms were just for baby-making.

If you’ve ever taken a yoga class, you know there are two things that happen a lot during one: Deep breathing and flexing of the pelvic floor. So, honestly, I don't know why the idea that you may come while in the lotus pose should be any big surprise.

One of the objectives of yoga is to increase strength in the formula bandha, aka the muscles around the genitals. If you practice yoga, you know you sometimes breathe deeply while doing the equivalent of kegel exercises. In addition to this, sexologist Dr. Jeffre TallTrees told The Daily Beast, "When women engage their PC [pubococcygeus] muscles, the tissue around the g-spot swells, which can lead to climax." Talk about hot yoga.

Belly button-gasms are an actual thing. According to Men’s Health, the explanation of this phenomenon is that stimulation of the belly button can hit the vagus nerve, which is "a branchlike structure" that actually connects the cervix and the brain by way of the belly.

While belly button orgasms may sound outlandish, there is actual science to back this up, says Jean. “[There was] a super interesting study done [by The Department of Psychology at Rutgers] on people with vulvas who were paralyzed from the waist down. Even though they had no feeling in their vulva or vaginal area, when the vagus nerve was stimulated they had orgasms. This is due to the vagus nerve ending within the cervix, which is where that stimulation resulted. The vagus nerves runs from the back of our brain stem down our body and ends within the cervix. The vagus nerve is the onset of the nervous system and most extensive distribution of the cranial nerves,” explains Jean. “This is also why many may describe this type of orgasm as a full body orgasm given the extent of the vagus nerve.”

So, in other words, dreamgasms, coregasms, braingasms, birthgasms, yogasms, and even navelgasms exist. “We have multiple pathways to pleasure and ways to arouse or please ourselves beyond the simple few we may be used to,” confirms Jean. “The key is exploration and, you guessed it, patience.