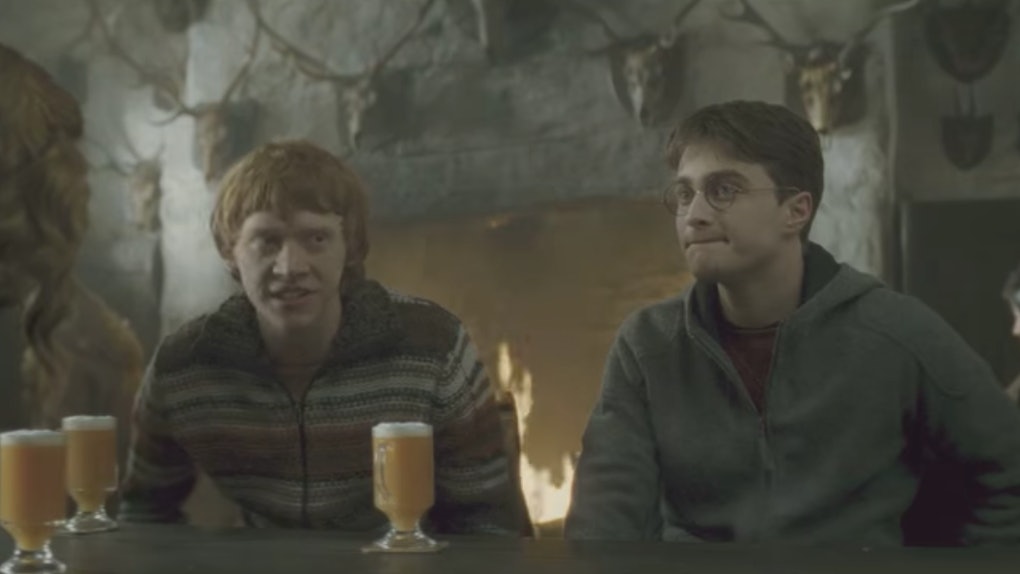 While hella brave Gryffindors, clever AF Raven Claws, super loyal Hufflepuffs, and cunningly devious Slytherins have their mystical differences, it's safe to say that all of the houses can probably unite as mutual fans of undeniably delicious Starbucks drinks. And if you Potterheads are just so sick and tired of pretending that drinking tea in your house is the real-life version of the Hog's Head Inn, gather some of that good old floo powder or ride that broomstick straight to your closest Starbucks, and order a Butterbeer Frappuccino off of their secret menu.

Maybe you can't make it to Hogsmeade this weekend because you really need to study for those pesky OWLs. Or maybe you have to look after Dobby, because that wily house elf has been causing endless amounts of trouble around the neighborhood (again). Nevertheless, your soul is likely hankering for a mug of that tasty-as-heck Butterbeer, and you absolutely need to get out of the gosh darn house. The solution? Take your OWL study guides to Starbucks and bring Dobby along — because Starbucks' Butterbeer Frappuccino sounds too magical to pass up.

Ordering a Butterbeer Frappuccino off Starbucks' secret menu is easy as flying (with absolutely no wand necessary). According to The Independent, you should ask your Starbucks barista for for a Grande Creme Frappuccino, blended with three pumps of caramel syrup and three pumps of their (freaking marvelous) toffee nut syrup. For some extraordinary pizzaz, make sure to request an additional pump of cinnamon dolce syrup, along with a sprinkle of cinnamon on top.

If you've just finished a breezy game of Quidditch, and if you're a little more in the mood for a relaxing warm mug of Butterbeer, The Independent recommends ordering a Butterbeer latte, instead. For the Butterbeer latte, Potterheads are strongly advised to order a whole milk steamer, complete with two shots of espresso, two shots of caramel syrup, three shots of toffee nut syrup, and finally, three shots of cinnamon dolce syrup. They also recommend asking for a dollop of whipped cream and caramel crumbs on top to complete the magical beverage. So don't be a muggle, and definitely go all out, because Starbucks' Butterbeer drinks are a totally worth it.

Another Starbucks drink, which Hogwarts alum also claimed to bring back the glory days, was the Smoked Butterscotch Latte. Between some of that good old espresso, steamed milk, smoked butterscotch sauce, and a smidge of smoky butterscotch sugar on top, Potterheads were totally caffeinated and accio-feeling themselves, just as they did back while wandering the day away through Diagon Alley. Unfortunately, it was a limited time beverage, and it's no longer available, so the latest Butterbeer Frappuccino and latte recipes will just have to do.

So if you need a little boost after training all day to win the Goblet of Fire, or if you're craving a little extra umph before asking Cho Chang to accompany you to the Yule Ball, definitely park your broom outside your local Starbucks and grab a Butterbeer Frapp or latte. There's honestly nothing better than a little sugar and a lot of nostalgia from The Three Broomsticks Inn. Because if we're being honest, all of our favorite memories from the good old days at Hogwarts were from when we were all scheming and plotting against Draco Malfoy over a sweet round of Butterbeers.

More like this
Here’s How To Order A ‘Princess & The Frog’ Tiana Frappuccino At Starbucks For A Unique Combo
By Lara Walsh
Here's Where To Buy Naturdays Pineapple Lemonade Beer To Unleash Your Summer Vibes
By Cianna Garrison
How Long Is Pepsi Blue Available? Don't Wait To Sip The Colorful Cola
By Cianna Garrison
Stay up to date