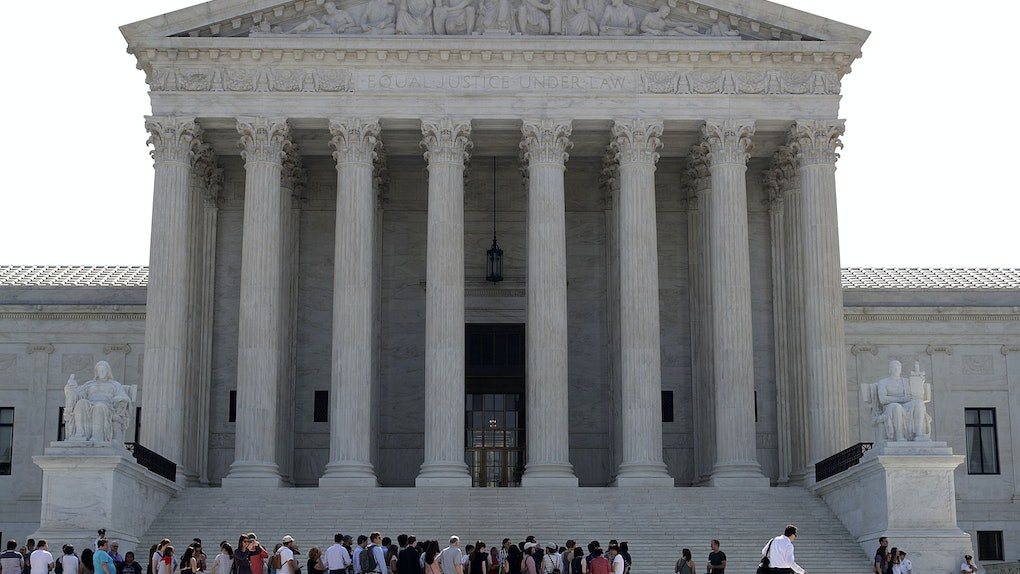 How To Donate For Women's Health After NIFLA v. Becerra, Because You Can't Do Nothing

The most recent news out of the nation's highest court is pretty sad news for pro-choice advocates. On Tuesday, June 26, the Supreme Court ruled in NIFLA v. Becerra that California can't make crisis pregnancy centers (CPCs) provide information about public programs that provide family planning and abortion services, arguing that it was a violation of the centers' free speech. It's a definite blow for women's health care, and now that the decision has been made, you might be wondering how to donate for women's health after NIFLA v. Becerra. Here's everything you need to know.

The ruling in National Institute of Family and Life Advocates v. Xavier Becerra came in a 5-4 vote, with the majority saying a 2015 law that required licensed medical providers to share info about available services with pregnant women "likely violates" the First Amendment. Additionally, the majority said the requirement for unlicensed providers, including CPCs, "unduly burdens protected speech," largely because many have religious missions and the act would conflict with their beliefs, per Newsweek. Considering the mission of CPCs is generally to dissuade pregnant women from having an abortion, the ruling has only confused and frustrated many onlookers.

Even so, the decision is the latest update in the long-simmering battle between pro-life and pro-choice advocates and could be indicative of what's to come from the Supreme Court as related to the future of women's reproductive health. In the meantime, if you're frustrated at this ruling, you can still help by donating to organizations fighting for reproductive rights and advocating for sexual health education. Check out these six, and rest assured that this fight is far from over.

The Center for Reproductive Rights (CRR)

One organization to choose from is the Center for Reproductive Rights, a nonprofit organization that has advocated for reproductive rights around the world since its establishment in 1992. Some of the CRR's issues include protecting and expanding access to abortion and contraception, as well as funding and prenatal services for a healthy pregnancy.

You can help them on their journey by donating here.

The Reproductive Health Access Project (RHAP) is exactly what it sounds like: a nonprofit organization dedicated to working with clinicians to help the integrate abortion, birth control, and miscarriage treatment into their practices, so people can get essential information from their primary care providers — rather than being left in the dark or blindsided.

The Planned Parenthood Federation of America (PPFA)'s mission is focused on educating people about health care options, as well as leading the push for de-stigmatizing reproductive health care. According to the PPFA website,

Or if you want your money specifically to go to legal advocacy, there's also Planned Parenthood's separate advocacy and political division, Planned Parenthood Action Fund (PPAF), which works to educate the public, inform and mobilize voters, and promote policies that allow people to access health care.

With the latest ruling, the need for great advocacy and policy organizations is greater than ever, so you should definitely consider donating to PPFA here or PPAF here.

According to the National Abortion Federation (NAF)'s website, this professional association for abortion providers "[represents] the providers who make reproductive choice a reality." Some of its services include providing resources for those who are in search of abortion care, as well as educational programs for healthcare providers. The NAF also protects patients and providers from anti-abortion violence. Considering CPCs are known for misleading their patients to fulfill their anti-abortion agendas, you might wanna check them out.

Make a donation here to help the NAF continue fighting for its cause.

According to its website, the National Latina Institute for Reproductive Health (NLIRH) is "the only national reproductive justice organization dedicated to advancing health, dignity, and justice for the 26 million Latinas, their families, and communities in the United States."

They'll take all the help they can get, so head on over to its website and donate.

The National Network of Abortion Funds (NNAF) is run by volunteers who, through the program, literally give money to people around the country in need of abortions and help pay for associated costs caused by restrictive laws and economic barriers. Instead of trying to talk a person out of their decision to get an abortion, they're so down for the cause that they even offer rides to those who don't have any other way to get to their appointments.

Whatever you decide to give will definitely be appreciated, and you'll surely feel great knowing that your coins are going to such an important cause.