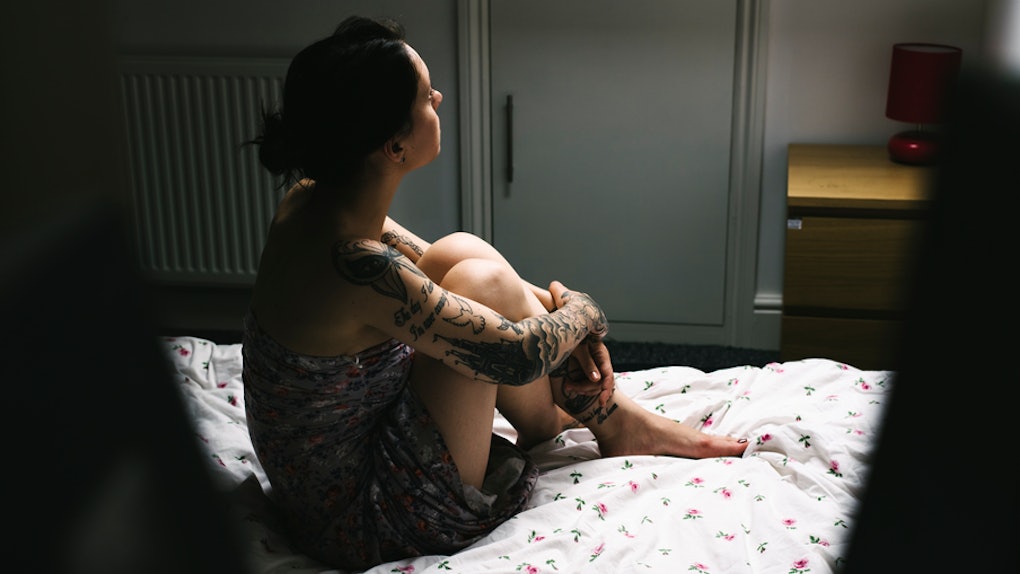 How To Deal With Gaslighting In A Relationship, According To People Who've Been There

There's this not-so-funny stereotype in our society that women are insane (or too emotional, too reactive, too sensitive... the list goes on). Many of the guys I have dated have almost used the terms "female" and "crazy" synonymously. Yeah, not cool. What I didn't know, though, is that there's a term for a variation of this behavior: gaslighting. It turns out, a lot of us have been subject to this kind of manipulative behavior at the hands of romantic partners. Not many of us, however, know how to deal with gaslighting in a relationship.

For those like me, who hadn't heard of it, gaslighting occurs when one person in a couple lessens the other's credibility and makes them question their logic/sanity by calling them crazy or insane. According to YouGov, this has happened to "a third of females and 24% of males" during an argument with a romantic partner. That seems pretty commonplace for something so devious. So what gives, and how do we put an end to it?

In a recent Reddit thread, people shared their advice for how to deal with gaslighting in a relationship, because they've dealt with it themselves. Remember, while it might be hard to see past a toxic scenario, there are ways to set yourself free.

Try To See The Puzzle Pieces Behind The Full Picture

It's hard to really describe as an overview because gaslighting is something that builds up over time from tiny instances.

When I got with my ex, I mentioned that I didn't like driving. I didn't have my own car and when I moved in, there was only his SUV, which I was definitely not comfortable driving.

But over time this turned into I wasn't allowed to drive. Keep in mind, this is after three years of living together and planning to get married and have kids.

Don't Try To Be Friends

Just getting out of this type of relationship with an ex that I remained friends with. What a huge mistake. Break clean boys and girls, break clean.

I finally got out of that relationship. In the last month of the relationship I started talking to someone I met online (but lived in my town). I started to really like him, and he treated me like a human being. Yes, I emotionally cheated on my boyfriend, and I am not proud of it. I ended up gaining the strength to end the relationship, and started dating the other guy. He treated me like I deserved to be treated, and he made me learn so much about what I should look for in a partner. We aren't together anymore due to some logistical stuff (me being away at school), but we talk every day and are great friends. He will always have a very special place in my heart for showing me exactly what I needed to see in order to respect myself and get out of that terrible relationship.

Once he realized he didn't have total control over me he finally left me alone.

Use It As A Learning Experience

It's going to take time. It took me quite a few months. But thankfully the relationship after made me realize I was codependent and that I could have a much better relationship. I consider myself lucky. Some people never break the cycle.

In the beginning, it's almost like muscle memory to put yourself in a situation even if the new person is completely different. It just helps to remember that that part of your life is over and hopefully you'd recognize the signs of another gaslighter. NOW, they are blatantly obvious to me. NOW they are. At the time... OBLIVIOUS.

Worst part was that EVERYONE else in my life knew what was going on but I was blinded.

I've realized that love is not undermining eachother. I haven't had that sort of love but I've seen it action in others, and it's beautiful. These people who have to treat their SO like the SO is less, makes the abuser feel powerful and in control. Love is about working together, making compromises that are not one sided. I wish you so much courage and strength!!!

When You Realize Someone Is A Gaslighter, Avoid Them

Avoid these people and save yourself some time.

As soon as I made more friends and got into therapy, I stopped second-guessing myself and got out of that relationship.

A lot of the time, when we think about abuse, we assume it is physical. However, if someone is emotionally abusing you, it is important to address it with the same level of seriousness. A person who tries to break you or undermine you is not a healthy partner.