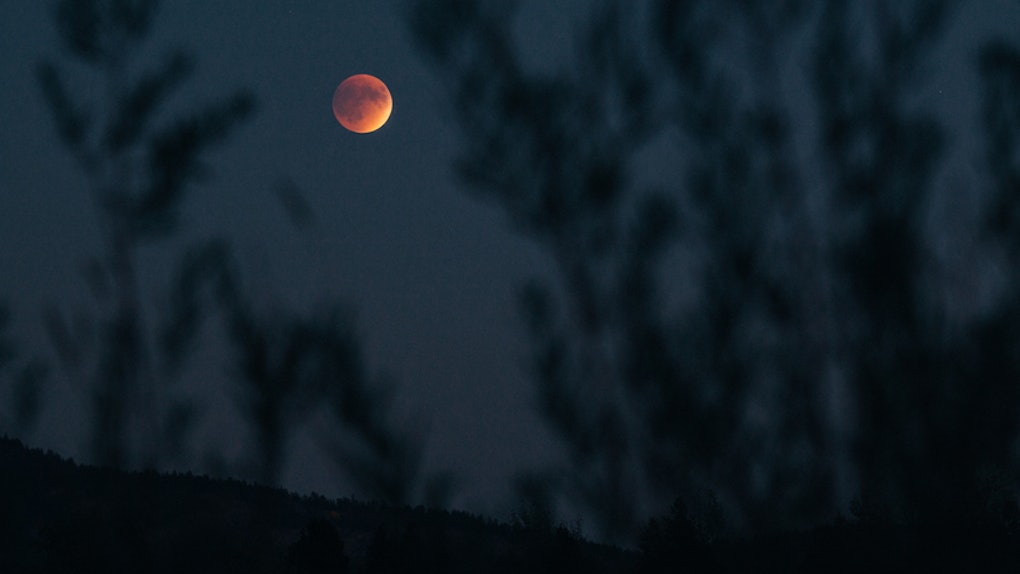 For generations, people have theorized about how the 28-day cycle of the moon can sync up with and even drastically affect a woman's own 28-day menstrual cycle. And TBH, I've always been low-key curious about whether or not my period actually syncs up with the full moon, as this speculation suggests. If you're like me, and you're super intrigued by the whole moon-menses link, especially with the rare lunar eclipse coming up on Jan. 31, you might be wondering how the super blue blood moon affects your period.

First things first, you might be thinking, "WTF is a super blue blood moon?" Relax y'all, it's not as complex as it sounds, I promise. The fancy name for the upcoming lunar event simply means that the moon is going to be very close to the Earth (aka "supermoon"), it's going to be the second full moon of the month (that's what the "blue" part means), and the moon is going to have a reddish hue to it (aka "blood" moon). Intricate titles aside, it'll be a truly breathtaking sight to see.

Anyway, now that you know exactly what's going to be taking place in the sky on Jan. 31, let's get down to how it's going to affect Auntie Flo's monthly visit, shall we?

While there's no scientific hard evidence to back up many of these claims, many people speculate that the gravitational pull of the moon can cause a whole host of side effects for your menstrual cycle. Some sources have reported more regularity in previously irregular periods, less painful PMS symptoms, and increased creativity leading up to that time of the month when a full moon is high in the sky.

But, since this won't be just any old full moon, and it'll actually be the second full moon of the month, you might actually start experiencing double the hormonal fluctuations you normally would, according to Migraine.com. Oh, joy. No seriously, I'm trying to contain my excitement right now, but I just can't, guys.

On the plus side, if you feel like your sex drive typically soars right before your time of the month (because that's totally a thing, people), you might be even more inclined to get down and dirty during the super blue blood moon. While there's no exact scientific proof for this one either, some speculate that all the cosmic energy will amp up your sex drive, making your libido do some seriously next-level sh*t.

With all of this juicy info on how the super blue blood moon is going to influence your monthly menstruation, you might find yourself anxious AF in anticipation of what Jan. 31 will bring.

Honestly, though, you probably don't have to worry too much about your hormones going wild or anything like that, because science really isn't buying any of it.

According to The Debrief, the period-tracking app Clue conducted an experiment that looked into 7.5 million menstrual cycles among its users to try to determine if the phase of the moon had any effect on women's periods. The app creators ultimately discovered that there was no link between the lunar cycle and when a woman's period begins and ends, so yeah, there's that.

What's more, a 2013 study published in the journal Endocrine Regulations looked even deeper into the correlation between moon phases and menstruation to see if the speculation about the gravitational power on our hormones was factual or simply a myth. What the researchers discovered was that, out of the 74 women whose cycles were tracked, there was ultimately no relation between their periods and the moon phases. They concluded that any reports of menstrual irregularities during certain phases of the moon were simply a coincidence.

Look, the important takeaway here is that every body is different, and therefore everyone's experiences are different when it comes to these things. Though science says that the upcoming super blue blood moon isn't going to do a damn thing when it comes to your monthly PMS symptoms, many anecdotal sources are hell-bent on the fact that the full moon is powerful AF and plays a definite role in your period.

The bottom line is this: Try not to worry about anything going too out of whack in your body come Jan. 31. Sit back, relax, and enjoy the glorious and breathtaking sight up in the sky.