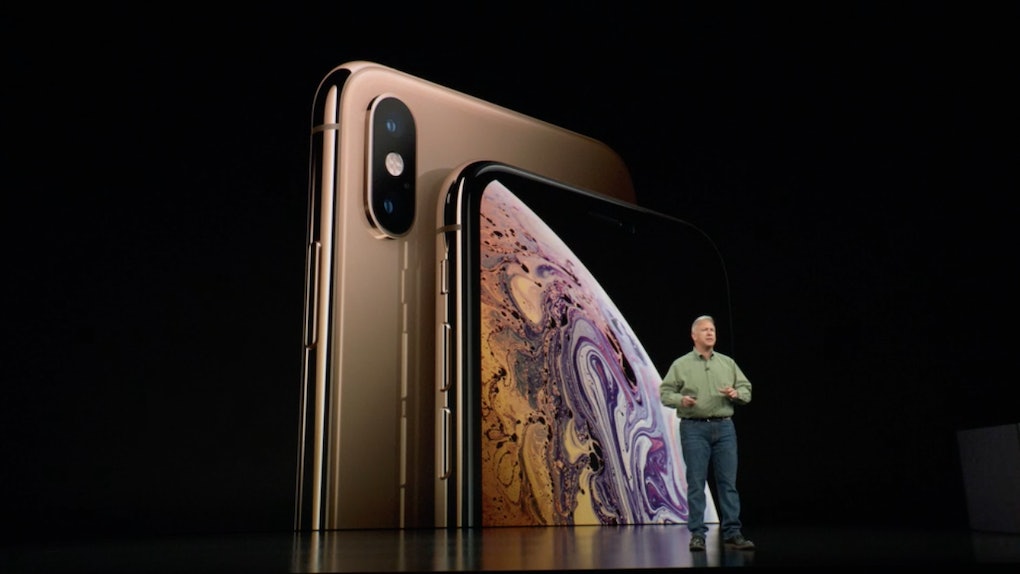 How Much Will The iPhone XS Cost? The Price May Sound Familiar

ICYMI, Apple kicked off a blitz of cool new gadgets on Wednesday, Sept. 12. Almost every offering looked more lust-worthy than the next at Apple's annual September launch event, but none more so than the highly-anticipated iPhone XS. If you're wondering how much will the iPhone XS cost, prepare to pay a pretty penny for the newest generation of iPhones.

When rumors first started swirling about the new and improved Apple smartphone a few weeks ago, experts projected that the newest 5.8-inch OLED iPhone XS and the 6.5-inch OLED iPhone XS Max would be the most expensive phones from Apple thus far. Well, an iPhone XS will cost you $999, while you'll have to shell out $1,099 for an iPhone XS Max. This sounds just like the iPhone X, which debuted with a price of $999 back in September 2017. While many groundbreaking features from the iPhone X — like dual rear cameras, no Home button, and face ID — are included, it sounds like the iPhone XS has worked out the bugs and made big improvements on the original design. In addition to faster processing capabilities, Apple also paid heed to a survey that found that 75 percent of customers cited a longer battery life as their most desired new feature. While graphics have continued to improve and phones have gotten thinner, all of that has taken a toll on the battery lives of later models. Apple's decision to add half an hour of battery life to the iPhone XS (as compared to the iPhone X) proves that the more practical consideration is on their mind, and the iPhone XS delivered. Add an updated camera and that beautiful OLED screen, and it's no wonder that Apple's latest offering doesn't come cheap.

This contradicts analysts' predictions that Apple would be banking on the iPhone mania and continue raising their prices.

"We also take this opportunity to eat our hat somewhat on our cautious stance this summer," Goldman Sachs analyst Rod Hall said about the company's decision to raise the price target on Apple stock all the way to $240 per share. "We had expected worse iPhone X demand and some pullback in the stock — clearly neither of these two things happened." Goldman Sachs estimated that Apple would be raising the prices on its new lineup, including the iPhone XR which had previously been touted as a lower budget option.

However, if you're still not willing to pay $1,000 for a phone, Apple's new iPhone XR is an attractive and reasonably-priced option. At just $749, the lower-budget model sacrifices a few of the features of the iPhone X while adding so much more. Instead of an OLED screen, the iPhone XR has a 6.1-inch LED screen, and it features aluminum instead of stainless steel edges as well as a single rear camera. However, demand is high, and Apple confirmed that it would be pushing back its official launch until Oct. 26 to fix production issues while allowing the more expensive iPhone XS offerings to gain more traction.

The iPhone XS has an official launch date of Sept. 21, so there's only a few more weeks for you to decide if the price tag is worth it. In the meantime, I'll be cutting back on my expensive PSL habit and embracing college-era instant noodles.