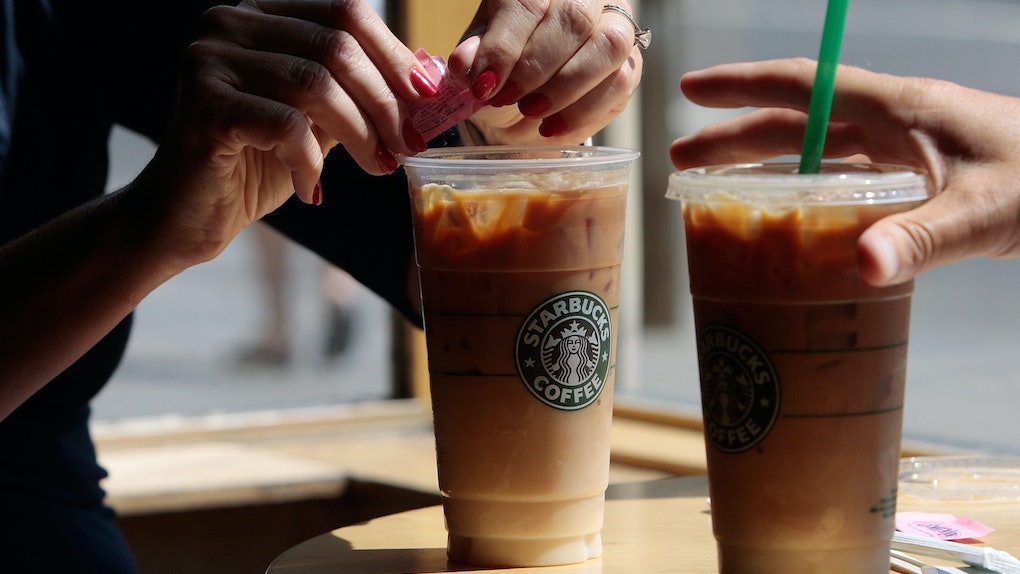 How Much Caffeine Is In Starbucks' Pumpkin Cream Cold Brew? It'll Wake You Up

By now, you have most likely heard the big news that on Tuesday, Aug. 27, Starbucks will be releasing a totally new beverage to its pumpkin spice lineup for the first time in 16 years. And since slurping down enough caffeine to power an entire office is one of my goals on a daily basis, it's absolutely crucial for me to know how much caffeine is in Starbucks' Pumpkin Cream Cold Brew before embarking on my morning coffee run. If you're also curious about what kinda a punch this sip packs, read on for some pretty good news for caffeine fans.

Like I said, I pretty much have a lifetime devotion to caffeine — getting in a decent amount before, during, and after a full day of work is absolutely vital for my general morale. So, you can most likely imagine how excited I am to hear that a Grande Pumpkin Cream Cold Brew from Starbucks contains a very respectable 185 milligrams of caffeine, according to press materials sent to Elite Daily from Starbucks. Based on that number alone, you can probably guess what drink I'll be ordering all season long.

To give you a little extra ~perspective~ on all of this, a Grande Cold Brew from the Seattle-based coffee chain boasts a whopping 205 milligrams of caffeine, according to the press release, so the Pumpkin Cream Cold Brew has just a little less than the plain version. However, it contains a significant amount more than the chain's other fall drinks. A Grande PSL contains 150 milligrams of caffeine, a Pumpkin Spice Frappuccino contains 100 milligrams, and a Pumpkin Spice Chai Tea Latte contains 70 milligrams. So, in relation to Starbucks' other pumpkin spice drinks, it seems like the Pumpkin Cream Cold Brew comes out on top.

In case you aren't yet familiar with the Pumpkin Cream Cold Brew, it features Starbucks' signature Cold Brew which is blended with vanilla, and topped with pumpkin cream cold foam, and a pumpkin spice topping. Yum.

The release of Starbucks' fall line is bound to be an exciting one. According to the press release, the chain will be hosting a livestream event, similar to the Pumpkin Spice Latte hatch of 2017, if you recall that seriously special day. This one will be hosted on the Starbucks Facebook page at 1 p.m. ET on the launch day, Tuesday, Aug. 27, when “beliefers” will ring in the most colorful season of the year.

If you're all too excited to get your pumpkin spice fix, the chain is cutting fans a deal. On Thursday, Aug. 29, customers will be able to take advantage of BOGO handcrafted Grande or larger beverages after 3 p.m., according to the press release. Double the PSL, double the fun.

OK, now I'm ready for fall. Between foliage, the entire pumpkin spice lineup, and — most importantly — a pumpkin spice drink that fulfills my caffeine needs, there's a lot to look forward to. Spooky season, here I come.