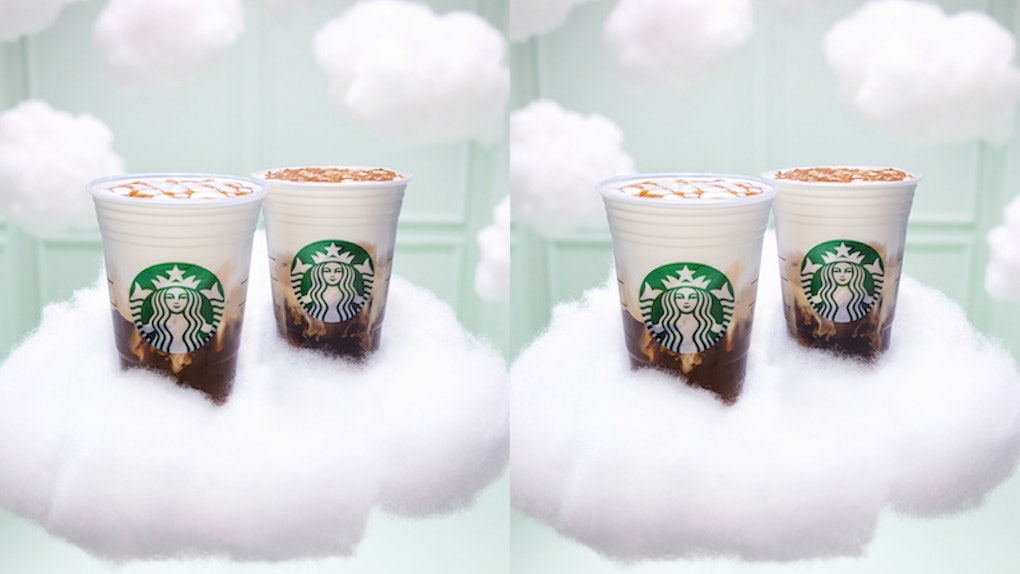 How Much Caffeine Is In Starbucks' Cloud Foam Drinks? They're Pillowy Pick-Me-Ups

Starbucks released its dreamiest drinks yet on Tuesday, March 5. The pillowy pick-me-ups — officially called the Iced Caramel Cloud Macchiato and the Iced Cinnamon Cloud Macchiato — feature layers of "fluffy foam" that's reminiscent of billowy clouds. To me, they look like beverages that I'd sip on before cuddling up in bed — but after learning how much caffeine is in each one, I probably won't be doing that. So, how much caffeine is in Starbucks' Cloud Foam drinks, anyway? Let's just say that you're probably better off drinking them in the morning than at night.

When you take the drinks' main ingredients into consideration, you'll know exactly what I mean. Although each variation of the beverage features its own unique flavor assets (vanilla-flavored syrup in one and cinnamon-flavored syrup in the other), they both possess a few common ingredients. According to an email from Starbucks, both the Iced Caramel Cloud Macchiato and the Iced Cinnamon Cloud Macchiato feature a "cloud of cold milk foam," caramel drizzles, and espresso shots. Since espresso shots are used, you can expect caffeine in the drinks. However, the amount of caffeine in each beverage will depend on the size of the drink.

Let's talk about those sizes, so you can decide which one you want to start your morning with.

All of those billowing cold milk foam clouds are deceiving, aren't they?

Sure, the amount of caffeine in each new Cloud Foam drink is the same — but that doesn't mean both are 100 percent similar. As I previously mentioned, each option has its own flavor added to it. Knowing the difference between the two will help you decide which one you'll enjoy more.

I'll start with the Iced Caramel Cloud Macchiato. Aside from the cold milk foam, espresso shots, and caramel syrup, the selection features vanilla-flavored syrup. If you're into cinnamon, you might like the Iced Cinnamon Cloud Macchiato better. According to Starbucks' menu, the latter features cinnamon-flavored syrup and a "dusting of cinnamon." With that being said, figure out which flavor you're craving and order accordingly.

Regardless of which flavor you choose, you'll be getting a decent amount of caffeine with every sip. Just keep the drinks' sizes under consideration while you're placing your order.