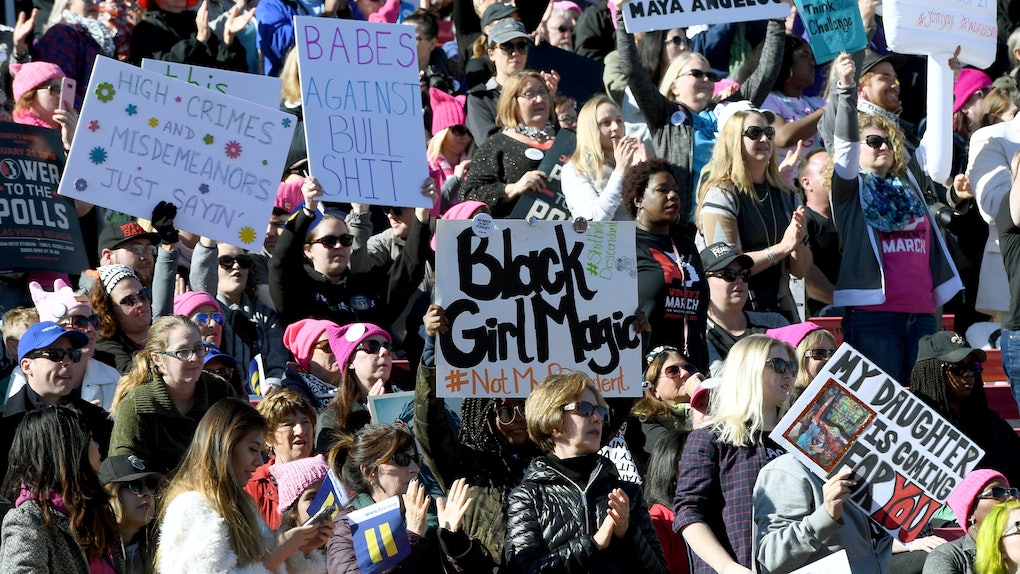 How Many People Attended The 2019 Women's March? Here's How The Crowd Size Has Changed

On Saturday, Jan. 19, women and allies alike showed up en masse across the United States to participate in the third annual Women's March. But while the first march proved an overwhelming success in terms of sheer numbers, photos and estimates of the crowds this year showed a deflated attendance. For those of you keeping track, here's how many people attended the 2019 women's march.

Crowd size estimates for the official march in Washington D.C. are not exact, but the Associated Press put the attendance for 2019 around 100,000. A public relations representative for the Women's March tells Elite Daily on Jan. 22 that the estimate for the D.C. march was "at least 60,000," but did not offer any additional comment. Elite Daily reached out to the representatives to follow up for additional comment on this year's attendance and what may have affected it, but did not hear back at time of publication.

Whatever the number, these indications would suggest that 2019's turnout was a huge drop from previous years. The initial march also took place in the nation's capital, on Jan. 21, 2017 — the day after President Donald Trump was inaugurated in the very same spot. The attendance for that D.C. march in 2017 was estimated to be around 500,000 people. There was an estimated total of around 4 million participants across the United States, per The Washington Post, between the official march and the 653 sister marches counted in other U.S. cities — which makes it likely the largest march in U.S. history. The Post also counted 271 sister marches abroad.

The following year, in 2018, the official march took place in Las Vegas, NV, with 486 recorded sister marches. Between all of those, an estimated 1.5 to 2.5 million people showed up, per Vox.

This year, the official march has reportedly fallen in attendance again, bringing out around 100,000 people to D.C., and the AP adds that the permit size for that event was in anticipation of 500,00 people. Photos show the crowd from the official event on Saturday. While still small compared to its first one, the third year's attendance, at 100,000 people, was not exactly shabby. This count also doesn't include sister marches around the country, which are likely to bump up the nationwide tally.

However, the smaller crowd size appears to have been reflected in other sister marches around the country, too. Some 100,000 to 200,000 marchers were expected in Los Angeles, compared with a reported turnout of 750,000 in 2017. On social media, people posted photos of the 2019 turnout from sister marches across the U.S.

There are several reasons the turnout for the march might've been lower this year. For starters, the country was entering its 29th day of the government shutdown, which has left some 800,000 federal employees on furlough or working without pay. Some 51,000 of these workers are TSA agents, working to protect air travel passengers at airports; as a result, many airports have been impacted, with reports of long lines, delays, and closures affecting travelers. The shutdown was not anticipated to prevent the D.C. march from happening, but organizers reportedly had to adjust the march's location to account for logistical complications posed by the shutdown.

What's more, the movement as a whole has been roiled by conflicting leadership and diverging factions that have resulted in multiple separate groups that all arose out of the same initial movement. Per The New York Times, March On, Women's March Global, and Women's March Alliance have all asserted their independence from the U.S.-led Women's March. Recently, allegations of anti-Semitism and homophobia of some of the Women's March organizers prompted at least one sister march, in New Orleans, to be canceled, according to Vox. Elite Daily reached out to Women's March organizers for comment, but did not hear back.

Every member of our movement matters to us — including our incredible Jewish and LGBTQ members," the Women's March organizers wrote in a Nov. 20 statement, responding to the criticism. "We are deeply sorry for the harm we have caused, but we see you, we love you, we are fighting with you."

It's unclear to what degree the controversy might've impacted the 2019 turnout. Whatever the reason(s) for the downturn, the turnout this year appears to be a small fraction of what it was in previous years. We'll have to see what next year holds.