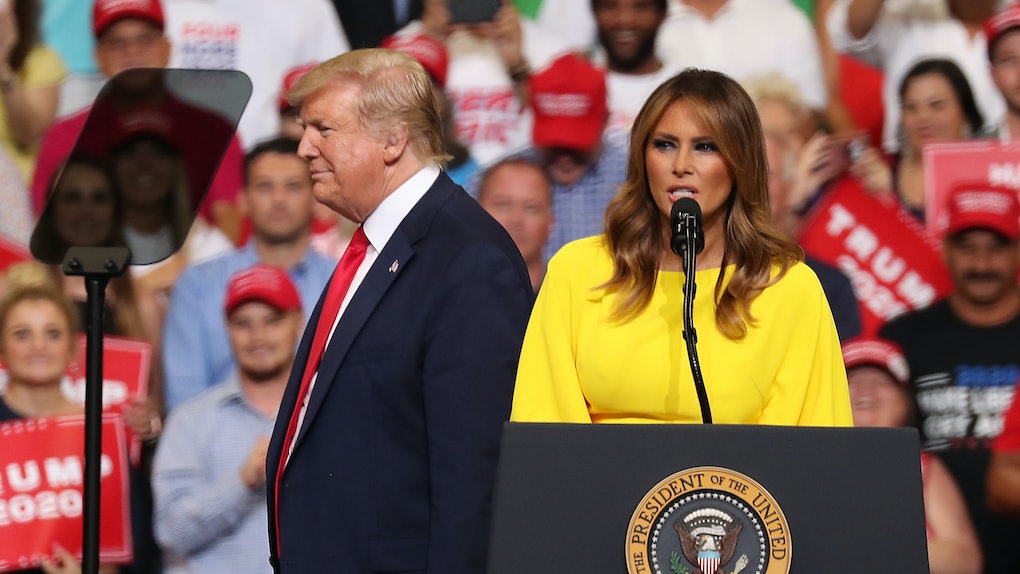 How Many Languages Does Melania Trump Speak? More Than Her Husband, For Sure

Though President Donald Trump has chosen to almost exclusively speak English, he surrounds himself with family members with much wider linguistic abilities. Even far before his presidency, his first wife, Ivana Trump, was Czech, and now, the current first lady is neither a native-born American nor a native English speaker. However, her language skills are pretty proficient. So how many languages does Melania Trump speak? Color me impressed.

Melania Trump is reportedly fluent at least five languages: in addition to her native Slovenian, she speaks English, French, Serbian, and German, according to CBS News. Other sources also include Italian in this list.

Since becoming a high-profile public figure, Trump has received media attention for her bilingualism. In September 2017, Trump threatened a lawsuit against a Croatian language school featuring her face with the ad copy, “Just imagine how far you can go with a little bit of English.” (A spokesperson later clarified the billboard was meant to show her as a role model, not mock the first lady.)

While the president apparently only speaks English, the first family is certainly a multilingual one. Like many mothers with more than one language under their belts, Trump has made efforts to pass on the trait to her children. Their only son Barron Trump is reportedly bilingual in English and Slovenian; in 2009 she told People that he was speaking both languages, and also learning French.

For the most part, Trump has played the role of a reserved and sometimes even mysterious first lady. Unlike past presidents’ wives, who have spearheaded national projects and taken on roles of their own within the White House, Trump’s public life has been a bit more in the dark. However, she did launch her anti-cyberbullying "Be Best" initiative in 2018 to advocate against cyberbullying and opioid abuse in children.

Trump was born in Slovenia in 1970, making her the second foreign-born first lady in history after Louisa Adams. She is also the only first lady whose native language is not English. Before meeting her future husband, she modeled in Europe beginning at the age of 16.

Trump first met President Donald Trump at a fashion party in New York in 1998, according to Biography.com. Six years later, the couple became engaged and gave birth to their first child, Barron Trump. She also became a U.S. citizen in 2006.

It's unclear whether Trump's reported linguistic prowess is much of an asset at international gatherings or diplomatic meetings, but it sure offers contrast to a presidency that has emphasized English as the country's primary language. If anything, it's more reflective of his five children, too, who mostly have at least dabbled in a few other languages. As for whether Trump exerts any multilingual influence over the White House, however, there's little evidence she has or plans to soon.