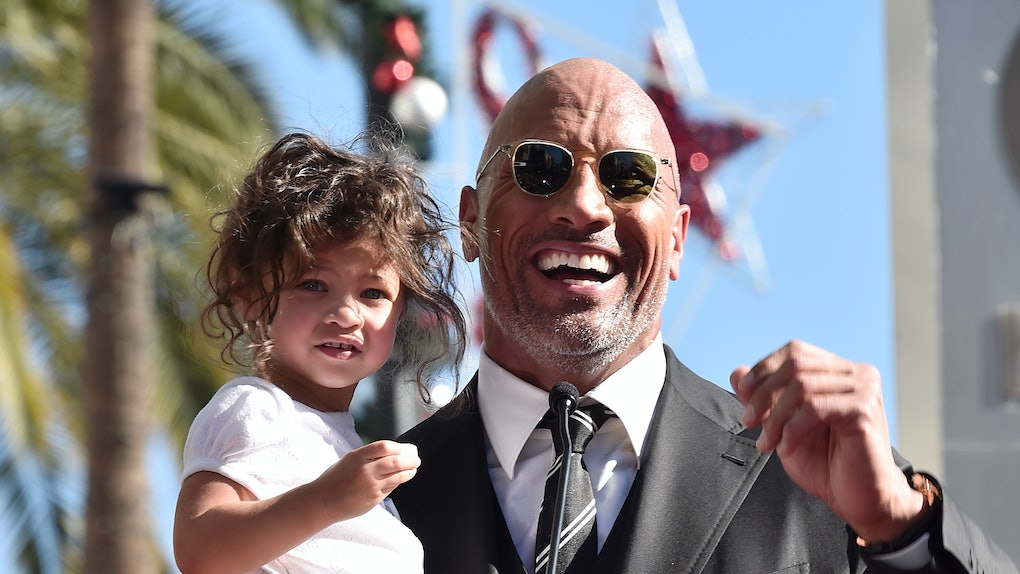 How Many Kids Does The Rock Have? The Actor Is Expecting Another Child

Dwayne Johnson, known to many as "The Rock," is the beefiest, hunkiest celeb and was very well-deserving of his 2016 People's "Sexiest Man Alive" title. But at home, he goes by another title: Dad. As if he couldn't get any hotter, we can now envision The Rock walking around with a BabyBjorn in his home trying to get a lil' baby to sleep. Swoon. So, how many kids does The Rock have? Here's what we know.

The Rock currently has two children.

While The Rock currently has two children – both daughters – he is actually expecting his third, another baby girl. On Dec. 11, he announced that he and his girlfriend Lauren Hashian are expecting their second child together in an adorable Instagram post. He said,

Our Jasmine Lia would like to make a big announcement - IT’S A GIRL! 🌺@laurenhashianofficial and I are boundlessly grateful for this blessing as this spring we’ll welcome our second baby. Plus, Jazzy is excited to boss around and protect her lil’ sis.And once again, big daddy is completely surrounded by beautiful estrogen and loving, powerful female mana. All girls. One dude. And a boy dog. I wouldn’t have it any other way.

And if you didn't know how freaking cute his daughter Jasmine Lia is, might I interest you in checking out the baby announcement below:

And in case you want to see Jasmine literally ghosting her dad, check out the hysterical video The Rock uploaded to Instagram:

His oldest daughter is already starting her own career.

The Rock has a daughter, 16-year-old Simone Garcia Johnson, from his previous marriage with his first wife, Dany Garcia. And Simone isn't just living in her dad's shadow, either. She'll be the first ever Golden Globes Ambassador at the show this January, a title that was formerly known as Mr. or Miss Golden Globe. In an interview with Variety, Simone said,

I’ve been lucky enough to grow up in a household with strong role models and feel so honored to represent the HFPA for its 75th Anniversary. As the newly minted Golden Globe Ambassador, I hope to serve as a role model to young people everywhere and empower them to speak out on issues they are passionate about.

As if that's not incredible enough, she's also a signed model with IMG Models. So yeah, you can say that the girl is crushing life right now.

Here she is striking a ~pose~:

And here she is with her darling dad, aka The Rock:

Is anyone else here thirsty, or is it just me?

And here she is with The Rock and her mom, Dany Garcia (who is actually The Rock's manager and producing partner):

The Rock is "so happy" to be having another daughter.

The Rock stopped by The Ellen DeGeneres Show to chat about how excited he is to add another little lady into his household. He said,

Lauren and I are so happy... The crazy thing is, I was raised by women, and still to this day, I’m totally and completely, 100 percent surrounded by only women ... And I love it.

The Rock's girlfriend, Lauren Hashian, is "grateful" for her second pregnancy.

In an Instagram post, Hashian announced her pregnancy in a truly beautiful way, but also made sure to insert just a little bit of comedy at the end of her post. She wrote,

I know I'm late to the party... Sometimes life gets full and busy in the best ways :)... So grateful and in awe of this time. To experience creating a little life is just incredible. This beautiful cycle of life and womanhood beginning again. And like Big Daddy says - Couldn't be prouder of all the kickass women she's going to have around her! And Men of course ;).. #LetsJustHopeBigDaddyDoesnt=20lbBaby

Congratulations to the happy couple!