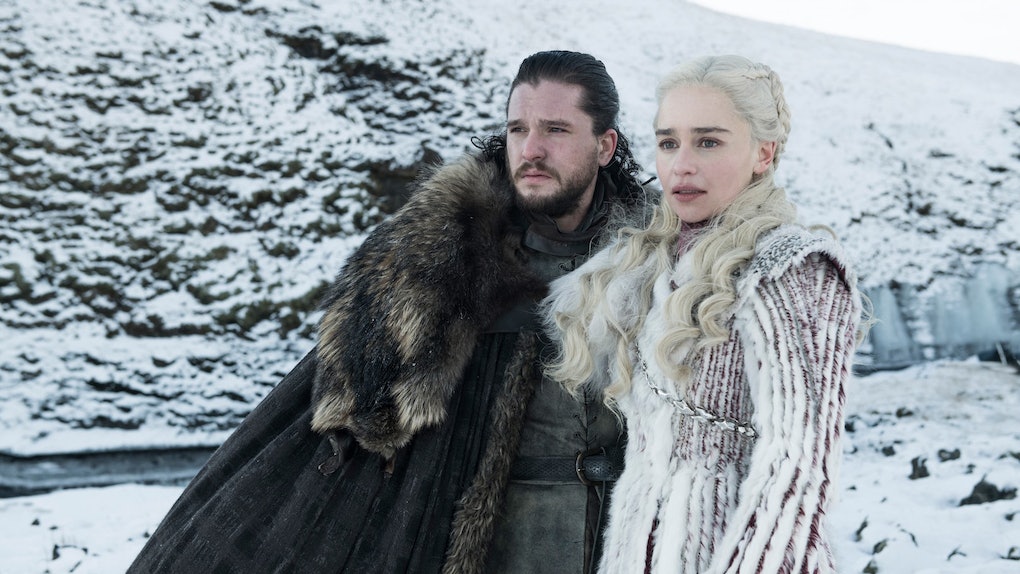 How Many 2019 Emmys Did 'Game Of Thrones' Win? Their Watch Is Over

No show entered the 2019 Emmy Awards with higher expectations than Game of Thrones. HBO's ubiquitous fantasy epic has been an awards-season juggernaut ever since it first premiered back in 2011, and now that it has concluded its eighth and final season, Game of Thrones scored a staggering 32 Emmy nominations this year, breaking the record for the most nominations in a year by a single series. So, did the show live up to all that potential with some big wins? How many 2019 Emmys did Game of Thrones win? Let's go over all the show's big wins and surprising losses from its final Emmys night.

With a record-breaking 32 nominations at the 2019 Emmys, Game of Thrones went into the big night already a winner. The number of nominations easily broke the previous record of 27 that was set by NYPD Blue in 1994, and it seemed to guarantee that the dragon-filled final season of HBO's hit series would score at least a couple big wins at Sunday night's Emmys. Actually, the show had already won a hefty haul of Emmys even before Sunday night's ceremony. The series took home ten Creative Arts Emmys the week prior to the Primetime Emmy Awards. So, at Sunday night's ceremony, the show was actually nominated 14 times in the major categories.

Out of the 14 major awards it was up for, Game of Thrones took home only two Emmy awards this year. Yeah... not exactly the amount of wins that fans were hoping for. So you can get a good idea of how Game of Thrones Season 8 performed at the Emmys this year, let's break down all of the categories it was nominated in.

As all TV fans know, this is the big prize of Emmys night. Game of Thrones has won this award each of the last three years that it has been nominated, and it continued its streak by winning the major award yet again at the 2019 Emmys.

Kit Harington had never been nominated in this category before this year, but he lost the category to Billy Porter, who won for his role on Pose.

Like Kit Harington, Emilia Clarke had never been nominated for her role on Game of Thrones prior to this year's Emmys, but she lost the category to Killing Eve star Jodie Comer.

When it came to the supporting categories, Game of Thrones was absolutely stacked in terms of nominations. Alfie Allen, Nikolaj Coster-Waldau, and Peter Dinklage were all up for the Supporting Actor in a Drama Series award, and Peter Dinklage ended up winning the award.

The category that Game of Thrones most filled out was the Supporting Actress in a Drama Series race. Gwendoline Christie, Lana Headey, Sophie Turner, and Maisie Williams were all up for the trophy, almost assuring that the award would go to a Game of Thrones star. But despite all those noms, Julia Garner actually took the trophy for Ozark.

Outstanding Directing for a Drama Series

Game of Thrones also filled up the Directing for a Drama Series category with its slate of directors. David Benioff and D. B. Weiss, David Nutter, and Miguel Sapochnik were all nominated in this category for the Season 8 episodes that they respectively directed. But all three GoT directors ended up losing the category to Jason Bateman for the episode of Ozark he directed.

Outstanding Writing for a Drama Series

And finally, showrunners David Benioff and D. B. Weiss also scored a nomination for Outstanding Writing for a Drama Series for the script of the show's series finale, "The Iron Throne." Unfortunately, Game of Thrones lost this category to Succession.

So, in the end, Game of Thrones went out with more of a fizzle than a bang at its final Emmys. It only took home two major awards, but then again, one of those trophies was the Outstanding Drama Series award, so Westeros still won big... even if it did not win often.