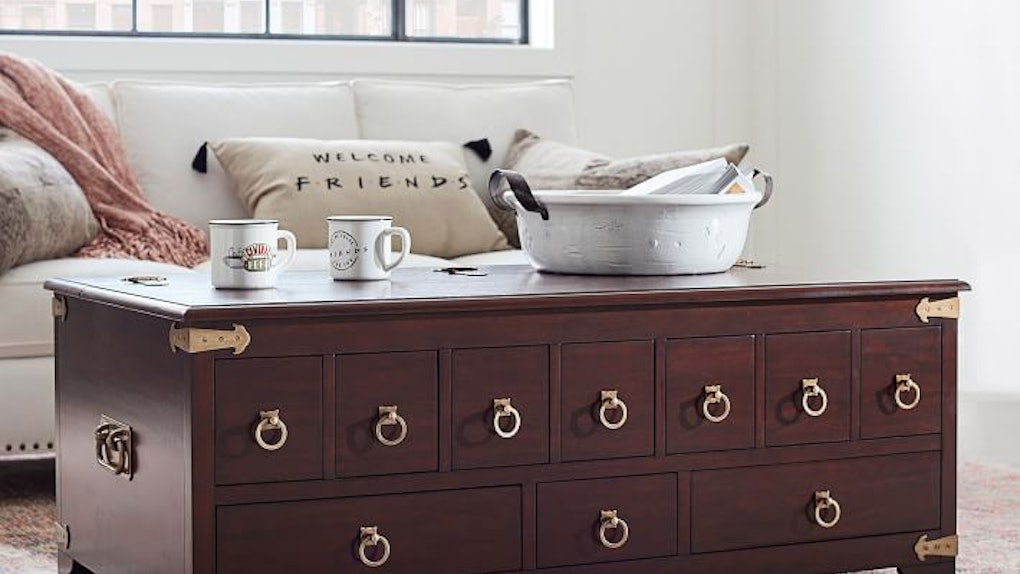 How Long Will Pottery Barn's 'Friends' Collection Be Available? You Still Have Time To Shop

It's hard to believe, but it's been 25 years since Monica, Rachel, Phoebe, Chandler, Ross, and Joey graced our television screens and gave us a hilarious, albeit not entirely accurate, depiction of life as young 20-somethings in New York City. If you're a fan of the series, you probably caught wind of the Friends-themed Pottery Barn collection that made its way to the home decor superstore back in late July. If you've yet to spring for some on-theme merch that pays tribute to the best moments and most iconic sayings from the hit series, you might be wondering: How long will Pottery Barn's Friends collection be available? Here's what to know about finally buying on that piece you've been eyeing.

Back on July 30, Warner Bros. Consumer Products first announced that it was teaming up with Pottery Barn to bring a limited-edition Friends collection into fruition, meaning that we could all have a little slice of Central Perk in our homes IRL if we were willing to purchase it. The line — which includes the iconic $1,099 apothecary table that Rachel secretly purchased despite Phoebe's aversion to Big Furniture — included 14 different pieces starting at just $12.50 when it launched, giving you a potentially affordable way to add some nostalgia to your home.

Marta Benson, Pottery Barn's President, said in a press release at the time:

Friends is one of the most beloved sitcoms of all time, and we are excited to celebrate the show’s 25th anniversary with this spirited Friends-inspired collection for the home. The Pottery Barn assortment is an ode to the enduring popularity of the show, its cast of characters and nostalgic references, and it gives Friends fans yet another way to enjoy, relive and share their favorite moments.

Considering that the collection has now been out for a month now, you might be wondering if you missed your chance at scoring a Central Perk coffee mug or a Friends-emblazoned throw pillow for your home. However, the good news is that the home decor retailer has no plans to pull the collection as of now.

A Pottery Barn rep confirmed to Elite Daily in an email, "We don’t have a formalized end date right now – the collection will be available through the end of the year."

That being said, I'd probably get a move on it if you've been eyeing any of the pieces. At the time of publication, I noticed that quite a few of the mid level-priced items like the $29.50 purple Friends Door Apartment pillow, the $34.50 Friends Central Perk Sofa Pillow, and the $34.50 set of trifle-printed Tea Towels were all out of stock. However, it looks like you can currently pre-order items that are sold out and Pottery Barn will send them to you when they are available again.

If you don't want to wait until a restock occurs, there are some other items to choose from that are still available, including the piece de resistance of the collection: The $1,099 Apothecary Table that looks just like the infamous piece from the show and was "recreated down to the last detail, from the antique-inspired hardware to drawers originally designed for CDs," according to the project description.

While it doesn't sound like this collection is going anywhere in the coming months, I'd probably make some moves on the pieces that you want if you don't want to have to wait for a re-stock to deck out your home in all the Friends merch.