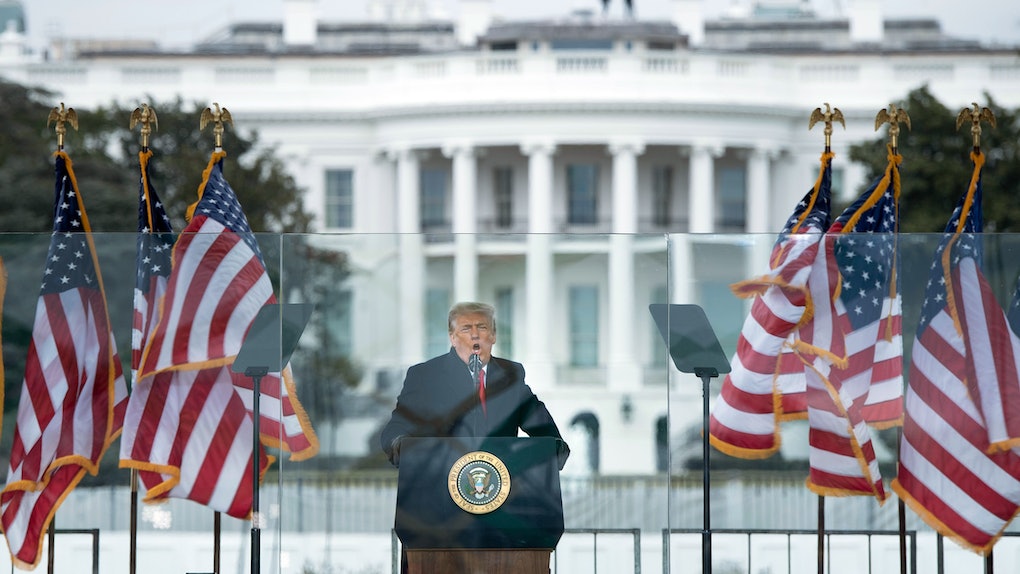 How Long Does It Take To Impeach A President? It’s (Usually) Not Fast

Congress is once again deciding whether or not to impeach President Donald Trump after a flood of his supporters stormed the U.S. Capitol on Wednesday, Jan. 6. Since President Trump is set to leave the office on Jan. 20, you may be wondering how long it takes to impeach a president, and whether there's enough time for Congress to go through all the steps. Though it's possible to impeach Trump before President-elect Joe Biden is sworn in, the process is usually not fast.

As of Jan. 10, Trump may be facing impeachment for allegedly inciting the U.S. Capitol riot on Jan. 6, with plenty of lawmakers calling for his removal from office. The White House did not previously reply to Elite Daily's request for comment on the riot or Trump's role. On Jan. 7, House Speaker Nancy Pelosi threatened to begin the impeachment process if Vice President Mike Pence does not invoke the 25th Amendment, which allows a vice president and the Cabinet to remove a president from office. On Friday, Pelosi sent a letter to House members affirming that Congress will proceed with impeachment if Trump doesn't resign immediately. The White House did not respond to Elite Daily's request for comment regarding a possible second impeachment.

Since Trump has less than two weeks left in office, the latest calls for impeachment face some major hurdles in terms of timing. After all, past presidential impeachments, including the House's impeachment in 2019, are typically lengthy affairs that come with weeks of hearings and debate. Trump's previous impeachment trial took 49 days, with articles of impeachment introduced to the House on Dec. 18, 2019, and his acquittal by the Senate on Feb. 5, 2020.

Trump is only the third U.S. president in history to be impeached — let alone face the possibility of being impeached twice — which means that there's not a whole lot of precedent on how long an impeachment takes. The previous impeachment trial of President Andrew Johnson in 1868 took 92 days, and that of President Bill Clinton in 1998 took 55 days. Between all three impeachments, the process has averaged a total of 65 days from start to finish.

The impeachment process is lengthy because it involves two parts: actual impeachment in the House of Representatives, and a trial in the Senate. A simple majority of votes in the House is required to officially confirm articles of impeachment against a president, after which the Senate must vote on whether to convict. Two-thirds of the senators present at the time of trial must be in favor of a conviction in order to impeach. With a 50-50 party split in the Senate once the two Democratic senators-elect from Georgia take office, that means 17 Republicans would need to vote with Democrats in favor of a conviction. If a president is convicted on their impeachment charges, they are automatically removed from office. The Senate may then choose to vote separately on whether to permanently ban the impeached president from holding office in the future.

Pelosi may have a solution that would fast-track the process. The House Speaker has expressed interest in a swift impeachment that would skip an investigation or House Judiciary Committee vote entirely, and only require a simple majority in the House to impeach. However, an expedited trial would require both parties to work together in the Senate to convict, which may be unlikely. In February 2020, only one Republican, Sen. Mitt Romney of Utah, voted to convict Trump on one article of impeachment. But tides may be changing: as of Jan. 10, several Republicans, including Sens. Pat Toomey of Pennsylvania and Lisa Murkowski of Alaska, have publicly supported the idea that Trump should either leave or be removed from office.

Senate Majority Leader Mitch McConnell also suggested in a memo on Jan. 9 that it may be almost impossible begin a trial before Inauguration Day on Jan. 20. The Senate is not currently in session because of the upcoming inauguration and the unlikelihood of all 100 senators agreeing to a last-minute schedule change.

With 10 days of Trump's presidency to go, it's uncertain how the situation will play out. But it's sure to be a wild ride.