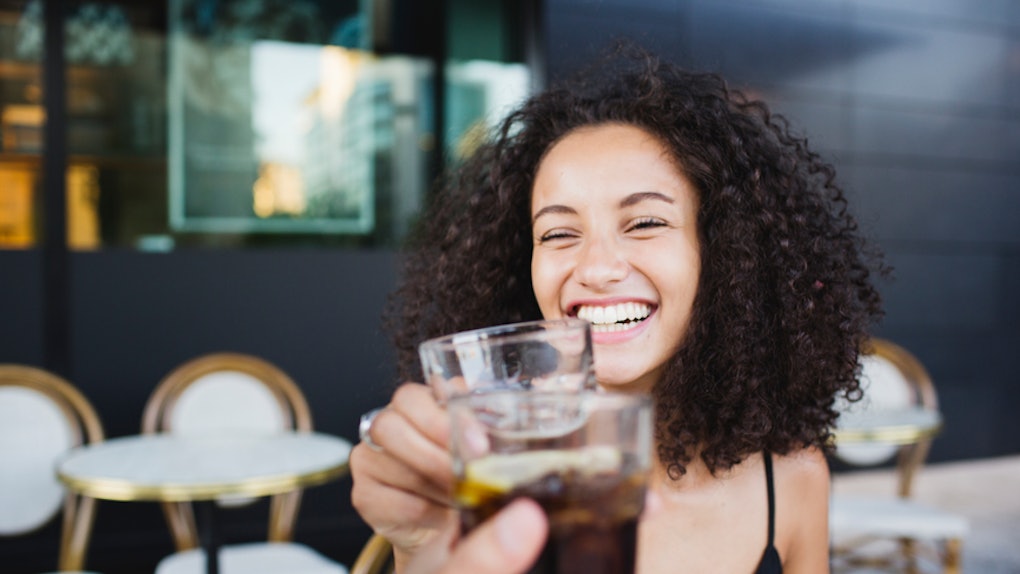 How Drinking Affects Your Mood, According To Science

People often associate alcohol with extreme emotions on either side of the spectrum: It either leads to the greatest night of your life, and/or the worst day of your life just hours later. But if you understand how drinking affects your mood, it can help you figure out the best ways to use alcohol safely and within reason, while also minimizing the amount of mornings that make you feel like you were hit by a bus.

The first thing to know about your body's relationship with alcohol is that not all drinks are created equally. From beer to liquor to wine, the specific type of alcohol you're drinking (including the alcohol percentage, the amount of sugar and other ingredients found within the drink, and the volume of consumption over a period of time) will have a specific and unique effect on your mood. However, there are certain overarching themes to be found within the relationship between your brain and the alcohol you drink.

Drinking regularly can affect the hormone levels in your brain, which is one of the main reasons why you might notice some pretty significant swings in your emotions over the course of a weekend-long bender.

Drinking alcohol affects at least five neuroreceptors in your brain, including serotonin and dopamine, both of which regulate your moods.

To put it simply, drinking alcohol can lower the serotonin levels in your brain, which can take away your body's natural ability to regulate your moods, not to mention your potential to feel happy.

Of course, people often drink alcohol to feel good, so this can be a bit confusing. If alcohol hurts the hormones that help your mood, then why do you have so much fun after three shots of tequila?

The reason you can feel good after drinking a few glasses of your favorite cocktail is kind of a catch-22: Alcohol is a depressant that lowers your inhibitions and relaxes you, but as a result, it can also lead you to feel more anxious, depressed, or gloomy than you'd been before you started drinking.

The important thing to note here, though, is that everyone is different in terms of their emotional and physical responses to alcohol.

According to a 2017 study of nearly 30,000 people across more than 20 countries, the experience of drinking alcohol can vary quite a bit depending on what your beverage of choice is for the night, but it can also vary significantly person by person. For example, over 40 percent of people in the study claimed they felt "sexy" when they drank spirits, but roughly a third of them also reported feeling angry or aggressive when drinking this type of alcohol. So, how do we account for those conflicting reports?

Basically, how alcohol affects your mood can depend on what's happening exactly in your brain at the time that you consume the beverage. If you're in a good mood and then have a few drinks, you might end up in an even better mood as a result of your lowered inhibitions. But if you're feeling depressed, you might end up feeling even more miserable after a few drinks, due to those same lowered inhibitions.

Oftentimes, alcohol can also cause you to be impulsive, or to make decisions you normally wouldn't make.

According to a 2007 survey by Healthcare Improvement Scotland, over half of the people surveyed who'd gone to the hospital for self-inflicted injuries had consumed alcohol immediately before or while harming themselves.

To be clear, alcohol is not a solution to any long-term feelings of sadness or depression, and can, in fact, make matters way worse if you try to use it as a form of medicine. In any given context, alcohol is best used as a way to add to your enjoyment of a social situation, or to take the edge off a bit after a long day, rather than as something you rely on to get through a situation.

If you notice strange mood swings or weird responses happening consistently when you drink, it's in your best interest to speak to a medical professional ASAP, and to try not to drink until you have a better idea of why your body's responding the way that it is.

More like this
The Mythical Creature You Are, According To Your Zodiac Sign
By Roya Backlund
These 40 Clever Vaccine Selfie Instagram Captions Deserve A Shot On Your Feed
By Rachel Chapman
10 Fun Outdoor Spring Fitness Activities You Can Do In Your Own Backyard
By Marisa Casciano
Stay up to date