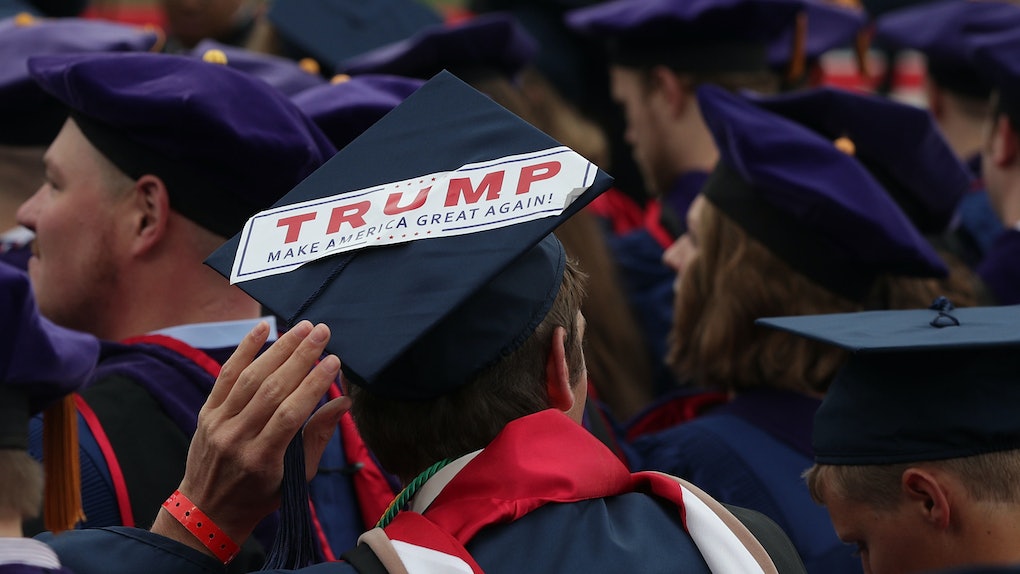 How Does The Tax Bill Affect Students? Key Points Are Staying The Same

With the GOP's tax bill all but signed into law, people will soon be able to definitively tell what differences there will be between how they file tax returns in the coming new year and how they'll file them in the future. In some areas, such as the deduction families can get per child, dramatic changes are coming. When it comes to how the tax bill affects students, however, Americans can expect much of the same.

In other words, key parts of the country's current tax laws that relate to student-specific provisions will not be altered by the Republicans' tax plan. "On balance, the final bill is far better news — especially for students and families — than it could have been," Terry W. Hartle, senior vice president of the American Council on Education, told The Washington Post.

Here are the three key provisions for students that will remain unaffected by the GOP tax bill:

Perhaps the most important of those provisions is an exemption for graduate students' tuition waivers. About 145,000 graduate students nationwide receive waivers that knock off all or part of their tuition fees, typically in exchange for some type of work. Under the final GOP tax bill, the worth of those waivers will not get taxed. That exemption appeared to be on its way out the door at one point, though.

The House of Representatives' original version of the GOP's tax reform bill planned to tax the waivers. When it was time for Republicans in the Senate to take over and pass the bill, they changed things up. The Senate GOP did not include a repeal of the waiver exemption. When Republicans had to go to conference committee to resolve the differences between the House and Senate bill, a number of Republicans campaigned against repealing the exemption.

"Repeal of the income exclusion for graduate students would subject thousands of graduate students to a major tax increase at a time in their lives when they lack the ability to pay," a joint letter signed by 31 Republicans read. "Graduate students never see the money from a graduate tuition waiver. Their university charges them for tuition then immediately waives it."

Ultimately, Republicans would decide to leave the waivers untaxed.

It's not uncommon for employers to help their workers pay for graduate programs. And when those employers do contribute to an employee's tuition, that employee can deduct up to $5,250 of the contribution from the portion of their yearly income that is taxable.

Kathleen Coulombe, senior advisor for government relations at the Society of Human Resource Management, explained the program for CNN.

"If your employer provides the benefit, it doesn't have to be related to your current job," Coulombe said. "You can use it to re-skill or to transition into something else, and employers get to keep your talent in house."

Under current tax law, borrowers of student loans are allowed to take the amount of interest they paid to lenders and deduct up to $2,500 of that amount from your taxable income, unless you're a single person earning more than $80,000 a year, or part of a couple who makes more than $165,000 together.

Much like the two previous provisions mentioned, the House GOP's tax bill proposed removing this deduction, however, the final bill included the deduction.

In short, while these popular provisions all faced the prospect of being repealed by Republican tax reform, the final negotiations between the GOP Congress ensured that the most popular aspects of current tax law for students would remain going forward.