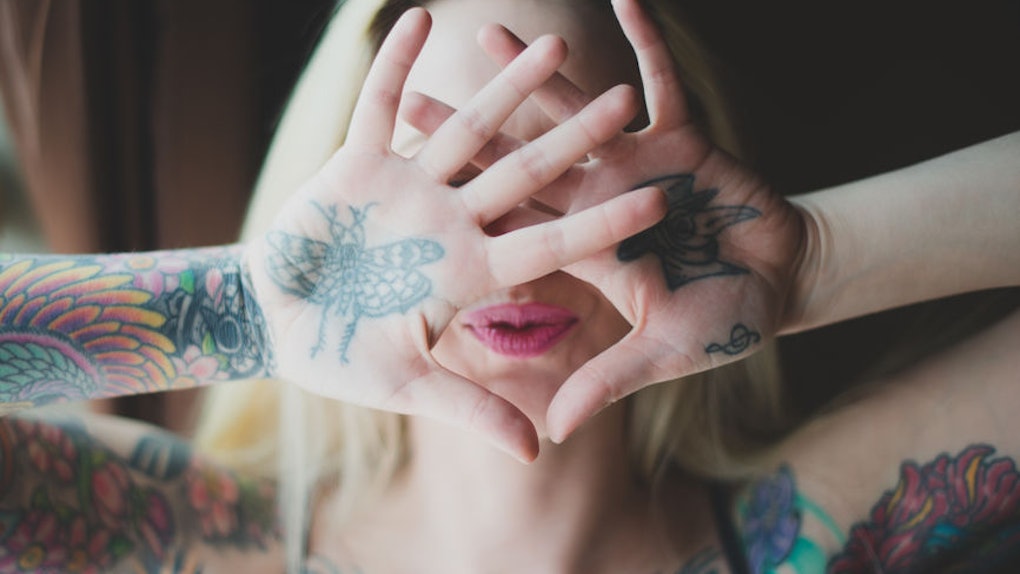 How Do You Get A Tattoo Removed? Here's Exactly How The Process Works

Getting a tattoo can be a liberating process. But since making the decision to get one is a permanent choice, after a few years, some end up wishing they could turn back the hands of time. Luckily, in 2018, there are some options if you want to get rid of your ink, and Elite Daily reached out to some experts to find out more on how to get a tattoo removed.

According to Fresh Start Laser Tattoo Removal Clinic in Texas, in 2017, approximately 11 percent of all people with tattoos have them removed. Of that 11 percent, 70 percent are women, while only 30 percent of men go through with treatments. WebMD reports that one study found women tend to remove their pieces because of "pressure from others or social stigma." But in general, both sexes reported that the top reason for removing a tattoo is either from embarrassment overtime or just wanting it removed.

While treatments can be costly, the good news is that if you've been debating getting a tattoo removed for a few years, procrastinating may actually make the process a lot easier. "Older tattoos are often easier to remove than newer ones," cosmetic dermatologist Dr. Michele Green explains to Elite Daily. "Lasers today can pick up multiple color variations of a tattoo; however, black ink is often the most responsive."

But once you've made the decision to say goodbye to your unwanted ink, what happens when you're actually in the chair? Of course, the experience varies depending on the person. But anyone looking to get a tattoo removed definitely needs to have a lot of patience.

"The entire process generally takes at least a year," Dr. Arash Akhavan of The Dermatology & Laser Group says. "Depending on which laser is used, the number of treatments varies. With new technology, such as the PicoSure laser, which we use here in office, it's possible to remove a black tattoo on light skin in as little as five laser sessions, done eight weeks apart."

But what about those with dark skin? For many with deeper skin tones, there is always a worry that permanent scarring will occur from treatments. Sadly, the truth is that not all lasers were made with people of all complexions in mind. However, both Dr. Green and Dr. Akhavan use specialized lasers that work universally. Dr. Green opts for Alex TriVantage, which she says "works on all skin types, regardless of skin color," while Dr. Akhavan claims PicoSure is a safe option as well.

Depending on the size of the tattoo being treated, each session can last anywhere from 15 to 45 minutes, according to the Carolina Laser and Cosmetic Center in North Carolina. And if you're thinking to yourself, "There's no way you could be in pain for that long," the truth is, it doesn't always need to be a painful process. Dr. Akhavan shares that, at his clinic, each time a patient comes in, the area is numbed with both a topical cream and injected lidocaine before the procedure begins. "We make the entire process completely painless, though tattoo removal is known to be extremely uncomfortable without these agents," he says.

Getting a treatment done at the dermatologist's office isn't the end of the road when it comes to tattoo removal, as following aftercare instructions once you get home is just as important. New Look Laser Tattoo Removal in Houston suggests keeping the area clean by gently washing it every day, then placing a dressing over the tattoo to avoid friction. You will also need to apply a number of ointments to the skin on a daily basis to help speed up the healing process, and avoid the possible risk of infection.

But while the road to getting rid of a tattoo in its entirety is certainly long, Dr. Green warns that no one should enter the process expecting the skin to appear brand new once all the treatments have been completed. "Results cannot be guaranteed as the age and coloring of the tattoo can affect the treatment outcome," she says. "Removing a tattoo depends on the size and also the quality of the ink."

Still, fingers crossed for anyone trying to get rid of an unwanted tattoo that the results are exactly what they were aiming for.