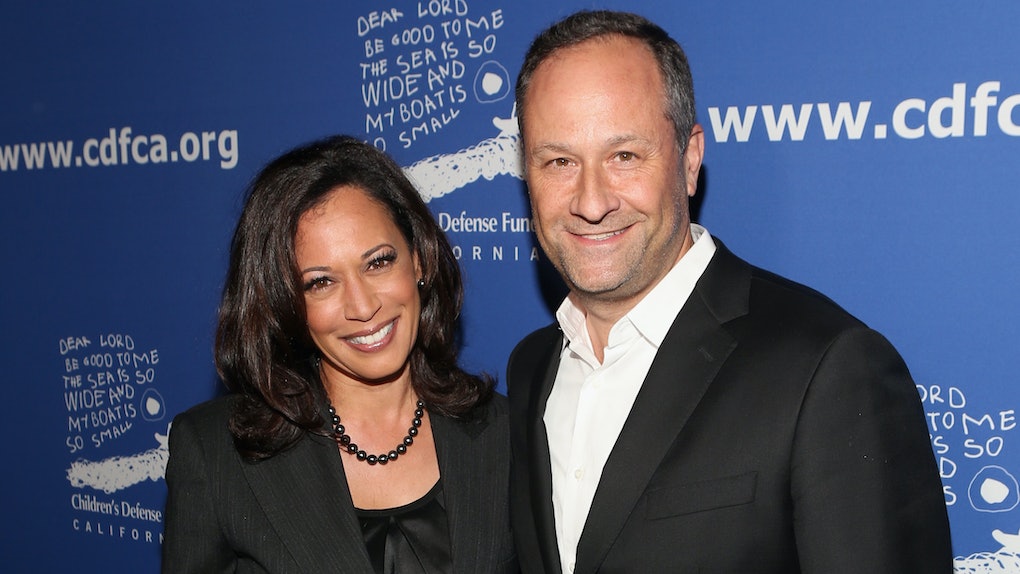 How Did Kamala Harris & Doug Emhoff Meet? It's A Cute Story

Time and time again, Kamala Harris and Doug Emhoff have proven that they are one of the sweetest couples in politics. You might have seen Emhoff cheering on his wife from the sidelines during campaign events, or caught their adorable social media posts for each other's birthday. But there's so much more to love about this duo — and aside from the fact that they could be the first-ever female vice president and second gentleman, their love story is actually super relatable. So, how did Kamala Harris and Doug Emhoff meet? If you've never heard the tale of this whirlwind romance, you're in for a real treat.

It all started in 2013, when Harris was serving as California's Attorney General. When a friend of Emhoff's, PR consultant Chrisette Hudlin, brought up Harris' name, he mentioned that he had recently met her at an event. As Hudlin recalled to Marie Claire, he said something to the effect of, "She's really hot."

"He was complimenting her, and at the same time he was admiring her, and I liked that," Hudlin told the magazine. "I thought, 'Oh, what’s your deal?'”

Well, it just so happened that Hudlin was a mutual friend of Harris', too. So, suddenly inspired to play matchmaker after that interaction, she decided to give Harris' phone number to Emhoff. Meanwhile, she sang Emhoff's praises to Harris, saying: "He's cute and he's the managing partner of his law firm and I think you're going to like him." And when Emhoff sent Harris a text while he was at a Lakers game, Harris adorably replied "Go Lakers!" — even though she's a Warriors fan.

It keeps getting cuter, y'all. Before they actually met up IRL, Emhoff reportedly left her an awkward, rambling voicemail before their first date — which he was convinced must've ruined his chances. Fortunately, Harris found so endearing that she saved it and still replays to this day on their anniversary. After listening to the voicemail, she called him back and they spent a full hour talking. (What I wouldn't give to have been a fly on the wall for that convo.)

When they finally did meet in person, the sparks must've been flying — because Emhoff described their blind date as "love at first sight" in an Instagram post for Harris' birthday. He was so smitten, in fact, that the morning after their date he emailed Harris with a list of all the dates he was free for the next couple of months. In her 2019 memoir The Truths We Hold, Harris revealed that the email read: "I'm too old to play games or hide the ball. I really like you, and I want to see if we can make this work." "We've been making it work ever since," Harris added in a recent Instagram post re-telling this story.

Harris made their relationship public while giving a speech about truancy — which she admitted in her memoir is "not exactly what most people think of as a romantic date. Still, it seems fitting for a couple who's anything but ordinary.

Less than a year after that first date, Emhoff and Harris were casually discussing what takeout dishes to order when Emhoff suddenly said: "I want to spend my life with you." Harris wasn't registering what he was getting at, though. So, she responded, "That's nice, honey. Should we have chicken or shrimp on the pad Thai?" At that point, Emhoff dropped to one knee in the middle of Harris' apartment, presented a "round, simple" diamond and platinum engagement ring, and repeated, "No, I want to spend my life with you." This time, she got it — and fortunately, she felt the same way. They were married in a courthouse ceremony just four months later, on Aug. 22, 2014.

The ceremony, which was presided over by Harris' sister Maya, included music played by a live cellist and a reading from Maya Angelou's poem "Touched by an Angel." Harris wore a pale gold dress, and they each honored the other's cultural heritage — with Emhoff wearing a floral garland around his neck (an Indian wedding tradition) and stomping on a glass at the end of the services (as is customary in Jewish weddings). The couple wrote their own vows (naturally, with the help of Harris), and according to The San Francisco Chronicle, their first dance was to Corinne Bailey Rae's "Like a Star."

Prior to meeting Harris, Emhoff has been previously married to Kerstin Mackin, with whom he shares two children — Cole (now 26) and Ella (now 21). Remarkably, Harris calls Mackin a "close friend." In fact, according to People, Mackin was so taken by Harris that she volunteered to help out with Harris' presidential bid before that campaign ended in 2019. Harris didn't just have Emhoff's ex-wife to win over, though — there were his kids, too. In her memoir, Harris recounted how she picked up a tin of cookies and tied a ribbon bow around them before meeting them for the first time — a gesture she worried might be "too much." Apparently, she totally won them over — although they didn't like the term stepmom, so they started calling her "Momala."

These days, Emhoff says they still make an effort to keep the spark alive, even on the campaign trail — although he admits that "date night definitely looks a little different these days." Their secret to marital bliss? "Enjoying whatever time" they have together, and "always with a sense of humor." Oh, and decompressing with the "90-minute cute rom-com" on Netflix. See what I meant about relatable?

Whether Emhoff is giving Harris a masked post-debate kiss, posting encouraging messages for her on Insta, or proudly rocking a phone case and a hoodie with his wife's name on it, he always manages to epitomize #husbandgoals. He's even been known to fend off protestors who try to steal the mic from her during a speech (*swoon*). Harris, meanwhile, can't stop gushing about her hubs, who she calls her "best friend" and her "biggest supporter." "I could not imagine anyone else I'd rather be with on this journey," she wrote in an Oct. 13 birthday tribute to Emhoff.

Aug. 22, 2020, marked six years since they tied the knot, and in an Instagram anniversary post, Emhoff wrote of their "beautiful life together" that he "wouldn’t change a thing."

TBH, me neither. Looking forward to seeing what other sweet moments and savage accomplishments this couple achieves in the years to come.

More like this
Who Is Ella Emhoff Dating? She's Reportedly Hanging Out With A 'GQ' Editor
By Corinne Sullivan
Clare Crawley's Tweet About Matt James Reportedly Dating Grace Amerling Is Shady
By Candice Jalili
Travis Barker's Instagram About Sex With Kourtney Kardashian Will Make You Blush
By Candice Jalili
Stay up to date