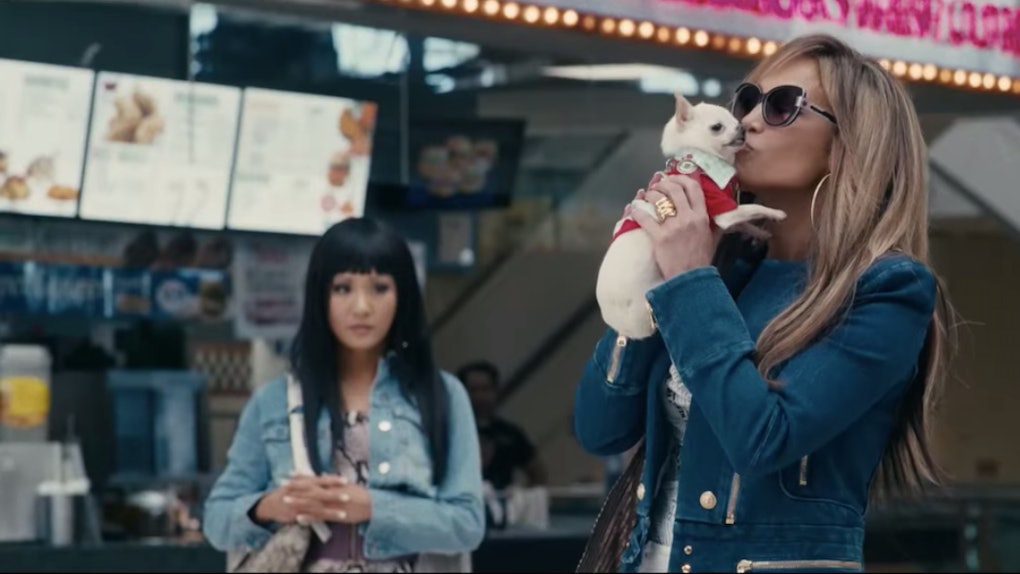 How Accurate Is 'Hustlers'? The True Story Is Just As Wild As The Movie

The long-awaited stripper scam movie Hustlers has finally hit theaters, and from the sound of it, fans think it's totally living up to all the hype that's been built up ahead of its release. Starring Jennifer Lopez, Constance Wu, and so many more famous faces, the movie tells the story of a group of savvy exotic dancers who hoodwink wealthy men to make money, and some viewers may be surprised to hear the movie is actually inspired by a true story. So, how accurate is Hustlers? It sounds like there are some major parallels between fact and fiction.

The movie, which debuted on Sept. 13, is based on the 2015 New York magazine article by Jessica Pressler called "The Hustlers at Scores." For the article, Pressler interviewed former stripper Roselyn "Rosie" Keo and her former coworker Samantha Barbash (who goes by Samantha Foxx) about their alleged scheme in which they would, well, hustle dudes out of thousands of dollars by flirting with them, allegedly drugging them, and allegedly charging exorbitant amounts on their credit cards. Though Keo later went back on what she said in her interview with Pressler, telling a fact-checker that she had made everything in the article up, Pressler confirmed the story had been "corroborated by multiple indictments and interviews."

Lorene Scafaria, who wrote and directed Hustlers, decided she wanted to base the movie not on official court documents, but on Pressler's story specifically. "I thought that Jessica and Rosie’s relationship was incredibly interesting — the relationship between a storyteller and their subject,” Scafaria said in an interview with TIME. So while it's hard to say exactly which tiny moments occurred in real life, it appears the movie remains quite faithful to Pressler's article.

First, let's break down the characters: Ramona (played by the extraordinary Lopez) is based on Barbash, while Destiny (Wu) is based on Keo. Mercedes (Keke Palmer) and Annabelle (Lili Reinhart) were inspired by Rosen and Pascucci. Music megastars Cardi B, Lizzo, and Usher all make appearances as well, but it's not clear if their characters directly correlate with anyone from the true story.

Beyond the main premise of the movie, there are tons of details in Hustlers that jibe with what was reported in real life. Many of the characters' backgrounds reflect the backgrounds of the people on which they're based. In the movie, Destiny living with her grandmother is a main part of her storyline, and Keo (the real-life Destiny) did in fact live with her grandmother after her parents moved away. Hustlers even got smaller things right, like the fact that Keo's nicknames for herself and Barbash really were "Kobe and Shaq."

The movie also reportedly nailed how the actual scheme went down. According to Pressler's article, the women would pick wealthy guys and arrange for someone in their group to meet up with them and to get them drunk, often allegedly involving drugs as well. Then, they'd take them to strip clubs and allegedly charge thousands of dollars to their credit cards. According to the New York Times, the way they were busted in the film also lines up with the real-life story, in that multiple men sparked investigations by coming forward with complaints about sky-high credit card bills from nights they didn't remember. Also, in the movie, one of Ramona's girls, Dawn (Madeline Brewer), ratted out the group when she was picked up by authorities, and in reality, Pressler's article said an anonymous woman involved in the scheme turned into an informant when authorities got ahold of her. Plus, according to Vanity Fair, Barbash really was arrested while at the ATM, as portrayed in JLo's instantly-iconic scene.

Of course, as with any kind of blockbuster movie based on a true story, there were some embellishments. Namely, when Destiny took the plea deal in the movie, it happened right after they were arrested, and she told Ramona in person. However, according to Pressler's story, when Keo took the plea deal, Ramona simply texted her saying, "We heard you took a deal. Good luck." Clearly, the less-than-dramatic exchange had to be swapped out for a more emotional moment between the two women. It can also be assumed many of the movie's smaller beats and much of the character dialogue was not what was said in real life verbatim.

Regardless of how closely (or not) the movie portrays what happened in real life, not everyone is thrilled about Hustlers. While Keo has been actively supporting the film, Barbash said in April that she plans to sue the production company behind Hustlers, STX Entertainment, as well as J. Lo for defamation of character. “We’re putting a stop to it because she’s actually misrepresenting me,” Barbash said about J. Lo to the New York Post. “I was never a stripper. It’s defamation of character.” She also claimed to Page Six in early September that the people behind the movie never secured the rights to her life story. Elite Daily reached out to Lopez and STX for comment but did not hear back by the time of publication.

Both Keo and Barbash will be coming out with their own books based on their experiences. Keo's book, The Sophisticated Hustler, is available for pre-sale now, while Barbash's Underscore is expected next month, according to Page Six. Hopefully these projects helps fans see how multiple sides of the story come together to form a more complete picture of this wild con.

Hustlers is in theaters everywhere.

More like this
Marvel's Video Announcing A 'Fantastic Four' Movie Has Fans Going Wild
By Dylan Kickham
Netflix's Summer 2021 Movie Release Schedule Will Keep You So Busy
By Abby Monteil
The First 'West Side Story' Remake Teaser Is Here & BRB, I'm Crying
By Abby Monteil
Stay up to date