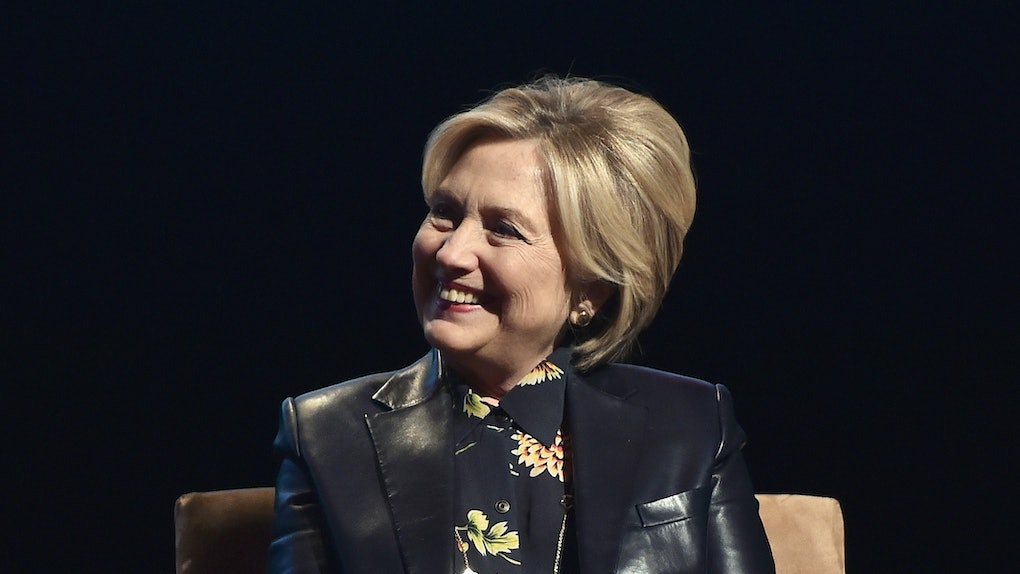 Donald Trump is pretty clear about where he thinks the loyalties of the people around him are. If you’re not with him, you’re against him — and that means any criticism, or questioning of his actions, makes you his new enemy. (It means he has a lot of enemies.) Honestly, it gets kind of exhausting. Which is why Hillary Clinton’s retweet criticizing Trump’s feud with the FBI is so perfect.

On Dec. 28, Clinton retweeted, without comment, a post by Lawrence Tribe, a professor of constitutional law at Harvard University. The tweet basically called out the president’s assertions that the FBI is biased against him, and it didn’t bother to be subtle about it. It called the idea that the FBI somehow has it out for Trump “totally crazy,” and referenced the fact that now former-FBI Director James Comey actually took heat for supposedly costing Clinton the election (to Trump's obvious benefit). It read,

Retweet if you agree it’s totally crazy to suggest that the FBI — having helped sink Hillary’s campaign by revealing that she was under investigation while concealing that Trump was being investigated — has secretly been anti-Trump all along.

The part that really gets me? That “retweet if you agree.” Clearly, Clinton (and about 21,000 others) did.

OK, I'm not going to go as far as call this shade, because it's actually kind of blatant, but the subtle retweet is still pretty good. Slow clap.

If Clinton is rolling her eyes at Trump's assertions that the FBI is biased against him, she has good reason.

On Oct. 28 2016, less than two weeks before the presidential election, Comey released a letter saying that the FBI was reopening an investigation into whether Clinton had misused her email while serving as Secretary of State — an 11th-hour announcement that Clinton has said she thinks cost her the election. "I think every day that goes by, the evidence of that becomes clearer," she said in an October interview.

Nevertheless, for weeks President Trump has been accusing the FBI of bias against him. In recent days, Trump has tweeted out insinuations that FBI Deputy Director Andrew McCabe was bribed by Clinton, as well as shots at Comey, who Trump himself fired back in May. He also called the FBI "tainted" in reference to the investigation into possible collusion between Trump's presidential campaign and Russia another tweet.

The accusations seem to have amped up in the weeks since Trump's former national security adviser Michael Flynn pleaded guilty to lying to the FBI and revealed that he was cooperating with the Russia investigation. The investigation has long been a sore point for Trump: he has referred to it as a "witch hunt," and frequently questions why the investigation isn't focusing on Hillary Clinton instead.

Clinton isn't the only one raising a skeptical eyebrow. While Trump's former campaign manager, Michael Caputo, said in a recent interview that the president's tweets were meant to defend against bias by the FBI, not everyone saw it that way. Richard Painter, a top ethics lawyer under President George W. Bush, said that the tweets about McCabe could be considered an attempt to intimidate a witness in the investigation into possible Russian collusion. "But [the tweets do] make Mr. Mueller’s job easier and that’s a nice thing to do," Painter wrote in a tweet, referring to special counsel Robert Muller, who is leading the investigation. "Merry Christmas!"

And a Happy New Year as well. At least it probably is for Hillary Clinton, who I hope is sitting back with a nice glass of bubbly and watching this unfold from afar. After all, there's nothing more enjoyable than watching an old enemy deal with all the drama they brought down on themselves. Cheers.

More like this
These Tweets & Memes About Matt Gaetz's Venmo All Make The Same Joke
By Cianna Garrison
The More Contagious B-117 COVID Variant Is Now The Most Common Strain In The U.S.
By Rhyma Castillo
These Funny Emoji Combos On TikTok Are Perfect For When Words Just Won't Cut It
By Lara Walsh
Stay up to date