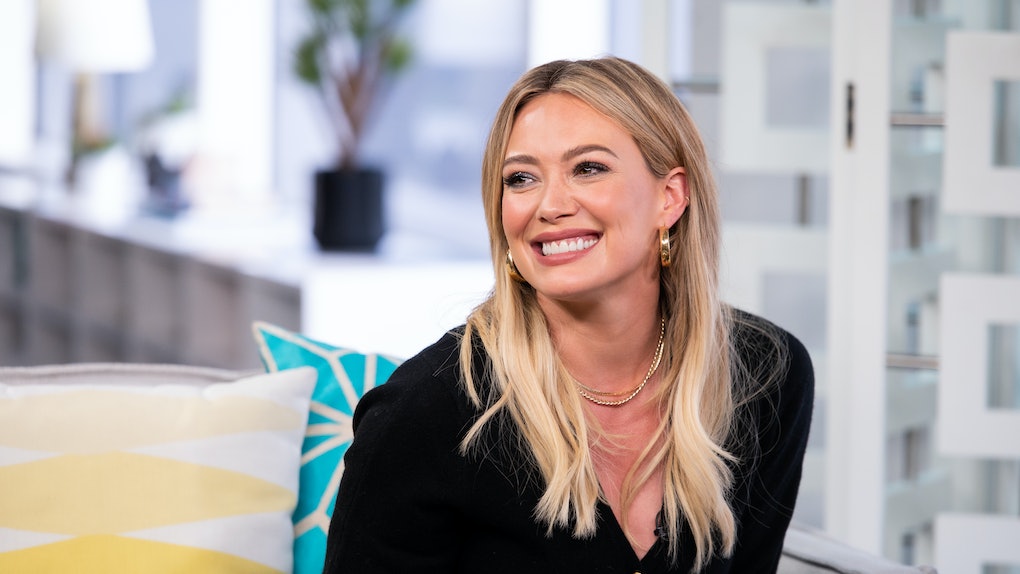 Months after confirming that a Lizzie McGuire reboot is in the works, the show's leading lady appeared to suggest that the revival might have an all new soundtrack when it's released in 2020. It's been four years since Hilary Duff released her fifth studio album Breathe In. Breathe Out back in 2015, but it looks like that all could be about to change. Get excited, because Hilary Duff’s Instagram post in the studio shows that she's working on some music with fiancé Matthew Koma.

On Saturday, Dec. 14, the actress spurred speculation that the upcoming Lizzie McGuire revival would have some new music when she took to Instagram to share a photo of her in a recording studio. In the photo, the Younger star can be seen wearing headphones along with Koma (who's also a musician and wrote and produced several tracks on Duff's last album). Duff captioned the photo with emojis of a microphone and headphones. While the singer didn't specify whether she was recording new music for the show or just playing around, her followers quickly flooded the comments section with their ideas for songs. Fans might remember that the last thing Duff recorded was a cover of Fleetwood Mac's "Little Lies" for her show Younger back in 2016, so it's exciting news either way that the singer is back in the recording studio.

While there's no official release date yet for the Lizzie McGuire reboot, Duff previously confirmed that viewers can expect a good mix of nostalgic elements and familiar characters with a brand new storyline as the show's leading lady navigates life in her 30s.

"I think it’s going to be a really good mix of giving everyone what they want from the show in the past, and also a new fresh show and her at 30, which looks completely different," she previously told Us Weekly. "I feel so connected to her obviously from the past, so it’s been really fun to be a part of the whole creative process as well."

While the star has hinted at plenty of new developments, viewers can expect plenty of familiar faces when the reboot happens, including Gordo, Ethan Craft, and all the members of the McGuire family.

"Everyone knows the family's coming back. I filmed with them all this week, and it's a trip, it's crazy," Duff told Elle back in November, adding that the showrunners were working to preserve some of the nostalgic parts of the original series while making it an all-new experience for fans. "We want the show to be able to stand alone and not be just a full extension of the one that was almost over 15 years ago. We want it to feel fresh but also serve up some nostalgia."

Only time will tell whether Lizzie will be with her spaghetti-loving crush Ethan or will have made things romantic with her former BFF Gordo when the Lizzie McGuire reboot airs, but at least there's a pretty high chance that we'll have some great new music to sing along to when the new series comes out next year.