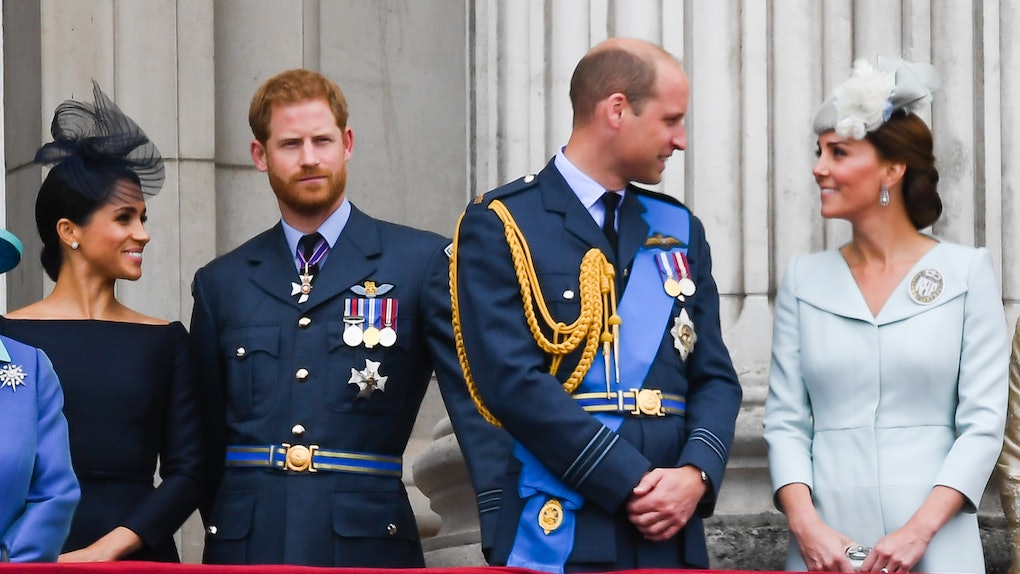 There are very few people who don't have some type of family drama. Big or small, family drama really is something most people face — though, not all of us have it splashed across the internet every day. That's why the royal family deserves a break, and why Meghan, Harry, William, and Kate's reported distance is NBD.

Rumors of a rift between the four royals have flooded the internet for a while now, and only intensified after their 2019 Remembrance Day appearance earlier this month. According to onlookers, the four appeared to be distant with one another. However, a source for People insists that this whole situation is getting blown out of proportion.

“Everyone was doing their duties, doing what they needed to do on behalf of the family — and that was that,” the source shared. “But there is a divide between the four of them. It’s hard for people to digest, because everyone wants them to be such a unit.” Kensington and Buckingham Palace did not respond to Elite Daily's request for comment on the report.

The source added there's one unavoidable reason that the two brothers are seemingly distant sometimes.

“William is the future King. There is going to be some competitiveness between him and Harry,” says the source. “That already puts a rock in the relationship.” Makes sense, right?

This all comes after Meghan and Harry announced they would not be spending the holiday with the royal family, which only sparked more rumors of a feud. However, a separate royal source insists that any change in the brothers’ relationship is simply caused by their new chapters in life.

“As is often the case in any family, when one of your siblings gets married, there’s always a period of readjustment,” said the source.

After the death of their mother, Princess Diana, in 1997, the two brothers were thrown together by the tragedy of their childhood. But it’s inevitable, as they grow up and develop different personalities, that synchronicity won’t apply anymore.

As we head into the holiday season, Meghan, Harry, William, and Kate will undeniably have more public appearances together, but, of course, will put any differences aside.

“They’re going to have to try to figure out how to be civil, but they are on different paths now,” says the source. “It’s just the reality of the situation.”

It sounds like, no matter how different the paths these two couples take are, they'll always come together and be cordial when it matters most because of the basic respect they have for one another, just like a normal family.

More like this
Here's Why Meghan Markle Reportedly Isn't Attending Prince Philip's Funeral
By Cianna Garrison
Are Meghan & Harry Getting Paid For Their Netflix Show? Here's The Deal
By Sydney N. Sweeney
When Are Ariana Grande & Dalton Gomez Getting Married? Here's The Reported Tea
By Corinne Sullivan
Stay up to date