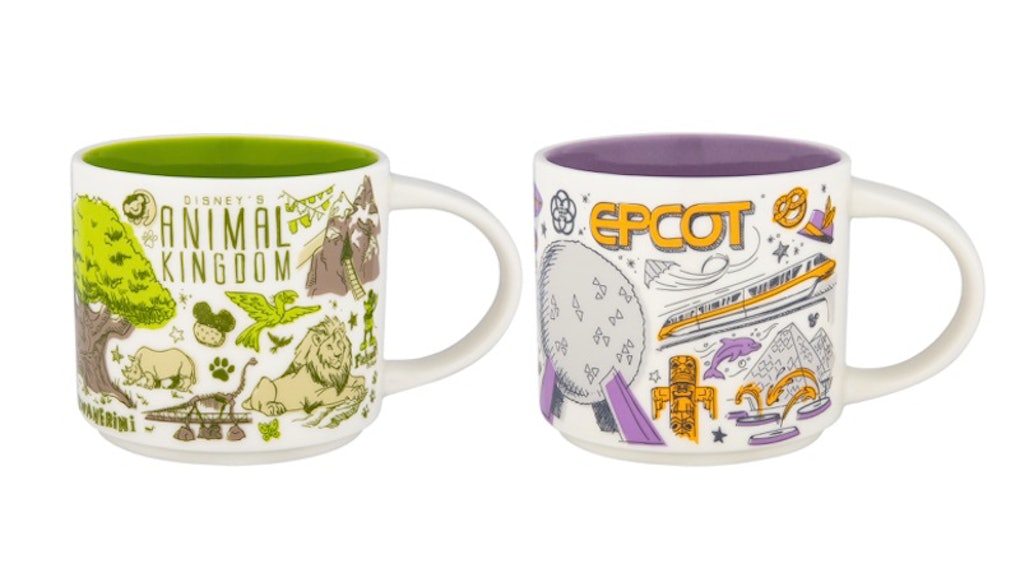 In case you didn't know (which, you probably didn't), I collect coffee mugs. In fact, my kitchen cabinets are filled to the brim with mugs from different cities that I've visited, and I have my eyes on Starbucks' newest collection. The coffee company is currently selling Disney "Been There" mugs, which feature vintage designs inspired by various Disney theme parks. There are six versions available, and they all look pretty dang magical. If you're wondering where to get Starbucks x Disney mugs (same), you might want to consider booking a vacay.

I say that because you won't be able to find the Disney "Been There" mugs at your local coffee shop. According to Starbucks, these gems are only available at Disney parks, so start planning your trip. However, once you're officially on vacation, you might have to hop from park to park in order to score all of the mugs. As People points out, an external Disney blog called AllEars.net shared that the mugs can only be found at the Disney parks that they were inspired by. For instance, the Epcot-themed mug can only be found at Epcot, while the Magic Kingdom-themed mug can only be found at Magic Kingdom. You get the point, though.

Considering the collection's name, that makes total sense. To score a "Been There" mug, you have to "be there."

The blog didn't reveal the exact locations of the remaining mugs (California Adventure, Hollywood Studios, and Disneyland), so you'll have to seek those out during your trips. In order to do so, just find the Starbucks location inside of the park that you're visiting.

Now that you know where to find these mugs, you're probably curious about their designs. As you can see, each mug features artwork that's inspired by the particular park that it's found in. For instance, the Magic Kingdom mug has a drawing of the Cinderella Castle on it, along with Tinker Bell, Mickey ears, Dumbo, and more. The Epcot mug, on the other hand, boasts drawings of Epcot's Spaceship Earth structure, various worldwide landmarks, and the Walt Disney World Monorail System.

By drinking out of these mugs, you'll be able to reminisce your Disney vacay and feel the wanderlust all over again.

If you want to buy one (or all) of these mugs during your Disney escapades, then bring at least $20 with you to Starbucks. According to the company, each "Be There" mug costs $19.99 — but I'm sure you'll want to grab a latte during your visit (I know I would).

More like this
What Is Taco Bell's Times Square Digital Cantina? It's A Unique Experience
By Lara Walsh
Smirnoff's Summer Of 2,021 Dreams Giveaway Includes Free Flights & Bucket List Experiences
By Lara Walsh
Here's How To Play Starbucks' Earth Month Game For A Chance At Freebies & Discounts
By Cianna Garrison
Stay up to date