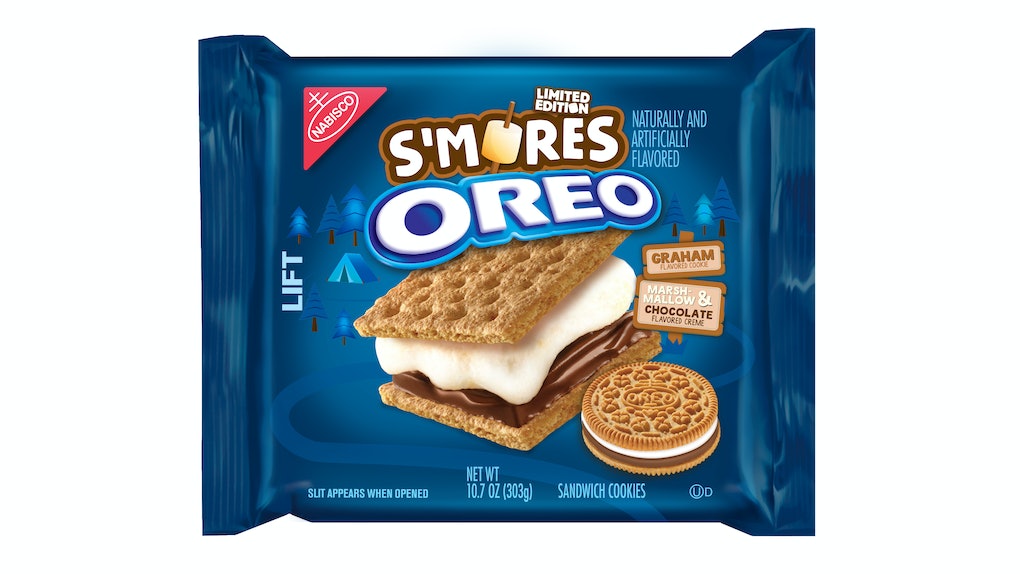 Even before summer officially begins, Oreo is coming in hot with some good news for cookie fans everywhere: the return of S'mores Oreo cookies. While the S'mores-flavored Oreos might not be a brand new flavor of the iconic sweet, they are a limited-time treat, so their return is greatly appreciated. Since the brand officially announced the cookies are back on shelves as of Monday, May 13, so you might be wondering if they're sitting in your local grocery store. Once you know where to get S'mores-flavored Oreo cookies, you can stock up to enjoy them all summer long.

First, let's talk about what makes a S'mores Oreo cookie. This isn't a case of the company just throwing a different colored creme filling between two of the iconic chocolate wafers. Per the brand, the S'mores Oreo starts with two graham-flavored cookies, and then — similar to the s'mores you stack by a bonfire — it's filled with a layer of marshmallow-flavored creme and a layer of chocolate-flavored creme. TBH, it sounds like it has all the makings of the classic summer dessert, and you can find it ready to go in your local grocery store.

According to Oreo, the S'mores Oreos can be found anywhere Oreo cookies are sold nationwide. So, you won't have to waste time hunting for the S'mores-flavored Oreos, which means you can spend more time chowing down.

Since the S'mores Oreos are being released more than a month before the official start of summer, you might also be curious how long they'll stick around. According to Oreo the S'mores-flavored rendition of the classic cookie will only be around for a limited time. With no hard end date to go on, I'd pick up a few packages sooner rather than later.

I totally get it if you'll bum hard when the S'mores Oreos do eventually leave store shelves, but Oreo has quite a few tasty offerings coming your way this summer. Most of them are also limited-time flavors, but there is one joining the Oreo lineup as a new permanent flavor. New Latte-flavored Oreo Thins will hit shelves in June, and they will be around for good (!!!). With a latte-flavored cream sandwiched between two "thin and crispy" Oreo cookies, you might just switch out your morning cuppa for an early dessert.

Along with the returning S'mores-flavored Oreos and brand new Latte Thins, Oreo is also bringing a Marshmallow Moon-flavored Oreo cookies to stores to celebrate 50 years since the Apollo lunar landing on July 20, 1969. The limited-edition cookie will feature a purple marshmallow cream sandwiched between one of three different moon-landing designs on the cookies. Per Oreo, look for the special glow-in-the-dark packaging to hit shelves in the middle of June, which is about a month after the return of the S'mores.

The Marshmallow Moon Oreos aren't even the end of the brand's summer releases, though. By mid-July, you'll see packages of limited-edition Baskin-Robbins Mint Chocolate Chip-flavored Oreo cookies on shelves, and you can bite into the treat that has both mint-flavored and chocolate-flavored cremes dotted with chocolate chips.

When it comes to filling up the cookie jar this summer, Oreo is making sure you have no shortage of flavors from which to choose. IDK about you, but I'm going to stock up on the limited-time flavors, so I can enjoy all my faves well into fall.