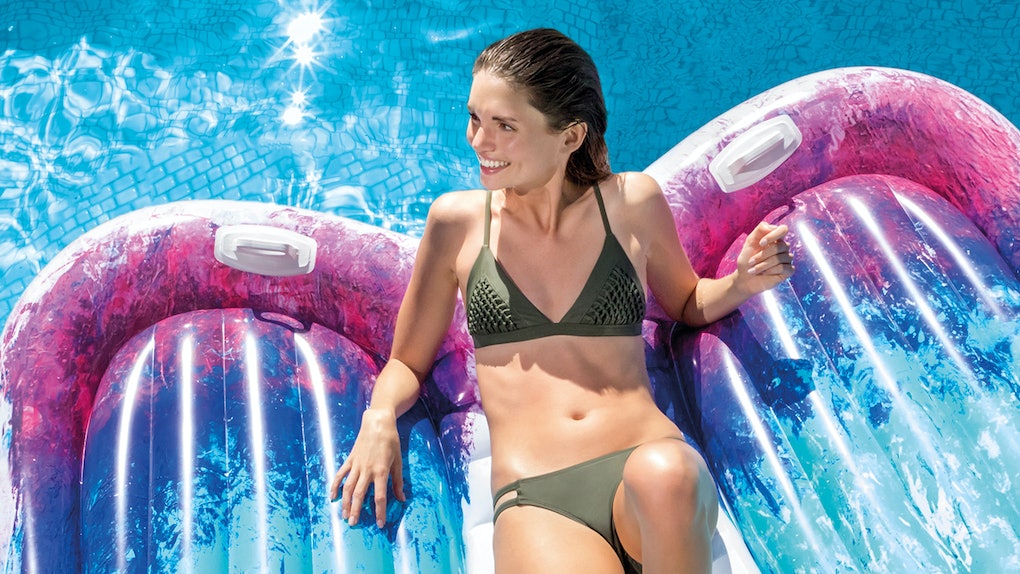 OK, call me basic, but there are two types of Instagram selfies that pretty much guarantee likes: One takes place in front of angel wings painted on a wall, and the other takes place atop a highly photogenic pool float. And just in time for summer, one brand has released a new product that literally allows you to take both pictures at the same time. Yes, you guessed it — an angel wings pool float now exists. So, if you want to take some fire summer selfies this year, here's where to get an Angel Wings Mat pool float. IDK about you, but I am seriously obsessed.

If you've never heard of Intex, it's a brand widely known for their above-ground pools, airbeds, and inflatable hot tubs. But they just added the pool float of my wildest Instagrammin' dreams to their aquatic lineup for spring and summer 2019, called the Angel Wings Pool Mat. TBH it's so freakin' cute.

The Angel Wings Pool Mat first became available online and in stores (like at Walmart and at Bed Bath and Beyond) in the southern part of the U.S. in early March 2019. A month later, it's made its way to stores up north (also at Walmart and Bed Bath and Beyond) as of early April 2019. Honestly, I need to get my hands on one ASAP, and between you and me, I already have three in my online shopping cart. Don't tell my bank account.

OK, for real, though — how cute are these? I am seriously in love with the ombré colors, and the giant, majestic shape. And once I've taken about as many pics as I possibly can, it still looks comfortable as heck. Between its gorgeous aesthetic and maximum comfortability, it really emulates everything I could possibly want in one poolside product.

Anyway, if you aren't ready to drop $30 right now, don't worry about it — the Angel Wings Pool Mat isn't limited edition. However, it looks like they're selling quickly. Walmart's website says there's only two left, and while I'm not sure if that's only referring to my nearest Walmart, it definitely shows that they are in relatively high demand. Plus, you want to be ahead of the game and be one of the first to get your hands on it. There's only room for so many angel wings in one Instagram feed, right? Luckily, the Pool Supplies Superstore website appears to have orders that will ship out on April 9, so you should received it long before your summer vacay! And Academy Sports + Outdoors looks to have orders that as of publication will arrive between April 11 and April 15.

The Angel Wings Pool Mat actually has a relatively cool back story. According to Intex, it's licensed from Colette Miller’s Global Angel Wings Project. It's directly based on the angel wings murals that went up around various cities back in 2012, that you've probably photographed in Los Angeles, Australia, or Mexico. It simply aims to remind people that we are the angels of the earth.

There's a lot to get excited about with Intex's latest and greatest addition to their pool accessory lineup. The Angel Wings Pool Mat is super cute, and it looks hella comfortable. There's no doubt in my mind this will be a pool party staple this summer, so get your sunnies out and your sunscreen ready. Oh, and get ready to smile for the camera. If you ask me, this pool float was basically made for Instagram.