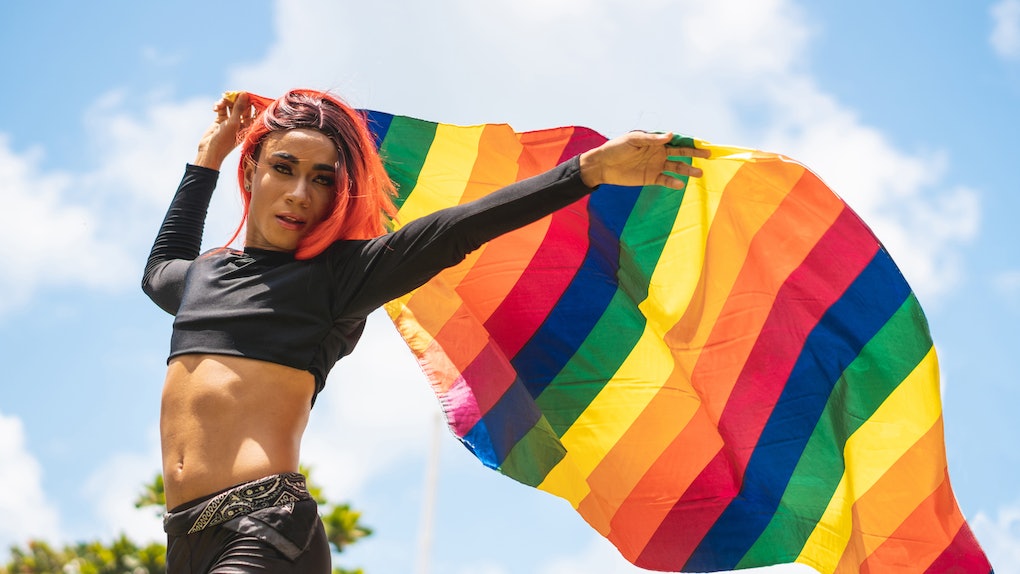 Here's Where To Donate To Support The Black Trans Community

The recent killings of Black Americans George Floyd, Ahmaud Arbery, Breonna Taylor, Tony McDade, Dion Johnson, Dreasjon "Sean" Reed, Manuel Ellis, and Maurice Gordon have motivated people everywhere to protest systemic racism. Of course, not all Black people have the same needs, and some Black communities — such as the Black trans community — could use additional support.

According to the Human Rights Campaign (HRC), 91% of trans individuals murdered in the U.S. in 2019 were Black trans women. As well as Tony McDade, other Black trans women killed in 2020 so far include Monika Diamond, Lexi, and Nina Pop. Members of the Black trans community oftentimes lack legal protection, healthcare, and identifying documents, and instead of offering aid, some people — such as Harry Potter author JK Rowling — continue to express harmful transphobic views. The Black trans community needs financial and structural support now more than ever, and donating to these 12 organizations is a great way to make a difference. We'll continue updating this list as we become aware of more organizations.

Founded in 2004, the Transgender Gender-Variant & Intersex Justice Project (TGI Justice Project or TGIJP) is a San Francisco-based nonprofit committed to ending human rights abuses against transgender, intersex, and gender-variant people. The organization is particularly dedicated to supporting low-income trans women of color who are in California prisons and detention centers or who were formerly incarcerated. Donating to TGIJP offers political education to Black trans leaders and helps community members secure housing, long-term employment, and legal support.

The Black Trans Advocacy Coalition (BTAC) was established in 2011 to improve the daily lives of Black trans people. The organization works with the national advocacy center and affiliate state chapters to abolish discrimination and inequities faced by the Black trans community in health, employment, housing, and education. BTAC's work involves community education, public policy initiatives, empowerment programs, and direct services, and donating to BTAC allows them to continue that work.

Established in 2019, For The Gworls works to provide the Black trans community with rent assistance and funds for gender-affirming surgeries. Donating to For The Gworls can help reduce homelessness rates in the Black transgender community and decrease the cost of expensive affirmative surgeries. The collective also started a fund to help subsidize the cost of copays for medical treatments for Black trans people, as well as providing transportation to and from medical facilities.

The Trans Women of Color Collective (TWOCC) was created in 2013 to cultivate economic opportunities and affirming spaces for trans women of color. As well as helping to provide spaces for trans women of color to engage in healing and restorative justice, donating to the TWOCC's Survival Fund offers direct aid to the community by providing food, transportation, hygiene products, and clothing.

Founded in 2013, the Solutions Not Punishment Collaborative (SNaPCo) is a Black trans and queer-led organization based in Atlanta, which is dedicated to providing the Black trans community with the opportunity to thrive. SNaPCo donations go towards the Taking Care Of Our Own Fund, which provides emergency funds for community members, and the SNaP4Freedom School, a peer-led program designed to provide political education and leadership practices.

The Black Trans Travel Fund is a mutual-aid project launched in 2019 to provide Black transgender women in New York and New Jersey with financial resources to pay for safer modes of transportation, such as car services. Donating to the Black Trans Travel Fund (which hopes to expand to other states eventually) allows women in the Black trans community to travel without fear of harassment or violence.

Based in Pittsburgh, Pennsylvania, SiSTers PGH is a Black trans-led transgender community center dedicated to providing supportive services and shelter to Allegheny County's trans and nonbinary communities. As well as functioning as a safe space, the community center (which was established in 2013) offers everything from food and clothing to health referrals and employment assistance, and donating to SiSTers PGH helps fund those resources.

While it will take some time to remedy the disadvantages of the Black trans community, donating to these causes and organizations is certainly a step in the right direction.