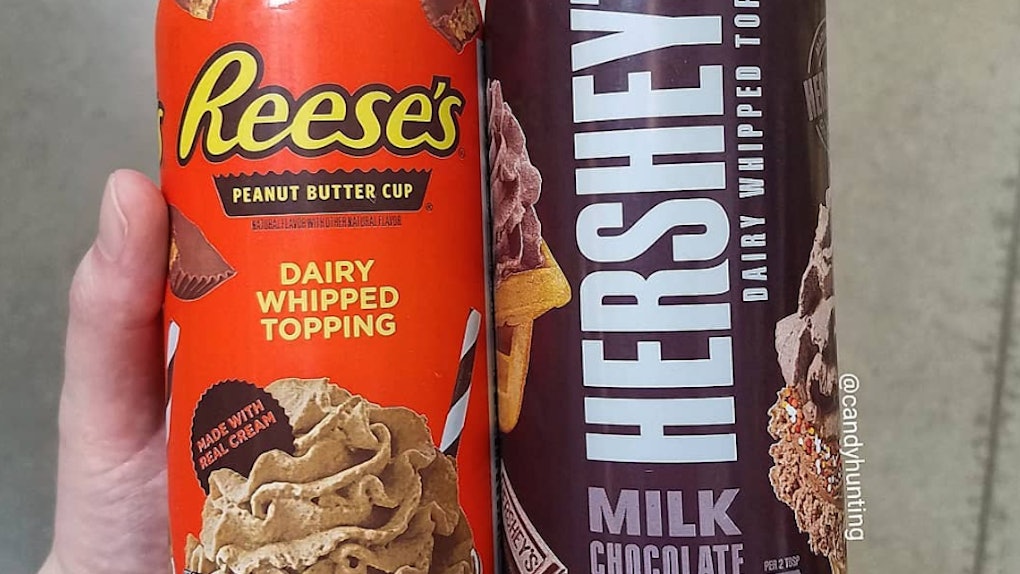 While I don't really need an excuse to enjoy an ice cream sundae, you could make the case that a big bowl of the frozen stuff is the best way to beat the summer heat. Of course, no ice cream dessert is complete without whipped cream, right? Well, get ready for a chocolaty twist on your favorite whipped topping, because candy-flavored cans of the sweet stuff have been spotted. Here's where to buy Reese's and Hershey's whipped cream for the ultimate sundae this season.

According to Spoon University, the candy-flavored whipped cream of your dreams was located at Hy-Vee supermarkets by @candyhuting on Instagram. The photo of the two cans of whipped cream was posted to the @candyhunting account on Monday, July 16, with the caption,

Next stop: My mouth. 😍 Found the new Reese's and Hershey's whipped creams at Hy-Vee!

I've never agreed with a caption more in my life than when this one suggested a straight shot of the stuff. The photo of the whipped cream cans shows an orange-capped Reese's can with the same hue of the iconic Reese's packaging, and it's labeled as "Reese's Peanut Butter Cup Dairy Whipped Topping." I'll admit that's a mouthful for what I will probably call "Reese's Whipped Cream," but the picture on the can of the perfectly swirled caramel-hued topping is exactly what I want to put on top of everything I eat for the rest of time.

OK, maybe I'll swap it out for Hershey's whipped cream every once in awhile. The dark brown can reads "Hershey's Milk Chocolate Dairy Whipped Topping," and the image of the deep chocolate-colored whipped cream is everything I never knew I needed.

While there's no official description of the flavors — beyond the telling Reese's and Hershey's monikers — I'm sure you can use your imagination to guess what these chocolate-inspired whipped creams taste like. Personally, I have a soft spot in my heart for Reese's Peanut Butter Cups, so I am currently dreaming up all of the ice cream combinations that will perfectly complement the chocolate-and-peanut butter goodness that I assume the Reese's whipped cream to be.

Are you pumped about these inventive whipped cream flavors, but also bummed that you don't live near a Hy-Vee? Don't worry about that, because Reese's and Hershey's whipped cream will hopefully make an appearance at more major retailers across the country before summer's end, per Spoon University.

You may have even heard news about these groundbreaking sweets earlier in the summer. Instagrammer @markie_devo posted an image of the Reese's and Hershey's whipped cream cans on his account back in the end of June, and the caption shared a release date of "the 3rd week of July," along with the information that these tasty toppings "will be available at all major retailers."

Well, I guess Reese's and Hershey's whipped cream could take the OTP title this season. You'll just have to wait (and taste!) to find out.