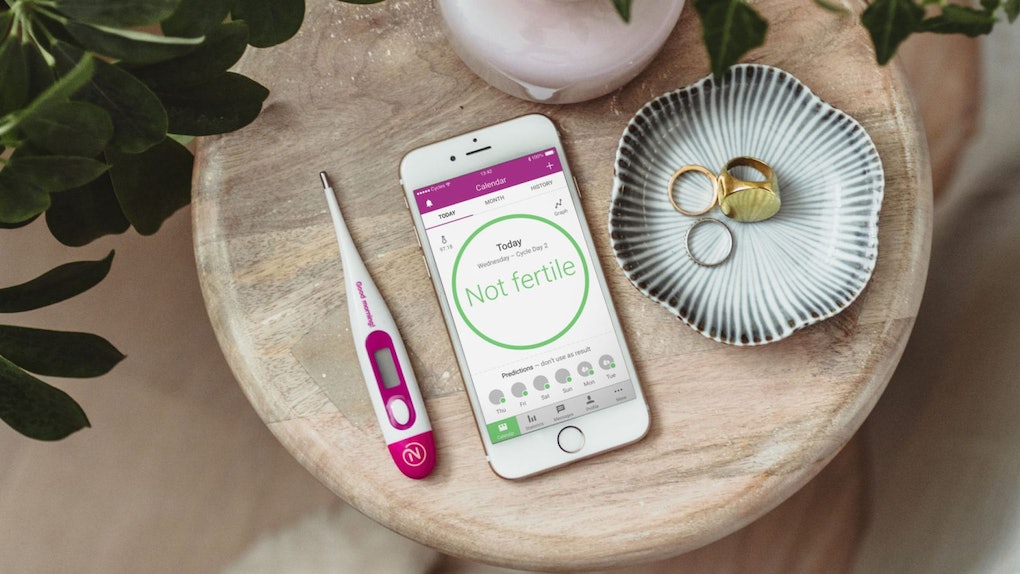 Here's What You Need To Know About Natural Cycles, The Birth Control App Recommended by Apple

If you've visited the Reproductive Health tab in your Apple Health recently, you may have noticed that the number-one recommendation is an app called Natural Cycles. It's not the most-downloaded ovulation tracker (that would be Flo), nor is it necessarily the highest-rated one. However, the app has a bevy of glowing reviews, and Apple is making a deliberate effort to highlight it. But here's what you need to know about Natural Cycles: The app has been scrutinized multiple times since its release in June 2013, not only for its link to unplanned pregnancies but also for releasing misleading ads on social media.

The Natural Cycles app was originally approved by the U.S. Food and Drug Administration (FDA) in August 2018. However, in January 2018, Sweden’s Medical Products Agency launched an investigation after one hospital reported that 37 patients who sought abortions were Natural Cycles users. (It's worth noting that there may have been additional unwanted pregnancies linked to Natural Cycles that did not result in abortions.) And that’s not the only time the app garnered negative attention, either — in late August 2018, the company came under fire for “misleading" Facebook ads that exaggerated the app's effectiveness, and those ads were ultimately banned from the social media platform. The investigation in Sweden, meanwhile, ultimately led to the conclusion that the failure rate lined up with the app’s marketing claims. Still, the company was ordered to clarify the risk of unplanned pregnancies in the app instructions.

In a comment to Elite Daily, Dr. Raoul Scherwitzl, cofounder and CEO of Natural Cycles, said:

"As no contraceptive is 100% effective, pregnancy is a risk with the use of any method of contraceptive. The Swedish Medical Products Agency (MPA) concluded its assessment of Natural Cycles in September 2018 with no issues related to the algorithm or quality of the product. They also confirmed that Natural Cycles is 93% effective with typical use which has always been consistent with what we communicated since being classified as a birth control."

As Vice points out, if you search for “period tracker” in the App Store, a slew of other popular apps like Clue, Flo, and Eve, show up before Natural Cycles (which appears several scrolls down in the results). So, the prominent placement of Natural Cycles certainly seems odd, history aside. At its Worldwide Developers Conference in June of 2019, Apple previewed its watchOS 6 (which is expected to release before the end of this year), and a Cycle Tracking app was just one of the new features that the company announced. Then, on Sept. 9, the tech giant announced the launch of a new women’s health study, which will examine how menstrual cycles can impact screening for certain conditions. And users of the Natural Cycles app will be able to share their menstrual data via a dedicated Research app, which Apple is releasing later in 2019, according to Engadget. (Elite Daily reached out to Apple for comment but didn't hear back at time of publication.)

When it comes to preventing unwanted pregnancy, there is certainly no shortage of options these days, including barrier methods (like condoms), hormonal contraceptives (the pill, the patch, and the vaginal ring), and IUDs. Another option is the fertility awareness method, which involves tracking your menstrual cycle so you know when your ovaries release an egg (and you’re most likely to get pregnant). Natural Cycles gives this last method a high-tech twist, allowing users to digitally track their menstrual and fertility data.

According to Planned Parenthood, the fertility awareness method (also known as natural family planning), is only between 76 and 88% effective, which means that 12 to 24 out of 100 couples who rely on it will get pregnant every year. That’s significantly lower than many other popular methods, like IUDs, which are more than 99% effective. There are several different strategies you can use for fertility awareness, and the more you combine, the more accurately you can assess which days are safe to have sex, (and thus, the more effective this method can be). Planned Parenthood reports that these strategies include taking your temperature every morning before getting out of bed, checking your cervical mucus (vaginal discharge) every day, and charting your menstrual cycle on a calendar. The idea behind Natural Cycles is to simplify all that data collection and tracking.

Here’s how it works. After taking your temperature with a basal body thermometer, you enter that information into the Natural Cycles app, which also tracks your menstrual cycle. Based on those temperature readings and other menstrual info, the app’s algorithm can give you daily updates on where you’re at in your cycle, as well as attempt to predict when you’re most likely to be fertile. Natural Cycles also displays a “use protection” alert on the app when it detects that you’re ovulating. During that time, users are encouraged to either abstain from sex or use condoms (or another barrier method). According to a 2017 study commissioned by Natural Cycles, the app is 93% effective with “typical use,” and 98% effective with perfect use. In other words, seven out of every 100 “typical users” will get pregnant every year.

Fertility awareness is clearly a complex method that requires careful consideration, as well as a combination of multiple tactics, in order to be effective for preventing unwanted pregnancy. And while the Cycle Tracking feature may make it easier to keep track of the required information for this method, it’s still less effective than many other methods, like implants and IUDs. Not only that, but Natural Cycles has admitted that drinking alcohol, having an illness, experiencing disrupted sleep, and other factors can negatively impact the accuracy of its algorithmic fertility predictions.

Remember, you'll need to use the Natural Cycles app perfectly for it to be 98% effective. And if you’re not attempting the fertility awareness method or are uncomfortable relying on an app for pregnancy prevention, know that there are plenty of other popular period tracking apps to choose from. The bottom line is, finding the right birth control method for you is a super personal matter — and the only way to make an informed choice is to be fully aware of the possible risks. Talking through the pros and cons of each method with a doctor may help you to decide which is best suited to you.