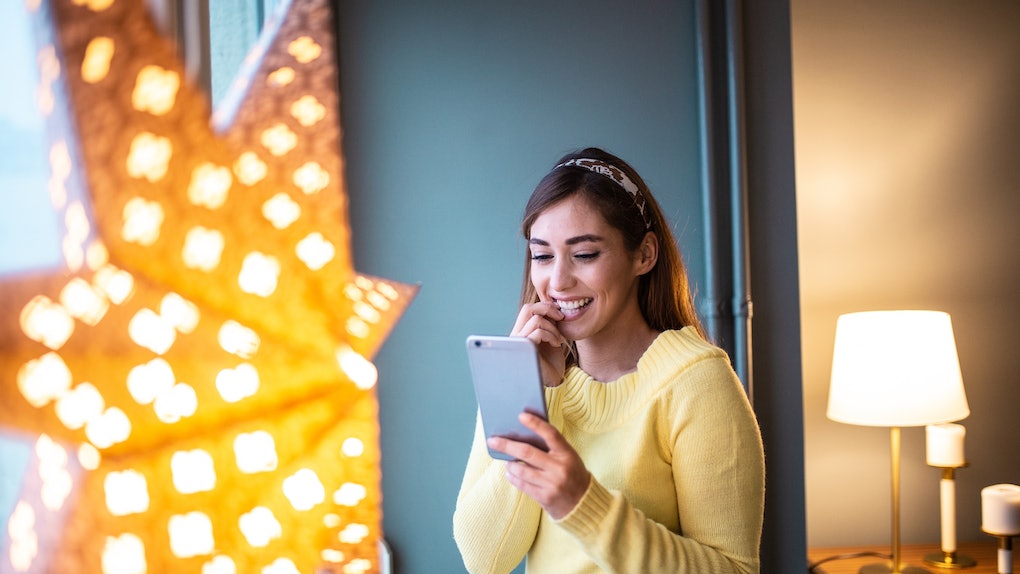 Here's The Dating App Advice You Should Try, Based On Your Zodiac Sign

If you've spent any time playing the swiping game, then you're already familiar with what's great about dating apps, like the convenience and variety of folks you can meet. There are also some aspects of them that aren't so great, like people who aren't on the same page about what they're looking for or, worse, creeps. If you're encountering the latter and want better matches, consider trying dating app advice based on your zodiac sign. For some signs, the advice focuses on changing up the way to use the apps. For others, it’s about being more conscientious about the type of people you’re swiping right on. For instance, are you looking for something serious but only matching with people who clearly aren't ready to settle down simply because they look “fun” or you think you could "change them" (ahem, Cancer and Virgo)? Well, it's time to let the stars take the lead a bit and see what positive effects it can have on your dating app experience.

Aries is confident and bold, so when there's something they want in life, they aren't afraid to go after it. That’s also true on dating apps, where Aries is happy to take the lead and make the first move. That’s great, and you should never feel like you shouldn’t go after what you want, but sometimes it's OK to hold back a bit and see if your match is willing to pursue you a bit in return. You want someone who gets how great you are and doesn’t want you to slip away.

Taurus usually prefers to let people who are interested in them come to them, so this whole dating app thing can feel like a bit of an effort. Taurus would love to find someone perfect to settle down with and start making an amazing life with, but it would be ideal if they didn’t have to do all the work to make that happen. But here's the thing: For a dating app to work, you have to put in a bit of, well, work. Otherwise, they'll never be able to see how amazing you are. If you see someone you like, Taurus, go for it and make the first move.

One of Gemini’s greatest personality traits is their curiosity. They want to understand people and learn what makes them tick. The more mysterious someone is, the more Gemini feels compelled to crack them. But this shouldn't apply to someone who doesn’t reply. Don’t continue to pursue out of curiosity; take the note and move on.

Cancer has a big heart and needs a partner who gets and appreciates them for that. However, they aren’t always so good about matching with people who fit that bill. As a result, Cancer might want to avoid the usual small talk and pose their questions with “how do you feel about XYZ?” so their match bases their responses off emotion. Are they open? Are they closed off? If it's the latter, they probably aren’t going to be a good match for Cancer.

Leos are confident, charismatic, and generous with their heart. Their only weakness is that their ego can make them vulnerable to flatterers. Sure, it feels great to have someone point out all the ways you're amazing, but just make sure they aren't using all those compliments to manipulate you into doing something you don’t want to do. This includes hooking up before you’re ready, or generally settling for less than what you want and deserve.

For someone as analytical and precise as Virgo, dating apps can become a problem to solve rather than a way to meet new people and have a little fun. They scour every photo and bio for any trace of a deal breaker, which, let's face it, is exhausting. Take a breath, Virgo, and have some fun with it. Don't take it so seriously.

Libra is ruled by Venus, the planet associated with love and beauty. This means they're romantic, but also that they can get a bit, ahem, focused on aesthetics — to the point where they don't even bother with the bios. This is how they end up with matches who look hot but just aren’t the right fit. That doesn’t mean you can’t still match with people you're attracted to, just that you need to read the bio and see if you’ll click on other levels as well.

There are two sides to Scorpio: the sexual, confident, aggressive side that the world sees, and the emotional, loving, vulnerable person who they are at their core. For Scorpio to be fulfilled in a relationship, they need a partner who can appreciate and value both of those sides equally. The problem is that sometimes, when Scorpio leads with their intense sexual energy, their matches have no idea what a soulful person they truly are. Play it about 20 percent cooler from the outset, Scorpio. Unless, of course, what you’re after is just a hookup. In that case, just keep doing you, boo.

Sagittarius is the life of the party with their optimistic spirit and joyful sense of humor. They love to have a great time, so their phones are no doubt full of amazing photos taken while partying with friends. But there's also a deeper side to Sag that can get lost, and it's that they're wisdom seekers who want to broaden their horizons through life experience. Instead of photos of you doing a keg stand, make your profile picture the of one of you at Machu Picchu. That's a better representation of who you truly are.

Whatever Capricorn's doing, they're doing with a purpose. Whether it's school, their career, or their dating life, they have an agenda and a goal, and they're methodically working to achieve it. But they've probably heard being that blunt in their bio isn't a good idea. There's a common idea that you have to “play the game” on dating apps. Honestly, Cap, you don't have time for that, and you'll just get frustrated by it. You’re better off just being honest about what you're looking for and the right person who gets it will be the one who matches with you.

Aquarius is rarely in any real rush to settle down. They're very independent and are comfortable in their own company. They also usually have a group of close-knit friends who love and appreciate them for all their quirks. As a result, they're more likely to have a strict set of ideas of what they don't want in a partner or relationship, but not necessarily what they do want. This means people who might be a great fit can pass them by. Take some time to think about what the right fit looks like for you, Aquarius, then get to swiping.

Pisces is the true romantic of the zodiac. In the pursuit of love, they can sometimes brush over red flags as they try to shape their match into their ideal mate, then are shocked when those relationships don't work. While their imagination's one of their greatest strengths, when it comes to matching on dating apps it's time for Pieces to pull their head out of the clouds and really focus on avoiding the obvious mismatches. That's the best way for them to get the happily ever after they’ve been dreaming of.

Dating is tricky, even on apps. A little guidance from the stars, like the above, can give you a bit more direction for finding the right fit and an out-of-this-world romance.