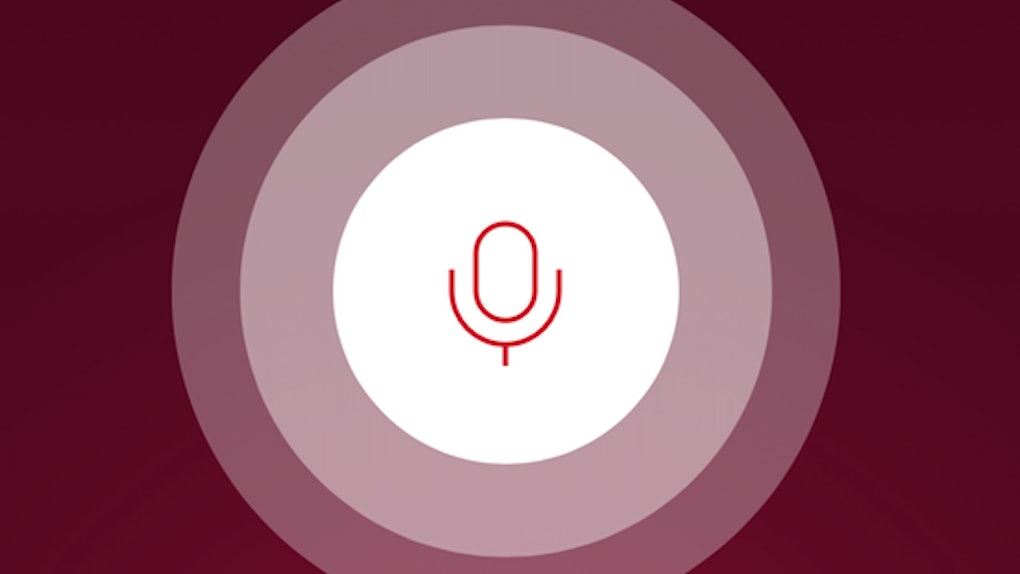 Whether I'm listening to music to relax, to celebrate, to feel some things, or to pump up, I feel like Spotify is almost always there for me. And now that they have a new voice command feature, it feels like Spotify is literally at my beck and call (music-wise), which is all I ever really need in life — especially when I'm itching to hear a specific jam. So since you might be wondering how to tell your Spotify what you want to hear, here's how to use Spotify's voice feature for searching... because sometimes typing is seriously just too much to handle.

There's a chance you've noticed that you — or some of your friends — might not already have Spotify's new voice command feature, and don't worry, because it's probably coming your way soon enough. According to The Verge, the feature was in its test phase for quite a while, but now it finally appears to be in the process of rolling out for Spotify users nationwide. It also seems to predominantly appear on iOS; sorry Android users, because you might be SOL. Elite Daily reached out to Spotify to inquire about the voice command feature on Androids and has not heard back by the time of publication. If you do happen to be one of the lucky ducks already blessed with the voice feature, though, here's how you can actually use it.

Updating the apps on your phone can be annoying AF, but if you want to be able to use Spotify's latest voice command feature, it's just a burden you'll have to bear. Go to the App Store and get 'er done, son.

Press And Hold The Magnifying Glass

A Microphone Will Appear

After holding down the search magnifying glass, you'll see a microphone icon pop up on your screen. Click it.

Tell Spotify What You Want To Hear

After giving you a montage of directions on how to use the voice command feature, you'll finally be able to tell Spotify what you want to hear, at long last. You can request pretty much whatever you want to hear — some top hits, that dorky party playlist you made freshman year of college, the artist you heard at the coffee shop down the street, or any of your favorite songs. You can really request anything that comes to mind once you officially use the feature.

Use Voice Command Whenever!

Since you'll be able to access the voice command feature, it'll remind you to use it when you log back in. It'll definitely come in handy when you're juggling too many things at once, so keep it in mind.

I'm hella excited to use Spotify's voice command feature. Whether I'll be holding on for dear life in the subway without two hand access, or if I'm in the middle of work and craving for chill jams, it's a simple way to listen to whatever I want on-command without having an Alexa or Echo to boss around. The best part for me is that as a non-techy human, it's a really easy feature to navigate — and TBH, it's just what I needed to make my week a little easier.