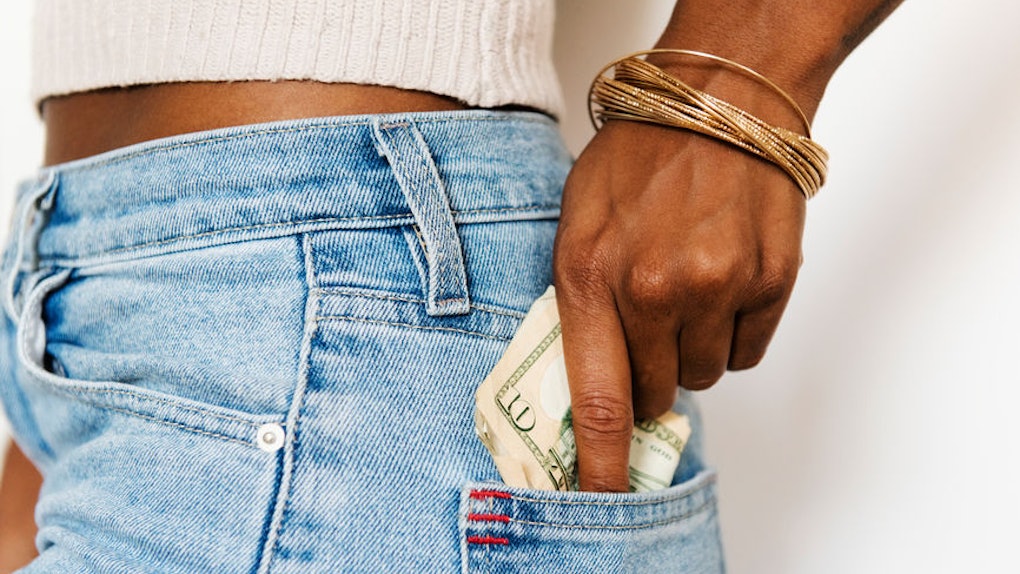 Here's How To Train Your Brain To Save Money, According To An Expert Researcher

Saving money can be intimidating — I totally get it. Welcome to the club, my friend. Keeping an eye on your budgeting and expenses is one of those markers of adulthood that you don't even want to think about, like, at all, let alone actually do. But the thing is, learning how to train your brain to save money may be a lot simpler than you'd expect. The first step, according to the results of a new study, is to recognize what your brain's initial impulses are when it comes to money in general. Spoiler: Your noggin isn't exactly that keen on putting money away, either (I know, I'm sorry).

The new study, which comes from Cornell University and has been published in the scientific journal Nature Communications, suggests that the human brain has an actual bias toward earning money, which apparently translates to you being a lot more concerned with making cash dollars than saving cash dollars. Ugh.

For the study, as per the Cornell Chronicle, researchers conducted a series of experiments with 78 young adults that showed that, when people are equally rewarded for both earning and saving money, they're still more likely to try to earn cash than save it.

Fundamentally it comes down to this: saving is less valuable to our brains, which devote less attentional resources to it. It’s more than a financial problem of making ends meet. Our brains find saving more difficult to attend to.

Though he wasn't involved in this particular study, John Assaraf, a brain researcher, behavioral expert, and author of the new book Innercise: The New Science to Unlock Your Brain's Hidden Power, says this Cornell research really hits the nail on the head when it comes to the difficulties we humans have with saving money. "The brain loves to create habits so it can save energy," he tells Elite Daily in an email. "It’s a lot easier to automatically carry out familiar tasks without thinking about them than it is to innovate."

In other words, if you're someone who's, you know, not great at saving money, then those habits you've already formed around your finances are likely keeping you from seeing new solutions to your budgeting woes.

So listen, if this all sounds uncomfortably familiar, first of all, same. But seriously, according to Assaraf, it's absolutely possible to transform your mindset about money, regardless of who you are or what your financial situation currently looks like. Here are some of his suggestions.

Think about how teeny tiny seeds are, my friends. So teeny tiny, right? Like, tinier than the dime you could use to start your savings account.

The point here is that, according to Assaraf, a great way to start saving money is to think of your savings account like a literal plant you are trying to grow. He tells Elite Daily it's all about putting aside a little something from every paycheck, because each time you do, he explains, you're allowing a "seed" to take root and grow a little more.

I know it seems like way too simple of a concept to actually work, but Assaraf says little changes like this really can shift your subconscious awareness around money over time. "Eventually, these roots will begin to manifest changes that you’re consciously aware of," he tells me over email. "Have faith that the roots are growing beneath the surface, and there is a harvest to come.”

Figure Out How Much Money You Want (Or Need) To Save

Based on what is available to you, try to nail down some specifics on how much money you want or need to save, says Assaraf. You can break this down by week, by month, or even by paycheck, but overall, the goal is to find a strategy that helps you "feel successful and secure with your savings plan," the brain researcher tells Elite Daily. Even if it's just five bucks at a time, it's still better than putting nothing away at all, right?

Using a daily affirmation can be a simple way to consciously shift your perspective around something. Assaraf shares a great example of an affirmation you can use specifically for saving money: "I am so happy and grateful for the fact that I am now saving (your identified amount) each (identified time period or pay period)."

Try to repeat a statement like this to yourself a few times throughout the day, whether it's when you first wake up in the morning, on your way to/from work or school, or before you go to bed at night. Yes, it might feel kind of awkward at first, but hey — after a while, not only might you really start to believe it, but your bank account might just reflect it as well.

As you might have noticed, nearly all of these tips are intangible, meaning they're things you have to think about rather than actually do. And even though it might be a hard concept to wrap your brain around, Assaraf says it really can make a huge difference to simply picture your savings growing.

"See the money going into your account. Feel what it feels like to consistently have your ideal amount of savings building up each week, month, or pay period," he tells Elite Daily. Then take it a step further, he adds, by visualizing "the impact that a solid savings account will have on your life, your family’s life, your friend’s life, the community that you live in, the charities that you want to support, and so on."

Really commit to this visualization, Assaraf says. "Get totally into a mental movie and the emotions," he explains, "as if you were a Hollywood actor or actress pretending that was really happening. This primes your brain to see and feel as if it is real right now."