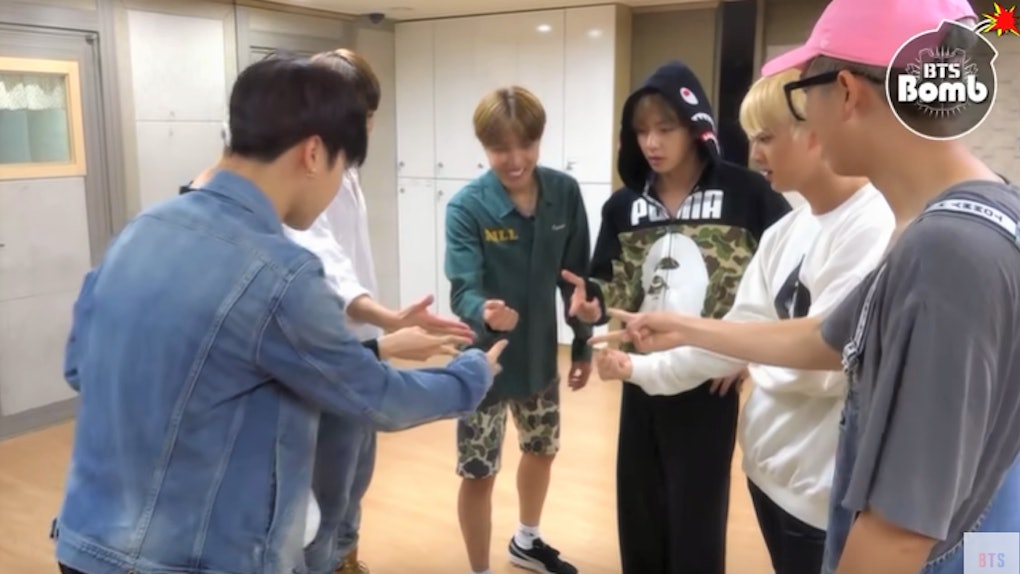 Here's How To Play Rock, Paper, Scissors With More Than 2 Players Like BTS

The depth of BTS' fandom truly knows no bounds. They're paying such close attention always. One thing ARMYs have always wondered about is the way BTS plays Rock, Paper, Scissors. The group always seems to play the game to make any type of decision and the best part is that BTS doesn't play with just two or three members. Oh, no. RM, Jin, Suga, J-Hope, Jimin, V, and Jungkook all get together to play what appears to be a mass game, though the rules are murky when it comes to playing with seven members because, for most people, Rock, Paper, Scissors is a game reserved for two players. Basically, from the outside, it looks very confusing. But clearly, the boys are following some set of rules I and, perhaps, most people are not privy to. So, If you're wondering how to play Rock, Paper, Scissors with more than two players like BTS, I did the research, and it's actually pretty easy.

OK, so everyone knows the basic rules, right? Rock beats scissors, scissors beat paper, and paper beats rock. It's easy enough if you're playing against one other person. When you get three or more folks involved, it can seem hella confusing, but as the BTS ARMY knows, it's definitely possible. So, how is it done?

According to the World Rock Paper Scissors Association, if you want to play RPS with more than two people, it's more of a game of odds and evens based on the RPS hang gestures. Take BTS, for example. There are seven members, right? That means there will be seven gestures, which could be either rock, paper, or scissors.

When everyone throws in a gesture, you need to pay attention immediately so that no one changes last minute. The World Rock Paper Scissors Association states, "everyone in the group plays a gesture and if all 3 gestures are showing everyone plays again." With the example of BTS, if RM, Jin, and Hobi throw rock, Suga, Jungkook and Jimin throw paper, and V throws scissors, since all gestures are represented, they all keep playing.

But if only two gestures are showing, the players with the greater gesture stay in the game and the rest are eliminated.

This pattern continues until you get down to the traditional Rock, Paper, Scissors game between two players or until there's only one person left (the winner).

If there's a lot of people involved, you can split into smaller groups and then the winner from each can compete against each other. Honestly, this all sounds so fun and no wonder why BTS plays RPS any chance they get.

If the rules for playing RPS with more than two players still sound confusing to you (it took me a few reads until I understood, too), how about seeing it in action? Before BTS began their dance practice for "Baepsae," they played a round of Rock, Paper, Scissors to decide who would freestyle at the end of the song.

As you can see, in the first round, the members threw all three gestures, so they all started over. In the second round, Jimin, Jungkook, and J-Hope threw scissors while the rest of the members threw paper, so they won and left the circle (apparently, the LOSER was the one who had to freestyle, because even when you're the best dancers on Earth, you still don't want to be put on the spot). In the final round, RM, Jin, and V threw scissors while Suga threw paper, which meant Suga lost and would have to do the dance solo. (LOL at him collapsing to the floor in agony over his loss.)

It definitely seems like Rock, Paper, Scissors can come in "handy" (see what I did there?) when you're with your friends and can't make a decision. So grab all your friends and get to playing!

More like this
Here's How Meghan, Harry, & Archie Reportedly Spent Mother's Day 2021
By Brandy Robidoux
As @Royal_Suitor, Here's Why I'm Dedicated To Defending Harry & Meghan
By R.S. Locke
Will BTS' McDonald's Meal Include Photocards? Here's What ARMYs Should Know
By Michele Mendez
Stay up to date