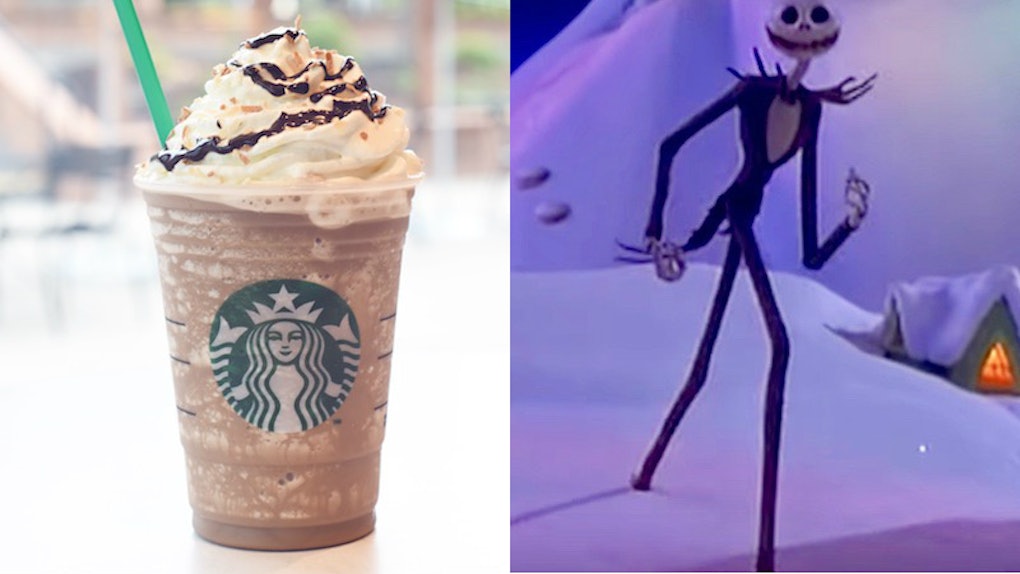 Even though fall has just officially begun, it's never too early to get in the mood for Christmas, too. Personally, I like heading to Starbucks for mouthwatering seasonal beverages and treats. If you're a big fan of classic movies like The Nightmare Before Christmas, you'll want to try out this movie-inspired sweet treat off the secret menu at Starbucks. Named after Jack Skellington, the "Pumpkin King" of Halloween Town in The Nightmare Before Christmas, it's the perfect celebration of Halloween and Christmas all in one drink. Here's how to order a Jack Skellington Frappuccino at Starbucks to take your holiday spirit to the next level.

Even though this isn't an official Disney drink and Starbucks doesn't have an official secret menu, you can get still get what fans have dubbed the Jack Skellington Frappuccino by giving your barista a specific order using items available on the traditional menu. According to Totally the Bomb, you'll want to first ask for a Pumpkin Spice Frappuccino with a mocha drizzle, which will be the rich base of your Jack Skellington drink. Then, add in a shot of chai syrup to give the drink an extra oomph of sugar and spice, add a shot of espresso for a caffeinated kick. Top the drink off with whipped cream and java chips to create the snow-covered peaks of Christmas Town (because they just make everything taste better).

If you prefer a hot drink to warm you up as the weather cools down, there's another secret menu option for you. Just order a Dirty Chai and add pumpkin syrup, whipped cream, and java chips. Like the Jack Skellington, the beverage is bound to transport you to Halloween Town with just a sip.

Again, remember when ordering that Starbucks doesn't have an official secret menu, so you'll have to order exactly what you want. Thankfully, some baristas on the Starbucks Reddit thread also have some suggestions to possibly even make the drink taste better. Reddit user Mister_IceBlister suggests cutting the chai shot from the Pumpkin Spice Frappuccino and subbing the espresso shot for "extra frap roast coffee." MoreEspressoPls thinks subbing Blonde Roast coffee for the frap roast is best, explaining that when frappuccinos are made in the cup and then blended, it won't melt your sip.

No matter how you order it, just remember you're responsible for knowing what goes into it, since it's not an official menu item, so if you don't have the full recipe, your barista might not be able to make it for you. Oh, and showing a little extra thanks in the tip jar will probably be appreciated.

Starbucks fans took to social media to express their reactions about the news of a secret menu item. There were responses filled with both surprise and excitement. Twitter user @Carolina_xx97 wrote: "Starbucks has a Jack Skellington frappe and I don't know how to act!" while user @kings_fan23 proclaimed, "Please tell me the Jack Skellington frap at Starbucks is real."

You'll want to order the secret menu drink as soon as you can, since drinks like the Pumpkin Spice Frappuccino are limited-edition products on Starbucks' fall menu. The Starbucks fall menu hit stores this year on Aug. 27, about a month earlier than the official start of fall, and included a new Pumpkin Cream Cold Brew. Sweetened with vanilla syrup, the cold brew is topped with a pumpkin cream cold foam and a dusting of pumpkin spice topping. It's a caffeinated cold drink that's definitely worth giving a try, since there's been tons of buzz about the new Starbucks product. Of course, the classic Pumpkin Spice Latte also made a comeback. Introduced in 2003, the Pumpkin Spice Latte is still the coffee chain's most popular seasonal drink, and for good reason, since it's packed with flavorful pumpkin, cinnamon, nutmeg, and clove.

It's time to get out there and start experimenting with your Jack Skellington Frappuccino order, because this secret is too good to keep.