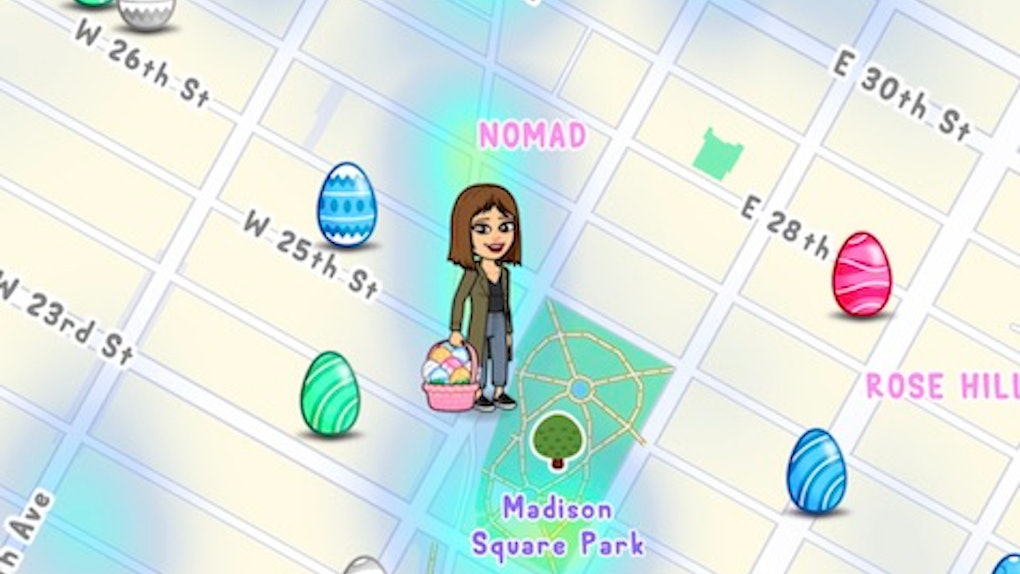 Easter is right around the corner, folks, and there's no better way to get in the spirit of the spring holiday like finding a cute basket and heading out on an Easter egg hunt. This year, you might want to swap out the real basket for a digital one, because Snapchat brought back its own Easter egg hunt that will encourage you to explore your neighborhood and collect as many eggs as possible. Here's how to get Snapchat's Egg Hunt Mini-Game Lenses for Easter 2019, because a little competitive egg hunting never hurt anyone.

If you're ready to hit your neighborhood streets and start collecting digital eggs to populate your digital Easter basket, look no further than The Great Snapchat Egg Hunt, which is back for 2019 with new mini games (more on that in a moment). The Egg Hunt, which allows you to collect virtual Easter eggs with your phone's camera, is available on the app in the U.S. and Canada. It launched on Friday, April 19 at 6 a.m. PT, and it will last until Sunday, April 21 at 9 p.m. PT, per Snap, meaning you have all weekend to explore and collect.

If you're ready to get hunting, you just have to follow a few easy steps for a fruitful Easter egg harvest. First, open up your Snapchat's Snap Map where you'll see a ton of decorated Easter eggs. To collect them individually, physically travel to each egg on the map, which will be scattered at various public locations like coffee shops, malls, parks, and airports, and tap to collect. Each egg is valued at one point, but if you find a rare golden egg, you'll be able to collect five points.

New to the egg hunt this year are the mini games. Thankfully, it's super simple to rack up points with this new feature. To unlock a Mini-Game Lens, however, you're not actually looking for an egg — you're looking for a chick. When you see a chick on your map, you'll automatically unlock a special Mini-Game Lens for the chance to win between three and 10 points, and leave your competition in the dust. To play, you'll tap the chick on the Snap Map and unlock the Mini-Game Lens, according to Snap.

As you collect eggs and play mini games, your score and your friends' scores will be tallied and displayed next to your Actionmoji, on Lenses, and on the Snap Map leaderboard. If you're a competitive egg collector, all the scoreboards make it easy to see where you stand in relation to your competition, but if you're out hunting for fun, you can also totally ignore the scores.

It's also worth noting that the egg hunt is not a race (the eggs don't disappear once someone has found them), so feel free to casually stroll through your neighborhood and explore the new places, sites, and sounds Snapchat brings you to. Since the eggs won't get snatched up at first sight, each Snapchatter has the ability to collect all the eggs on their Snap Map. If you're a Snap user who prefers to stay in Ghost Mode while playing, you can do so — however, you wont be able to see other peoples' scores.

So what are you waiting for? Those eggs won't collect themselves. Happy hunting!