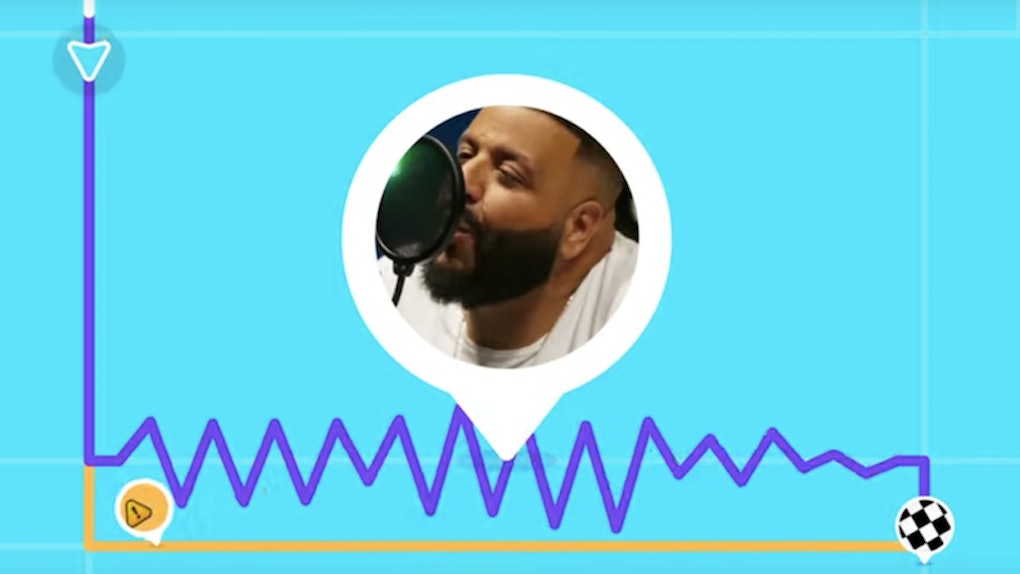 Your summer road trips just got even better, because DJ Khaled will be leading the way during your car rides. No, he won't be co-piloting in the passenger seat (unless you're his BFF, of course). Instead, he'll be the guiding voice in your Waze GPS system, so buckle up. If you have Waze, then you've probably used featured celebrity voices in the past. If you're new to the system, though, I'll show you how to get DJ Khaled's voice on Waze. Thankfully, it's super easy to do — but you'll have to follow a few steps.

First things first: You need to download the Waze app. In order to do so, visit the App Store or Google Play and download whichever version fits your phone. Once you have the app downloaded, go ahead and open it up. When you're on the main screen (which shows a virtual map), hit the magnifying glass in the lower righthand corner of your screen. After a new menu appears, hit the "Settings" button in the upper lefthand corner, and then press on "Voice & sound." Once you're in that category, locate "Voice directions" and scroll until you see an option for DJ Khaled. When you see it, click on it — and then, you'll be ready to go.

That's it, guys. The new DJ Khaled voice feature — which was announced on May 22, per 9to5Google — will guide you throughout your trips with sayings and catchphrases that'll get you totally hyped, like "the journey to greatness begins" and "stay focused." Khaled also uses the platform to plug his latest album, Father Asahd, by saying "don't forget to play Father Asahd on Deezer." Apparently, Waze added Khaled's voice to the app in honor of the album, which officially dropped in May 2019.

Adam Fried, Head of Global Partnerships at Waze, spoke about the company's new feature in a press release. In a release sent to Elite Daily, Fried shared, "We are beyond excited to launch the DJ Khaled voice in partnership with our friends at Deezer. DJ Khaled has one of the most recognizable voices in the industry and is beloved by many of our 115+ million users around the world, so we can’t think of anyone better to safely and entertainingly guide Waze drivers on their journeys."

FYI, Deezer is a music streaming service that offers unlimited (and ad-less) listening for $9.99 per month. If Khaled's voice persuades you to give it a try, you can sign up for a free 30-day trial. In the meantime, you can listen to Khaled's voice while you drive by using Waze to navigate your trips.

Apparently, some people who've already tried it are loving it.

So, what are you waiting for? Grab your car keys and let Khaled guide you. Just remember: "Stay focused."