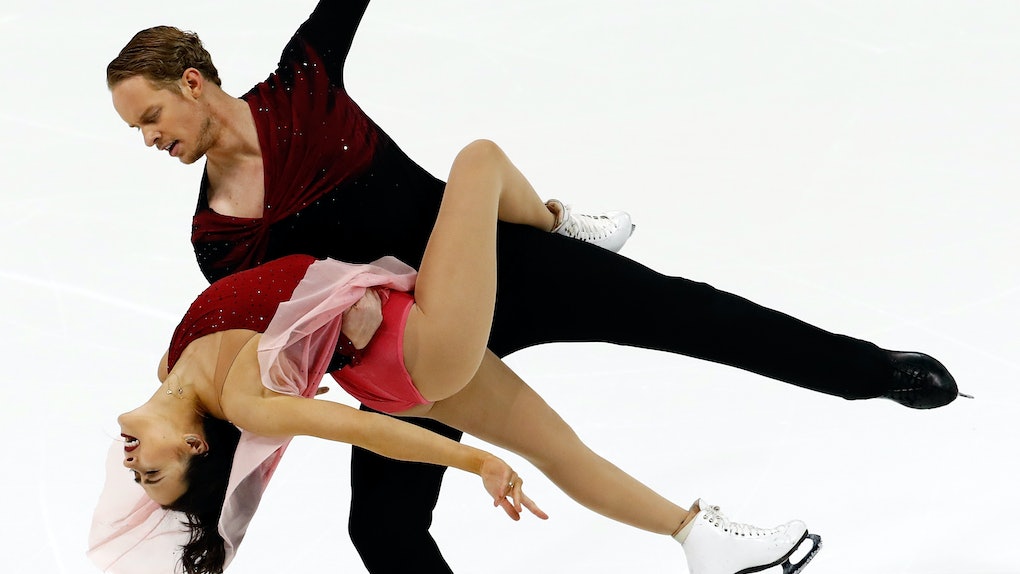 2018 is already better than 2017, and that's because we get to watch athletes break records and perform incredible human feats at the 2018 Winter Olympics, starting Friday, Feb. 8, in PyeongChang, South Korea. I can barely contain myself when thinking about watching the Olympians skiing and skating their hearts out while I lay on my couch and eat an entire bag of Doritos to myself. There is nothing that brings me greater joy. And the Olympians who are a part of USA's Figure Skating team are definitely a force to be reckoned with, considering that some of these 14 athletes are Olympic veterans already. If you're like me, you want to know every detail about these people. How many hours a day do they practice? Do they do anything fun during their downtime? Do they take selfies? Here's how to follow the Olympics Figure Skating Team on Instagram so you can keep up with every twist, turn and double axel these athletes post.

According to NBC Olympics, Bradie Tennell was the "surprise bronze medal-winner at the 2017 Skate America competition in November, vaulting herself into the Olympic conversation" and became "the 2018 U.S. national champion in January, when she was named to the Olympic team" at just 19 years old. Let that one sink in for you.

Just twirling around one-thousand times in under a minute, NBD.

If you're looking for some more laid-back content, you're still in the right place! Because Bradie has fun posts on her Instagram, too, including the cutest #TBT you ever did see:

Dreams clearly do come true! (Not usually for me, but definitely for Bradie.)

Aside from having the BEST first name in the entire world (not biased at all about this or anything), Karen Chen is also an incredibly talented skater who is making her Olympic debut this year. According to NBC Olympics, Chen "won gold at the U.S. National Championship in 2017 and was named to her first world championship team."

You can follow Karen Chen on Instagram under the name @karebearsk8, where she posts photos of herself in Matrix-like poses:

She can also levitate books, so obviously she's a super-human:

Also, that book is actually a biography she penned herself, so you can add "author" to her very long list of accomplishments.

According to NBC Olympics, Mirai Nagasu wasn't named for the 2014 Winter Olympics in Sochi, even though "she earned a bronze medal at the 2014 U.S. Championships." But no worries, because our girl has clearly bounced back and is ready to kick some major butt in PyeongChang.

You can follow Mirai Nagasu on Instagram under the name @mirainagasu, where you'll see photos of Nagasu practicing, traveling, and, most importantly, photos of her very good dog:

And here she is looking like the queen of the ice rink:

You might know Adam Rippon as the openly gay athlete who is hilarious and witty on social media:

But he's also hella talented, and, according to NBC Olympics, "qualified for the exclusive Grand Prix Final in December 2016, and was a favorite to land on the podium again at the January 2017 Nationals." Sadly, Rippon broke his foot while practicing and was forced to withdraw, but his hiatus was brief, and he's now the oldest American male figure-skating Olympic rookie to compete since 1936, which is a pretty big deal.

You can follow Adam Rippon on Instagram under the name @adaripp, and I promise that following him will make you laugh until you cry because his captions are perfection:

Figure-skater Nathan Chen is no-nonsense. According to NBC Olympics, Chen won the 2017 National title and after that, he "won the Four Continents Championship, a major international competition" and "remains a podium threat for PyeongChang after winning the prestigious Grand Prix Final gold medal in December." Well, damn, somebody is looking fierce.

You can follow Nathan Chen on Instagram under the name @nathanwchen, and you'll see he posts pictures of himself being not only great at figure-skating, but also basketball:

And here he is, proving that everyone is powerless when they're up against a fluffy pup:

Want. Need. Must have.

Making his Olympic debut in PyeongChang, Vincent Zhou "could be the youngest member of the U.S. 2018 PyeongChang Olympic Team across all sports," according to NBC Olympics. So, yeah, I guess we could say that he's making some pretty big waves in the competition.

You can follow Vincent Zhou on Instagram under the name @govincentzhou, where you'll see his feed filled with videos of Zhou doing the damn thing:

I mean, can we even?

According to NBC Olympics, "Ice dancers Madison Hubbell and Zachary Donohue teamed up in 2011 and have affirmed their place in the U.S. with three consecutive national bronze medals." The two started dancing together since 2011, and the rest is (Olympic) history.

You can follow Madison Hubbel on Instagram under the name @splashmadison, where you'll find her posting adorable Boomerangs of her and – you guessed it – her partner, Zachary:

You can follow Zachary Donohue on Instagram under the name @zachtdonohue, where you'll see him posting videos of him and – shocker – his partner, Madison:

But seriously, how do they do that without breaking each other's limbs?

Be still, my heart. Madison Chock and Evan Bates are an amazing pair on ice, and their obvious chemistry has led to the two dating in real life. In a video from NBC Olympics, Chock revealed that Bates took her out on a date for her sixteenth birthday. They remained friends until they realized there was something more there and became an item, and I'm not crying, you're crying. According to NBC Olympics, the pair "grabbed four straight silver medals before qualifying for the Grand Prix Final and finishing sixth in that field" in the pre-Olympic season.

You can follow Madison Chock on Instagram under the name @chockolate02, where you'll find her and Bates looking adorable AF together:

You can follow Evan Bates on Instagram under the name @evan_bates, where you'll find even more photos of the two of them looking like the cutest couple in the entire world:

Why can't I become an Olympic figure-skater who finds love on the rink? Life's not fair.

Yep, you read that right: they share the same last name. Not because they're married, but because they are brother and sister! According to NBC Olympics, the pair "competed at the 2014 Sochi Olympics, where they finished ninth" and are known in the skating community as the "ShibSibs," so I think we're done here.

You can follow Maia Shibutani on Instagram under the name @maiashibutani, where she posts flashbacks of her and her older bro tearing up the dance floor when they were pint-sized:

You can follow Alex Shibutani on Instagram under the name @alexshibutani, where he posts photos of him and his sis just a bit older, and just a bit cooler:

They looked pretty damn cool when they were younger though, TBH.

Alexa Scimeca and Chris Knierim started skating together back in 2012, and have since done some pretty big things on and off the ice. According to NBC Olympics, the two won the 2015 U.S. National title, and — NBD — got married in 2016 (with their coach officiating the wedding).

You can follow Alexa Scimeca Knierim on Instagram under the name @alexa_knierim, where you'll see her posting videos of her and her husband practicing some new moves:

You can follow Chris Knierim on Instagram under the name @chris_knierim, where you'll find him posting pictures of his and Alexa's adorable fur-children:

Now this is a family I'd like to be a part of.

So, while there's nothing more incredible than watching athletes compete in the Olympics, it is pretty cool to see what they do in their downtime when they're not busy smashing world records.

Get to following these Olympians pronto, so that you can be in-the-know come February. Happy double-tapping!

More like this
These Tweets About Jimmy Fallon's TikTok Dance Follow-Up Segment All Say It's Too Little, Too Late
By Brandy Robidoux
Is Taylor Swift's "Mr. Perfectly Fine" About Joe Jonas? Sophie Turner's Instagram Has Fans Curious
By Brandy Robidoux
Here's How To Put Multiple Pictures In 1 Instagram Story For All The Photo Fun
By Daffany Chan
Stay up to date