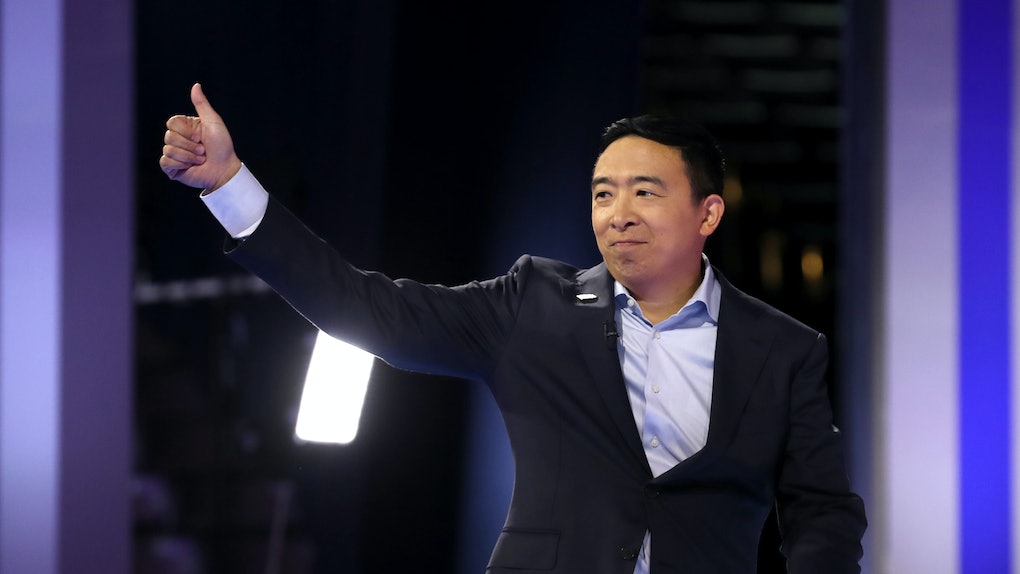 Here's How To Enter Andrew Yang's "Freedom Dividend" Raffle From The Sept. 12 Debate

Ahead of the Sept. 12 Democratic debate, former tech executive Andrew Yang teased on social media that he had "something big" planned. In a brief series of tweets on Sept. 11, Yang dropped numerous hints about what he was planning, ranging from "crowdsurfing in sandals" to donning "ninja-style headwear." But what was Andrew Yang's surprise? During Thursday night's debate, Yang announced an online Freedom Dividend contest in which his campaign will give away $120,000, and anyone can enter.

On Sept. 9, The Daily Show host Trevor Noah said in a segment that Yang orchestrated stunts like crowdsurfing, dancing, and playing basketball at his campaign events in order to get more attention and media coverage.

"Only problem is, Andrew, you realize you're going to have to keep escalating your stunts," Noah said during the segment. "At this rate, in six months, he's going to have to go full Tom Cruise."

In response to Noah's comments, Yang tweeted that he and his campaign had "something big in store!" — and they definitely did. Throughout the week leading up to Thursday night's debate, the businessman teased "#YangsDebateSurprise by nonchalantly tweeting statements like "It seems to me that ninja-style headwear makes everything cooler" and "Two words for the debate stage tomorrow night: Gold chain." As a result, Yang prompted widespread speculation about what he had planned. But Yang didn't actually end up crowdsurfing in sandals or shooting a basket. Instead, when he arrived on the debate stage Saturday night, he almost immediately announced an online contest, which anyone can enter on his campaign website.

During his opening statement at Thursday night's debate, Yang announced that his campaign would be giving away a total of $120,000 to 10 randomly selected families. Each family that his campaign selects will receive an increment of $1,000 per month for a whole year, Yang said, and families will be able to enter this giveaway through an online raffle over the course of the next week.

"When you donate money to a presidential campaign, what happens?" Yang asked the crowd in Houston, Texas. "The politician spends the money on TV ads and consultants, and you hope it works out. It’s time to trust ourselves more than our politicians. That’s why I’m going to do something unprecedented tonight. My campaign will now give a freedom dividend of $1,000 a month for an entire year to 10 American families, someone watching this at home right now."

According to Politico, this raffle is supposed to be a pilot program for Yang's signature campaign promise: the "Freedom Dividend." According to Yang's campaign website, the Freedom Dividend is a universal basic income of $1,000 per month — $12,000 per year — that every American adult over the age of 18 would receive during a Yang presidency. The raffle that Yang's campaign is hosting works the same way, though on a much smaller scale. Yang previously told The New York Times would be a way to grant Americans financial security in an era of automation.

Yang has rather unexpectedly accumulated quite the following; according to Politico, he is polling ahead of more experienced politicians like New Jersey Sen. Cory Booker. As Noah pointed out, Yang has used social media and occasionally-elaborate stunts to generate more attention, and Thursday night was no different. Ahead of the debate, "#ISupportYang" was trending on Twitter, with many of Yang's supporters sharing "#MyYangStory" — videos about why they support Yang's "human-centered capitalism" approach.

As a former tech executive, Yang's decision to host an online raffle is perhaps unsurprising. What remains to be seen, however, is whether or not his campaign giveaway will convince more voters that his "Freedom Dividend" is a viable approach.