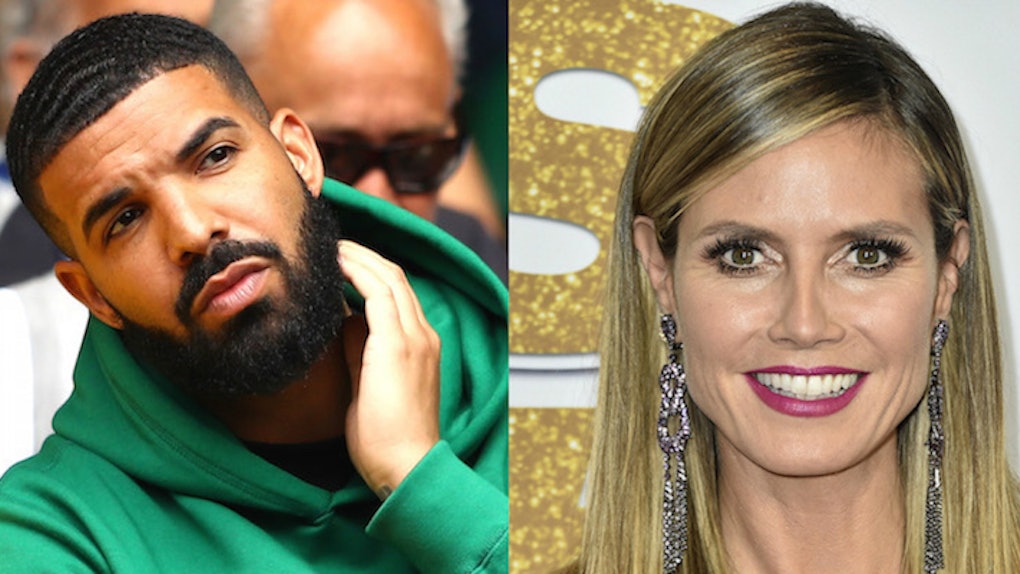 Heidi, do you love me? Sorry, Drake, but no. We all know Drake is a hopeless romantic who has been connected to lots of famous women like Serena Williams, Rihanna, Tatyana Ali, and more, but one woman just revealed she had an almost-relationship with Drake, and by "almost-relationship," I mean he tried to make something happen and she completely ignored his texts. Heidi Klum's story about rejecting Drake will have you feeling more connected to Klum than ever before while also being hella in your feelings for Drake.

In an interview with Ellen DeGeneres on Tuesday, Sept. 11, Klum dropped all of the details about the time Drake tried to get a romance going with her. Keep in mind that the last time Klum appeared on The Ellen DeGeneres Show, she revealed she had a crush on Drake. That's what inspired him to text her, according to Klum, but his timing was off. During that February 2018 appearance on the show, she said she was single and ready to date. The universe had her back, apparently, because barely any time passed between that appearance and her meeting her current boyfriend, Tom Kaulitz. Now that we have the full context, how does Drake come into play? Allow me to illuminate.

After Drake got word that Klum was crushing on him a bit, Klum says he used their mutual connections to get her number. By the time he texted her, however, she had already met Kaulitz. "He did," Klum said when DeGeneres asked if Drake ever hit her up. "Sorry, Drake! Snooze you lose! You know what I mean? He was basically a week too late."

She continued, "I don't remember when it was, and I didn't have his number; he didn't have my number [either]. Someone who I know knows him, and I guess he asked to have my number, and then he texted me. I was like, 'Oh, my gosh. This is so weird!' But I never texted him back, because I found the love of my life." She didn't even say "hey" with an unnecessary amount of Ys back! Even Drake gets left on read, y'all.

I guess one could say that when it comes to dating Heidi Klum, one day you're in, and the next, you're out...

If it's any consolation to Drake, he did lose his chance with Klum to a man she says is the love of her life. Stiff competition there. "You put it out into the universe! You really did," she told DeGeneres about meeting her bae. She continued,

And that was a day, actually, when I didn't want to go out all, because I was working. I came home at night and it was my friend's birthday. He said, 'Please come.' So, I got ready again, I put my heels on and I went to the birthday party—and there he was! It was amazing! So, anyone: The day when you don't want to go out—that's when you have to go out! It's what happened to me! It really did!

Klum said she was so enamored with Kaulitz the night she met him, she couldn't look at him for too long without feeling intense butterflies. "It was to the point so bad that I couldn't even look at him," she said.

"I had to sit next to him instead of across, because then I would have had to look at him the whole time. It was like an immediate [spark]," Klum added. "You know when that eye thing's happening, and you get warm and fuzzy inside? It was like that." Poor Drake. He never had a chance.