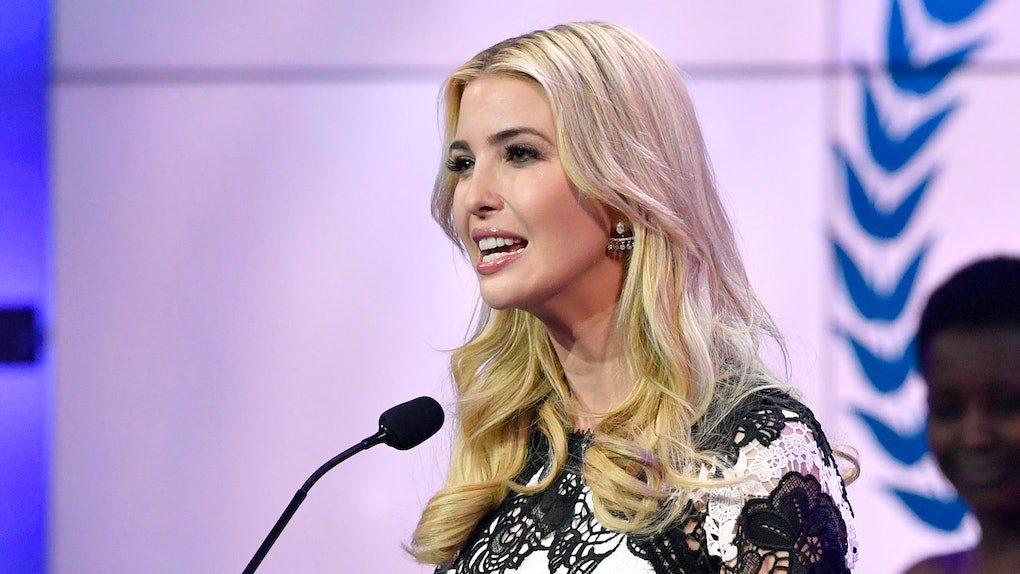 Has Robert Mueller Interviewed Ivanka Trump? She Might Have To Answer Some Questions

Amid reports of controversy pouring out of the White House, Ivanka Trump has seemingly managed to avoid lasting scrutiny. The president's daughter and a West Wing adviser, Trump has largely been omitted from the conservation surrounding the Russia investigation, and people have begun to wonder, has Robert Mueller interviewed Ivanka Trump? It appears that the first daughter hasn't yet participated in the investigation.

Citing unnamed sources familiar with the investigation, Politico reported on Tuesday, May 1, that Ivanka Trump has yet to be called in for questioning by the Mueller team, which is investigating potential ties between the Donald Trump campaign and Russian efforts to interfere in the 2016 presidential election. Elite Daily reached out to the White House seeking clarification about whether she had been interviewed by the special counsel's office, but did not hear back before publication time. In February, Trump parroted her father's line that there was "no collusion" with Russia during the 2016 Presidential Election.

Being that Trump has known professional ties to Russia through her work with The Trump Organization, according to Reuters, and worked on her father's presidential campaign, it struck White House aides and legal experts as odd that she reportedly has not been contacted by Mueller, per Politico.

“Mueller would know that trying to interview Ivanka Trump would be like lighting a match to the highly combustible Donald Trump,” Elizabeth de la Vega, a former federal prosecutor, told Politico. “The team would want to wait to the last possible moment, if at all, before taking that step.”

Matthew Miller, a former spokesman for the Department of Justice, told Politico that abstaining from interviewing Trump could be because every time she was in the room, there were other people there whom Mueller has already interviewed. Or it could be that they're saving the Trump family for the very end of the investigation.

For instance, The Los Angeles Times reported in January that Ivanka had reportedly briefly spoken with Russia-linked officials in a Trump Tower elevator in Manhattan, after the same officials earlier met with Donald Trump Jr. and other Trump campaign surrogates. Elite Daily reached out to the White House for comment on this, but did not hear back at time of publication. At the meeting on June 9, 2016, Trump Jr. reportedly met with Russian lawyer Natalia Veselnitskaya and a Russian-American lobbyist named Rinat Akhmetshin, according to the Associated Press, having reportedly accepted the meeting on the premise that he would be offered damaging information about Hillary Clinton. According to a January report byThe Los Angeles Times, although she was not present for that Trump Tower meeting in June 2016, Mueller was interested in the reported interaction between Ivanka Trump and the same Kremlin-connected officials who reportedly met with her brother.

“In a typical criminal investigation, it’s costless to talk to her, other than your time,” a former Justice Department official told Politico. “But this would not be costless, and that would factor into your calculus: How essential do we think she is? What’s the downside risk of talking to her?”

With reports of Mueller reportedly weighing issuing a subpoena to force President Trump to testify — the Department of Justice declined commenting to Elite Daily about the veracity of that — it has been suggested that the Russia probe might be drawing to a close. At which point, it's possible that Ivanka (and her adult siblings) might be tapped for a formal interview with the Mueller team.

“Hopefully we’re getting near the end," former New York City mayor Rudolph W. Giuliani, who is the new head of Trump's legal team, told The Washington Post on May 1. “We all on both sides have some important decisions to make. I still have a totally open mind on what the right strategy is, which we’ll develop in the next few weeks.”

There are many unanswered questions as to why Ivanka has reportedly been set aside from direct communication with the Mueller team. However, despite Giuliani's hopefulness, it seems unlikely that the investigation is going to wrap up anytime soon. CNN reported that on Tuesday, May 1, Mueller's team asked for a two-month delay in sentencing for former national security adviser Michael Flynn, who pleaded guilty to lying to the FBI.

"Due to the status of the special counsel's investigation, the parties do not believe that this matter is ready to be scheduled for a sentencing hearing at this time," Mueller's team and Flynn's lawyers told a federal court, per CNN.

As excited and hysterical as traditional news media have gotten over the Russia probe, and where President Trump's children stand in all of this, the unfortunate reality is that this is a very complicated and lengthy legal process. No matter how incredulous Jake Tapper gets, or how angry President Trump becomes on Twitter, the legal process has to unfurl. I am tired.