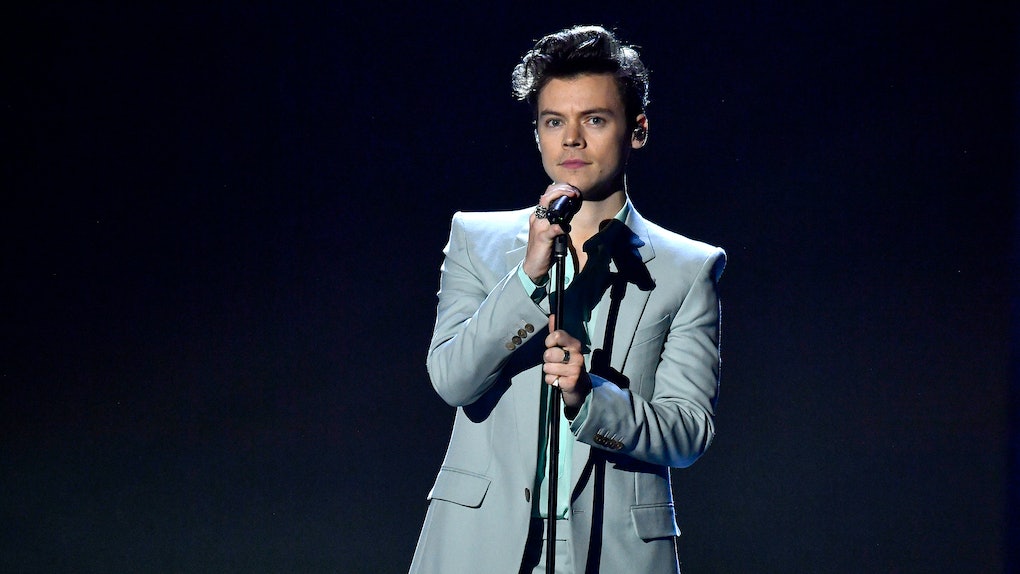 The 2017 Victoria's Secret Fashion Show was filmed on Monday, Nov. 20 in Shanghai, China, and the first photos from the show have finally arrived. Along with the photos of the models looking insanely gorgeous, serving all the looks in their wings and other lingerie, are photos and videos of Harry Styles' performance at the show. Styles was one of four performers to take the stage during the show. Miguel, Leslie Odom Jr. of Hamilton, and Chinese singer Jane Zhang also performed. Harry Styles' performance at the Victoria's Secret Fashion Show was everything we could've dreamed of and more, and I bet you can accurately guess which song in particular from his Harry Styles album he sang. If you guessed "Only Angel," you guessed correctly. If you guessed "Kiwi," that is also correct. If you guessed anything else, I don't know what to tell you other than it's pretty obvious Styles would choose to sing "Only Angel." The lyrics to the chorus are literally, "She's an angel." You know, like a Victoria's Secret angel...

As far as we can tell from the videos posted by audience members, Styles only sang "Only Angel" and "Kiwi." But we'll have to wait for the Victoria's Secret Fashion Show broadcast on Tuesday, Nov. 28 to find out if he sang more off of his first solo album. (Here's how to watch the 2017 Victoria's Secret Fashion Show if you're not sure how to tune in.)

Styles wore a light blue suit while crooning "Only Angel" to the audience that I'm extremely jealous of for being in his general presence.

Here he is cutting a rug!!

Here he is looking angelic.

Here's Harry Styles singing "Only Angel" among the literal angels themselves.

And here he is with his new best friend, Leslie Odom Jr.!! (I don't know if they're actually best friends after sharing this experience, but I'm shipping it, so don't rain on my fangirl parade.)

Harry Styles is my only angel. The song "Only Angel" literally mentions the Victoria's Secret Angels in the lyrics when he sings, "Told it to her brother and she told it to me that she's gonna be angel, just you wait and see," so it's possible this entire song was written with the Victoria's Secret models in mind.

Open up your eyes, shut your mouth and see / That I'm still the only one who's been in love with me / I'll guess I'll be getting you stuck in between my teeth / And there's nothing I can do about it / Broke a finger knocking on your bedroom door / I got splinters in my knuckles crawling across the floor / Couldn't take you home to mother in a skirt that short / But I think that's what I like about it.

I must admit I thought I'd like to make you mine / As I went about my business through the warning signs / End up meeting in the hallway every single time / And there's nothing we can do about it / Told it to her brother and she told it to me / That she's gonna be angel, just you wait and see / When it turns out she's a devil in between the sheets / And there's nothing she can do about it / Hey, hey.

Katy Perry was reportedly supposed to perform at the Victoria's Secret Fashion Show along with Styles, but just like Gigi Hadid, she reportedly couldn't get a visa. Miguel, Leslie Odom Jr., and Jane Zhang were announced as Styles' fellow performers on Saturday, Nov. 18. The full list of performers was revealed to People by the executive producer of the Victoria’s Secret Fashion Show and chief creative officer at Victoria’s Secret, Ed Razek. Razek said in a statement,

We started booking our musical guests months ago when Harry Styles, international superstar, signed on. Also appearing are Grammy award-winning artist Miguel, Tony award-winning star of Hamilton Leslie Odom Jr., and Chinese sensation Jane Zhang. We are incredibly thrilled to have them with us.

More like this
Here's Why EXO's BAEKHYUN, CHANGMO, & Raiden's "Runner" Is The Perfect T1 Theme Song – EXCLUSIVE
By Michele Mendez
Are Meghan & Harry Getting Paid For Their Netflix Show? Here's The Deal
By Sydney N. Sweeney
Hailey Baldwin's Quotes About Being Rude To Her Waitress Cover A Lot Of Ground
By Brandy Robidoux
Stay up to date