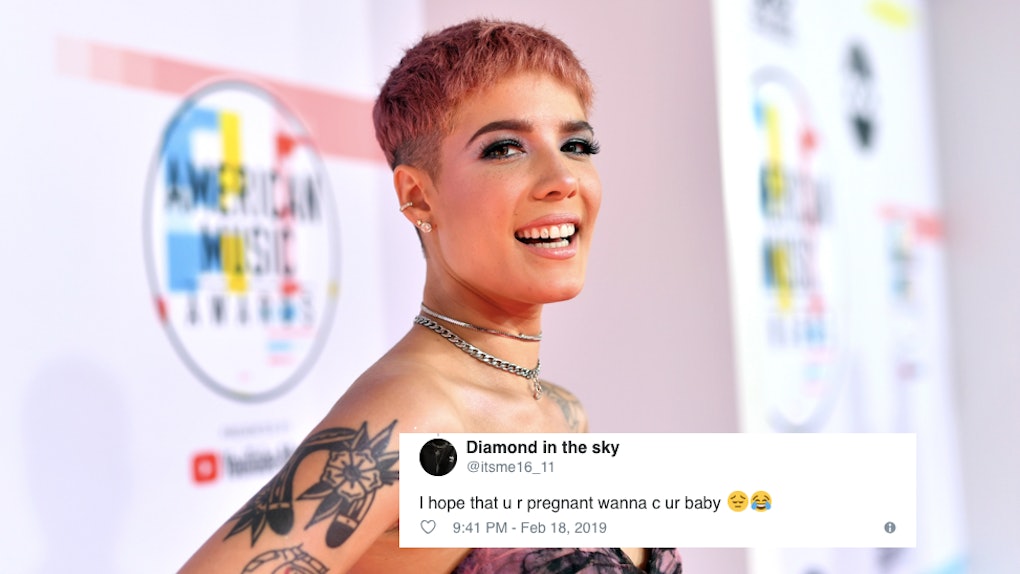 Halsey's Response To Pregnancy Rumors Is So Hilariously On Point

You most definitely have been taught never to ask a woman if she's pregnant, but it seems like that rule simply doesn't exist in a place called the internet. The latest celeb to fall victim to that (very personal) question is Halsey — who has a reported new boyfriend, musician Yungblud — and she is not here for it, you guys. Honestly, Halsey's response to pregnancy rumors should be framed and put up on a wall as decoration, because it's all sorts of amazing.

So, how did we even get here? Let me briefly explain: Halsey and Yungblud have been linked together these past few months, according to reports. Just last month, they were spotted together kissing in West Hollywood on Jan. 31. Scandalous!

Before that, Halsey and Yungblud were photographed leaving a Los Angeles recording studio together on Nov. 21, where it was reported that Halsey was holding a bouquet of flowers. A source told E! News that "It was so obvious there was something going on, they were so close. She was definitely feeling him, from what I could see it definitely seemed there was an attraction." Elite Daily reached out to both teams for comment on the dating rumors, but did not hear back by the time of publication.

OK, so now that we're all squared up on where Halsey is at, it's time for the absurd pregnancy rumor that fans are believing. Where the hell did this idea come from? Well, on Monday, Feb. 18, Halsey took to Twitter to share some big news that she promised would make her fans "explode into actual pieces" when they heard it. She wrote,

I have The Biggest Secret (unrelated to the album) and when u guys hear it, some of you are gonna explode. into actual pieces.

OK, to be fair, Halsey did give fans a pretty big opening for questions revolving around pregnancy, but c'mon! This is totally not the way Halsey would announce that she's pregnant (or, at least, not the way I predict she would make the announcement). But that didn't stop anyone from speculating:

But don't worry about trying to convince fans that Halsey is not with child, because our girl is doing it her damn self.

She went back on Twitter later that same day to shut down the rumors that her big secret is that she's pregnant.

"People think my last tweet is me hinting I’m pregnant," Halsey wrote in her tweet. She continued, writing, "Which means I’m either: a. gaining weight b. acting weirder than usual jokes on u, I’m doing BOTH! however STILL not pregnant!"

Do you hear that, world? Halsey DGAF about those rumors, and our girl has got jokes instead! Can I please be Halsey when I grow up?

Fine, I'd be happy even just being her understudy.

It's pretty obvious that Halsey tells it like it is in all aspects of her life — even when it comes to her on-again, off-again relationship with ex-boyfriend, rapper G-Eazy. During her Saturday Night Live performance on Feb. 9., she alluded to the fact that G-Eazy may have cheated on her (multiple times) throughout their relationship, and made it crystal clear how she felt about it with a glorious and powerful backdrop on stage:

So get with the program, people. If Halsey wanted to tell us she's pregnant, she'd do something way more inventive than post about it on Twitter. Halsey is better than that, and you know it.