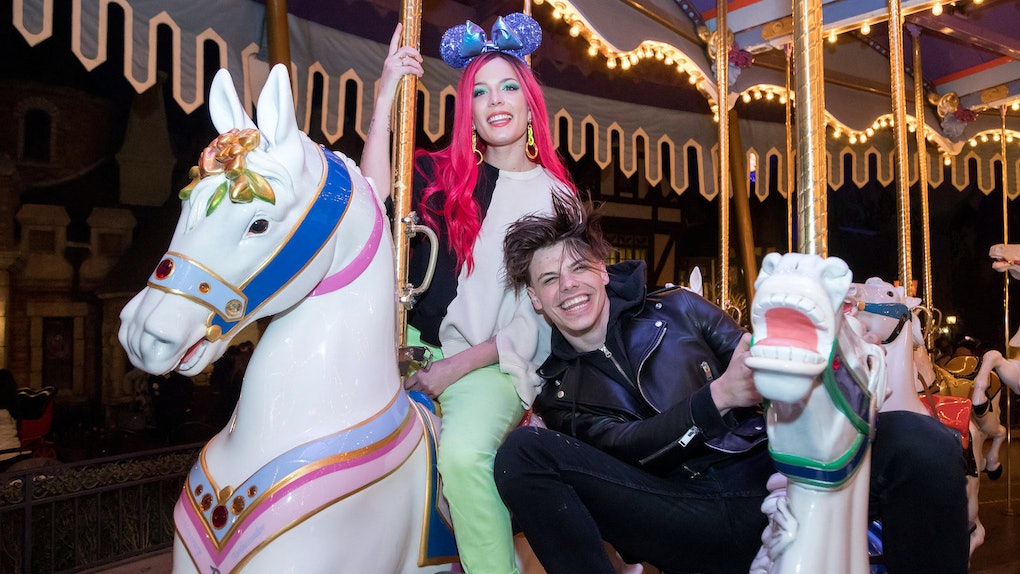 Halsey & Yungblud Walked The iHeartRadio Awards Carpet Solo, But Hit The Stage Together

Over the past couple years, Halsey has exploded into one of the biggest pop artists of the moment in a very short time, so it is no wonder why she is dominating the nominations at the iHeartRadio Music Awards this year. But along with her skyrocketing success, the singer's personal life has also become very public. Her high-profile breakup with G-Eazy made waves last year, but now, it looks like Halsey is moving on with a new singer. So, is Yungblud at the 2019 iHeartMusic Awards supporting his rumored girlfriend? Here is what fans of the rumored romance should know.

Although Halsey and Yungblud have yet to officially confirm their relationship, the collaborators have been getting very close over the past few months, and love to leave flirty messages for one another on social media. Elite Daily previously reached out to Halsey and Yungblood’s teams for comment on the dating rumors, but did not hear back by the time of publication. Those dating rumors grew even larger when Yungblud showed up at the iHeartRadio Music Awards. Both of the singers were set to perform at the show as well. Halsey opened the show with her hit single "Without Me," and then Yungblud joined her on stage for their duet "11 Minutes" along with Travis Barker.

Unfortunately for fans of the budding relationship, Halsey and Yungblud did not take red carpet photos together, but they both chose to rock monochrome, black-and-white looks for the event. Halsey showed up in a menswear-inspired dress shirt and bowtie, and Yungblud brought the edge in all leather. Check out the red carpet looks below:

Rumors began flying about a possible romance between Halsey and Yungblud last fall after the two were spotted kissing in Los Angeles. The musicians recently collaborated on a new single called "11 Minutes," which was released last month. The cinematic music video for the pop-rock track stars Halsey and Yungblud as doomed lovers, and they have talked about their flirty relationship in interviews about the song. Halsey revealed to Billboard that she slid into Yungblud's DMs with her phone number and a heart, and joked that she was a "cougar" for going after someone three years younger than her. The couple was again caught making out with one another courtside at a Los Angeles Lakers game a couple of weeks ago. The rumored relationship could mark Halsey's first public relationship since breaking up with G-Eazy last year.

Although Halsey and Yungblud have yet to officially say that they are dating, the sparks of romance between the two seem pretty clear. The alt rocker is currently on tour in the United Kingdom, but clearly took a quick break to be at Thursday night's awards show.

The iHeartRadio Music Awards promised to be a major night for Halsey. The pop singer performed during the show, and has also already been announced the winner of the Fangirls Award. Not only that, but Halsey is also up for three more major categories: Best Cover Song for her cover of Juice Wrld's "Lucid Dreams," Best Lyrics for her chart-topping single "Without Me," and the big one, Female Artist of the Year. Halsey faces some stiff competition for the Female Artist of the Year trophy, though — she is up against Ariana Grande, Camila Cabello, Cardi B, and Dua Lipa for that award.

While the iHeartRadio Music Awards were always going to be a big night for Halsey, it became an even bigger night for her as the first big awards ceremony outing for her and her new rumored boyfriend, Yungblud.